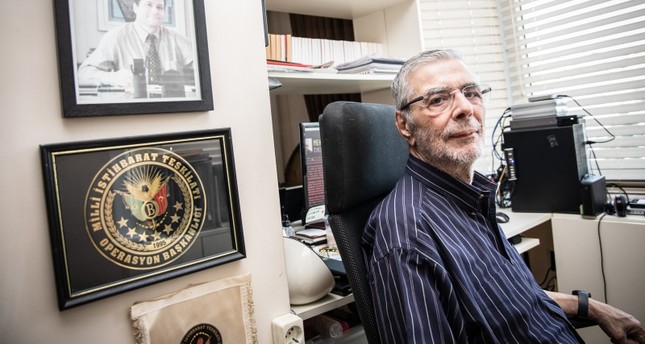 The founder of the counter-terrorism department of Turkey's National Intelligence Organization (MIT) has claimed in his new book that he warned U.S. Central Intelligence Agency (CIA) about the Sept. 11, 2001 terrorist attacks 40 days in advance but his warning went unnoticed.

"I have heard about the 9/11 attack 40 days before it happened. We warned CIA and some colleagues about it, but they didn't take much notice," Mehmet Eymür said Friday in an interview with the Demirören News Agency (DHA).

According to his new book "Deşifre (Decipher)," which will hit the bookstores on Saturday, Eymür, who was in the U.S. during that time, was informed of the attack staged by al-Qaida terrorists through a source he reveals as a Turkish drug dealer called Mustafa.

Noting that they have shared the intelligence with the CIA, Eymür makes the following remarks in the book:

"I have informed them (CIA) that I would like to meet regarding an important issue. We agreed to meet at my house the next day. A woman I knew came along with a man whom I saw for the first time on August 2, 2001. I have told Mustafa to wait at a hotel in case they want to interview him as well. I shared the information with them by checking in with my notes in Turkish."

Eymür said that the CIA had shown no interest to the intelligence and added, "40 days after the meeting, one of the deadliest terror attacks in the history of the United States occurred, the 9/11. Nearly 3,000 people were killed. If Mustafa was taken seriously, maybe this incident would have been prevented."

The deadliest attack on U.S. soil also left some 6,000 injured. The attack prompted the U.S. invasion of Afghanistan in October, drawing the country to its longest conflict that continues to this date and costing nearly 200,000 lives and displacing millions of others. It also pushed the U.S. to adopt a more hawkish stance in the Middle East, culminating in the U.S. invasion of Iraq in March 2003.

The retired spy adds in the book that the U.S. intelligence agencies contacted him after the attack and he brought together Mustafa with the Federal Bureau of Investigation (FBI) and the CIA. Eymür adds that he later met with Mustafa for about 20 minutes, in which Mustafa told him that his meetings with the CIA and FBI were not fruitful due to language issues.

"I gave CIA his name but only his name. I did not want him to suffer. I do not know if he is still alive, never seen him since," Eymür told DHA.

"The 9/11 was a disaster, thousands have died, the World Trade Center collapsing. I was in the United States back then. We have watched the towers collapse as if it was a movie," he said, adding that maybe the issue will now be covered in the U.S. media.

Starting his career in the MIT in 1965, Eymür worked for the MIT for over 30 years and he is one of the highly popular and highly controversial members of the agency.

The "Deşifre" also contains other spy stories, espionage and counter-espionage acts and Eymür's insights and experiences on the job. Eymür previously wrote three books also focused on his career in the MIT.

Share on Facebook Share on Twitter
Previous in Turkey Amid curious looks of locals rushing to take photos, an Airbus A330... Next in Turkey Restoration on a Byzantium-era palace located in Istanbul which is...
DAILY SABAH RECOMMENDS