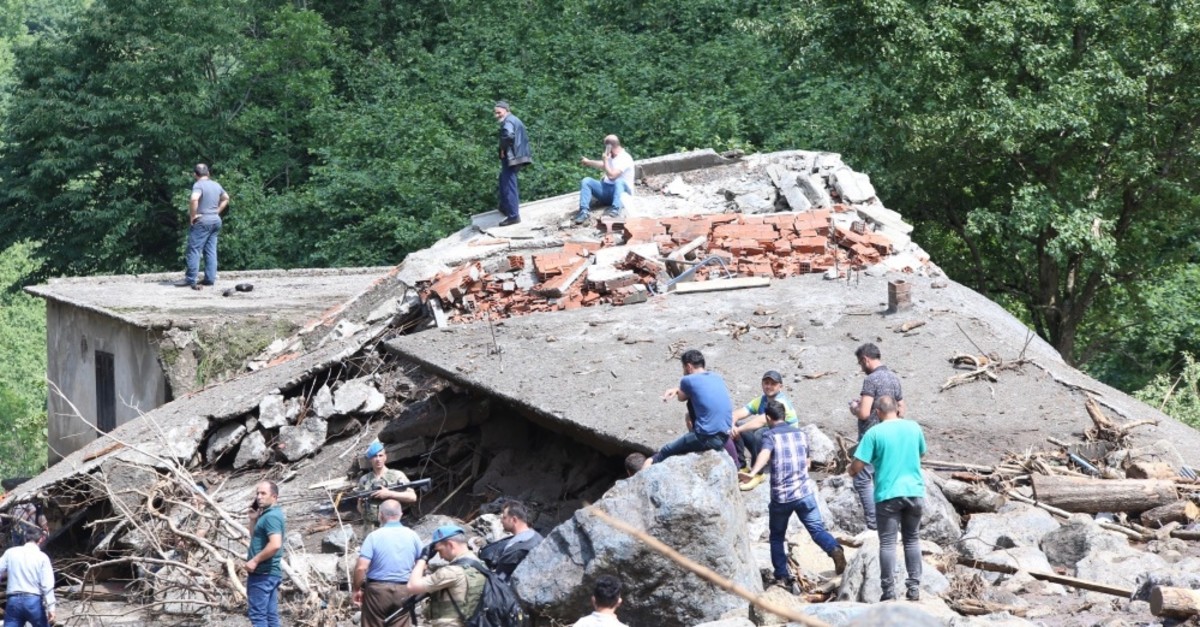 The floods hit Araklı's Çamlıktepe and Yeşilyurt neighborhoods after a nearby stream overflowed following sudden and heavy rainfall. Firefighters were immediately dispatched to the scene but had difficulty reaching the affected areas as debris brought by the floods blocked the roads. The Disaster and Emergency Management Presidency (AFAD) and gendarmerie units were also called in to help with the rescue efforts.

Authorities announced that floods inundated a school, three houses and two businesses and dozens were evacuated from two neighborhoods. An emergency desk was set up following the disaster while ministers and Mehmet Güllüoğlu, head of the state-run AFAD visited the flooded areas. The flood risk is not over, weather forecasters warn as the region, prone to regular rainfall throughout the year, will likely have severe rainfall for the next five days.

Local officials urged locals to stay away from the affected neighborhoods. Still, some arrived yesterday to see the state of their houses outside. Watching their houses covered with mud and partially crushed by rocks due to landslide, locals described the disaster they narrowly escaped alive. The floods, which came after a small-scale flood hit the same area last week, caught locals off guard. One of the victims who died in the floods was a municipal worker who was among crews clearing the damage from last week's flood. Other victims included an imam and a shopkeeper.

The missing people were described as three municipal workers who were working to help in evacuation efforts. Locals said they fled their houses and ran to higher ground as the streets were inundated.

Halim Köse, a local who was among those evacuated by helicopters, said it was the sixth time he witnessed such a severe flood in Araklı. Köse told Demirören News Agency (DHA) that he was at home when the disaster unfolded and it was like "a bomb exploded." "I noticed that the river waters were heading to us. I phoned my relatives and told them to run away after I heard a big noise. It was like a tsunami," Köse said. Havva Cevahir, whose aunt's husband is among the missing victims, said her teenage son helped evacuate people who were trapped at a school while they were cleaning it and led people to safety in other places.

"He also found two children stranded at school and rescued them. But we preferred to stay here," Cevahir said, adding that she and her neighbors took shelter in a house on a higher ground.

Interior Minister Süleyman Soylu, who was a former lawmaker from Trabzon, joined Agriculture and Forestry Minister Bekir Pakdemirli for a visit to the flooded areas yesterday. Soylu told reporters that the epicenter of the disaster was the confluence of two rivers and heavy rainfall hitting a hill where the neighborhoods are located triggered landslides. "Cleaning crews were working here in the aftermath of last week's floods. They were on a lunch break when the flash floods hit," Soylu said. He said that the severe floods tore apart seven buildings, "leaving behind only their foundations." "We have 280 crews on the field searching for victims," he noted. Soylu said the state would compensate the locals for property losses after examination of the flood-hit areas. The minister said the area was exposed to such disasters due to rough terrain and the measures were in place. Bekir Pakdemirli said that his ministry's meteorology service had issued warnings to local people earlier about the heavy rainfall.