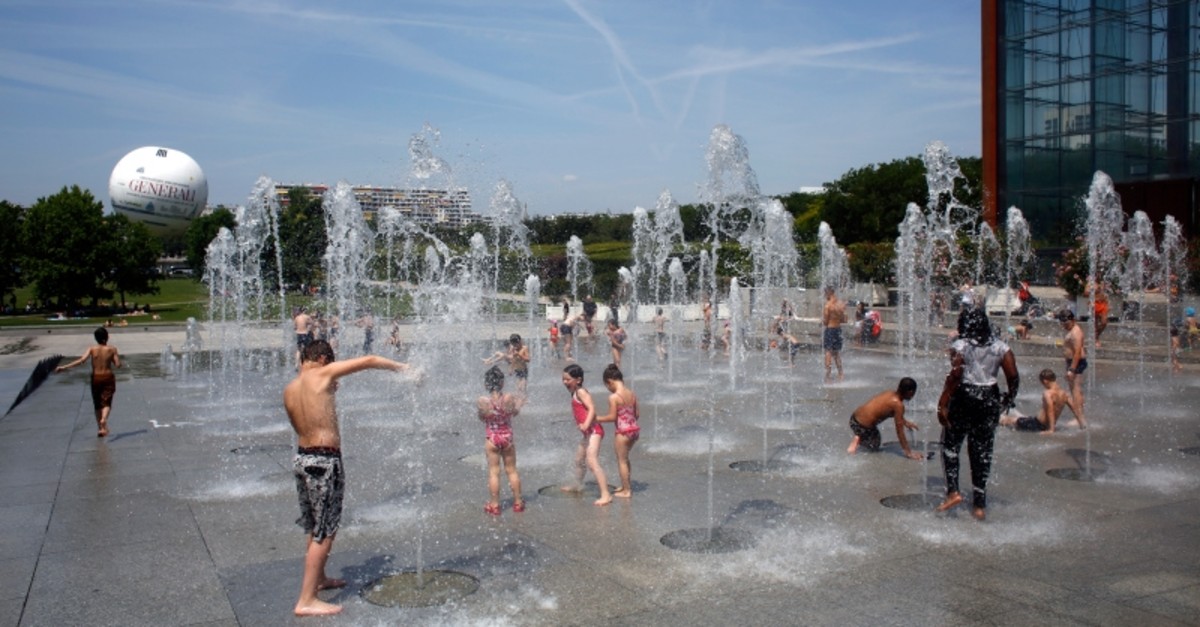 Amid already above-average temperatures, meteorologists in Turkey and across Europe are warning that temperatures will continue to sizzle for the next two weeks as a heatwave from Africa and the Middle East sweeps the region.

Meteorologists in Turkey are warning residents and visitors to avoid excess sun exposure during the hottest times of the day in the southern regions of the country, where temperatures are expected to exceed 40 degrees Celsius (104 degrees Fahrenheit). Children, elderly, pregnant women and those with health problems are especially at risk, authorities cautioned.

In western Aydın province, temperatures hit 43 degrees, as tourists visiting the Aegean coastal districts of Didim and Kuşadası sought relief under beach umbrellas or in the sea.

While the temperatures in Istanbul and the Marmara region are hovering over 30 degrees this week, high humidity has left residents sweltering.

"The humidity rate in the city is estimated to be up to 55-60%," Ahmet Kocaman, director of the first region under the Turkish State Meteorological Service (TSMS), told Anadolu Agency. "The temperature will feel higher because of high humidity."

A cold front will move in from the Black Sea on Saturday and Sunday, providing temporary relief and possibly some rain before temperatures pick up again next week, Kocaman said.

According to the TSMS, Istanbul sweated through its hottest May in 69 years last month, with temperatures exceeding 35 degrees in some parts of the city.

In Germany, official weather service DWD said temperatures would reach 38 degrees on Tuesday as a heatwave dubbed Ulla makes its way across the country.

DWD meteorologist Sabine Krueger said the weather was due to break records on Wednesday, with temperatures of 39 in the region around Frankfurt and above 40 in some other places.

Germany's highest-ever temperature was recorded on Aug. 7, 2015, in the Bavarian town of Kitzingen at 40.3 degrees, according to the DWD.

The eastern state of Brandenburg raised its wildfire risk level to 5, the highest possible. The same risk was declared in parts of the states of Mecklenburg-Vorpommern and Lower Saxony.

French weather agency Meteo France issued an orange "heatwave" warning for large parts of central and eastern France, warning of temperatures rising up to and beyond 40 degrees.

In Paris, city authorities are setting up extra drinking fountains and water misting devices. Swimming pools will open late and air conditioned spaces will be opened in the afternoons for vulnerable people.

In Italy, weather website IlMeteo.it warned of a bout of "explosive heat" also pushing temperatures to 40 degrees and beyond in northern cities like Milan and Bologna, and in the island of Sardinia.

According to the website, it could be the warmest June to date in certain parts of Italy, with temperatures peaking between Thursday and Friday.

In Britain, the Met Office said there was a "slight chance" that the country could break the record for the highest June temperature, 35.6 degrees.

The Met Office forecast hot and humid weather for the rest of this week, and issued regional warnings for thunderstorms preceding the heatwave.

As hot weather spread also to Austria, the city of Innsbruck gave carriage horses a day off given that temperatures were expected to climb above 32 degrees.

Last year, the city authority introduced a ban for tourist carriages at or above this temperature.

Farther south, temperatures were expected to reach 37 degrees on the Adriatic coast of Slovenia and Croatia. Storms were predicted in Croatia's eastern flatlands, possibly affecting busy traffic routes linking Germany and Austria to Greece and Turkey.