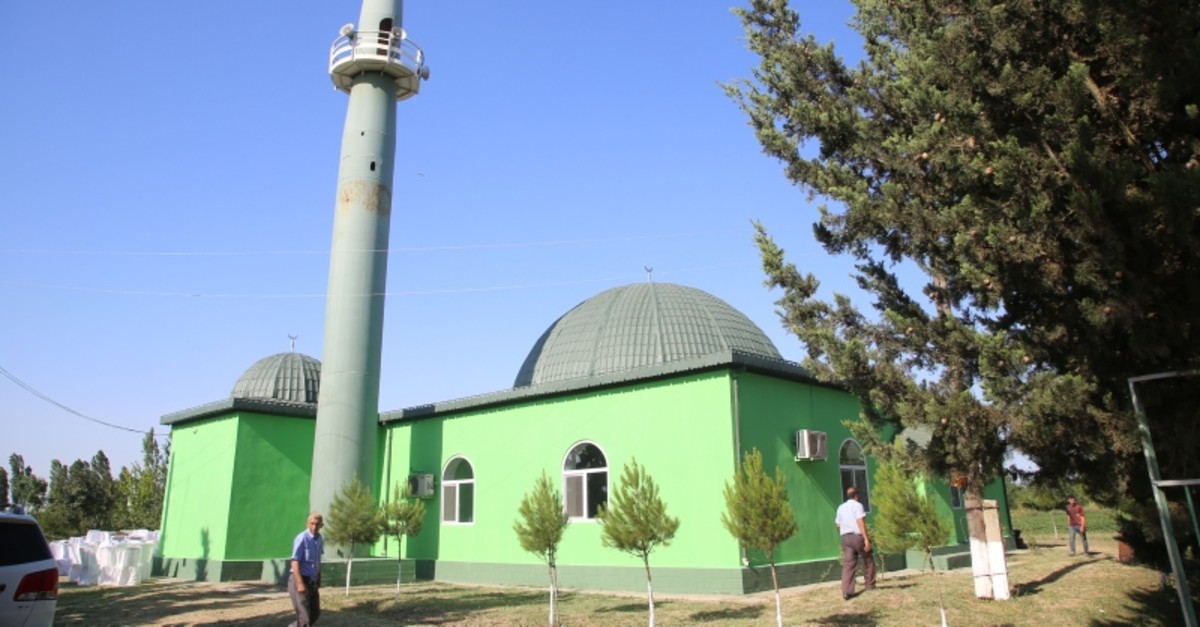 A mosque belonging to Ahıska Turks located in the Saatly district of central Azerbaijan was opened to prayer on Wednesday after being restored.

The mosque in the Samada village was restored with the contributions of World Union of Ahıska Turks based in northwestern Turkey's Bursa province.

Speaking at the inauguration ceremony of the mosque, Chairman Ziyatdin Kassanov said that the union has been working for 11 years to solve the problems of Ahıska Turks.

The union's main goal is to earn back the rights of Ahıska Turks and provide for the return of relatives to their motherland in Georgia, Kassanov said, noting that the governments of Turkey and Azerbaijan have been supporting them in every aspect.

With the support of Turkey's state-run Turkish Cooperation and Coordination Agency (TIKA), a group of 40 Ahıska Turks living in Kazakhstan recently returned to their homeland, the agency said in a statement on June 21.

Kassanov stated that, to date, approximately 600 Ahıska Turks have been granted the right to return to Georgia.

Azerbaijani Deputy Aflatun Amashov said at the ceremony that they want Ahıska Turks to have the right to return to their motherland, though they have no wishes for them to leave Azerbaijan.

"Azerbaijan is more beautiful with you. You make Azerbaijan rich and powerful," he added.

Mahmut Ağırman, the education counselor at Turkey's Baku Embassy, said that they see the children of Ahıska Turks as their own and would provide any and every support for their education.

The inauguration ceremony was attended by Kassanov, Ağırman, Amashov, Azerbaijani parliament member Tahir Karimli and residents of the Samada village.

Some 92,307 Ahıska Turks – also known as Meskhetian Turks – were expelled from Georgia's Meskheti region by Soviet leader Joseph Stalin in 1944, according to the World Ahıska Turks Association.

Millions of other Muslim or Turkic peoples including Crimean Tatars and northern Caucasian peoples such as Chechens were subjected to forced deportations in 1943 and 1944 over accusations of collaborating with invading Nazi Germany. Hundreds of thousands died on the road to Central Asia and Siberia while survivors were not allowed to return to their homeland until the late 1980s.

During nearly 40 days of deportation from their homeland to Uzbekistan, Kazakhstan and Kyrgyzstan, around 13,000 Ahıska Turks lost their lives due to hunger, cold and diseases, the union said.

Around half a million of Ahıska Turks live in Turkey, Kazakhstan, Russia, Azerbaijan, Kyrgyzstan, Uzbekistan, the U.S. and Ukraine.

A law adopted by the Georgian Parliament in 2007 allows Ahıska Turks living in Central Asian countries to return to Georgia and conditionally regain their citizenship.