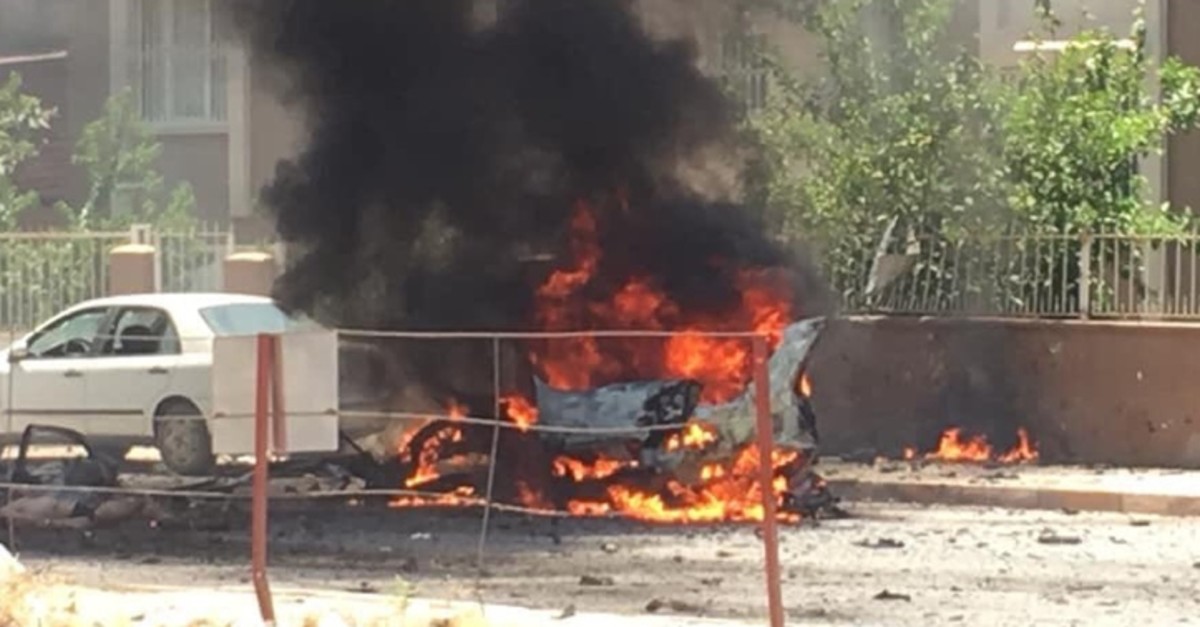 Hatay Governor Rahmi Doğan said two Syrian nationals inside the car were killed in the explosion and the subsequent fire, and one other person was injured, who later died at the burn unit in Iskenderun State Hospital.

Soon after the blast, President Recep Tayyip Erdoğan said initial findings showed that the incident may be terror related. "It is apparent that a bomb was inside the car and those inside were Syrian nationals. All three of them died," Erdoğan said.

Interior Minister Süleyman Soylu later said the blast is believed to be caused by a handmade explosive. He said the three Syrian nationals involved in the incident were living in Turkey under temporary protection.

The blast took place some 750 meters away from the district governorate building in the town center. Initial reports said that the car, registered in Syria and bearing a temporary Turkish license plate, was parked when the blast happened, but it was later revealed that it was on the move.

It was claimed that the target of the bomb-laden vehicle was people leaving Friday prayers at the nearby Fatih Sultan Mehmet Mosque located some 50 meters away from the blast scene.

Reyhanlı borders Syria and the town center lies to north of the border, while the Cilvegözü border gate, a main crossing into Syria, is some five kilometers away. The district has been home to a large population of Syrian refugees since the conflict erupted in Syria.

In addition to killing 53 people and injuring dozens of others, the attack devastated the district, damaging 912 houses, 891 businesses and 148 vehicles. It was the deadliest attack in the country at the time.

The attack was staged by the armed terrorist group the People's Liberation Party-Front of Turkey (THKP/C), a former Turkey-based left-wing group that moved to Syria in the 1990s. Syrian intelligence agency al-Mukhabarat was also implicated in the attack, which was conducted by an operative who brought in explosives from Syria and detailed orders on where and how to stage the attack. Pundits claimed that the Assad regime sought to hit the Syrian opposition inside the borders of their main supporter Turkey, and Reyhanlı, as one of the main concentration centers of opposition groups, was chosen for the attack. It was also claimed that by targeting predominantly Sunni Turkmen and the Arab town of Reyhanlı, the regime sought to ignite ethnic tensions inside Turkey and specifically Hatay, where a significant Alawite population lives.

Three months earlier on February 11, 2013, a bomb-laden vehicle brought in Syria was detonated inside the no man's land between Cilvegözü and Bab al-Hawa border gates, killing 18 people and wounding 24 others.

Later in 2017 and early 2018, the town was targeted by the PKK's Syrian offshoot the People's Protection Units (YPG) terrorist group in mortar and rocket attacks launched from positions in Syria's northwestern Afrin district. One person was killed and several others were injured in the attacks, which also targeted Kilis and Gaziantep provinces bordering Syria. Soon after, Turkey launched Operation Olive Branch, clearing the area of PKK/YPG militants.