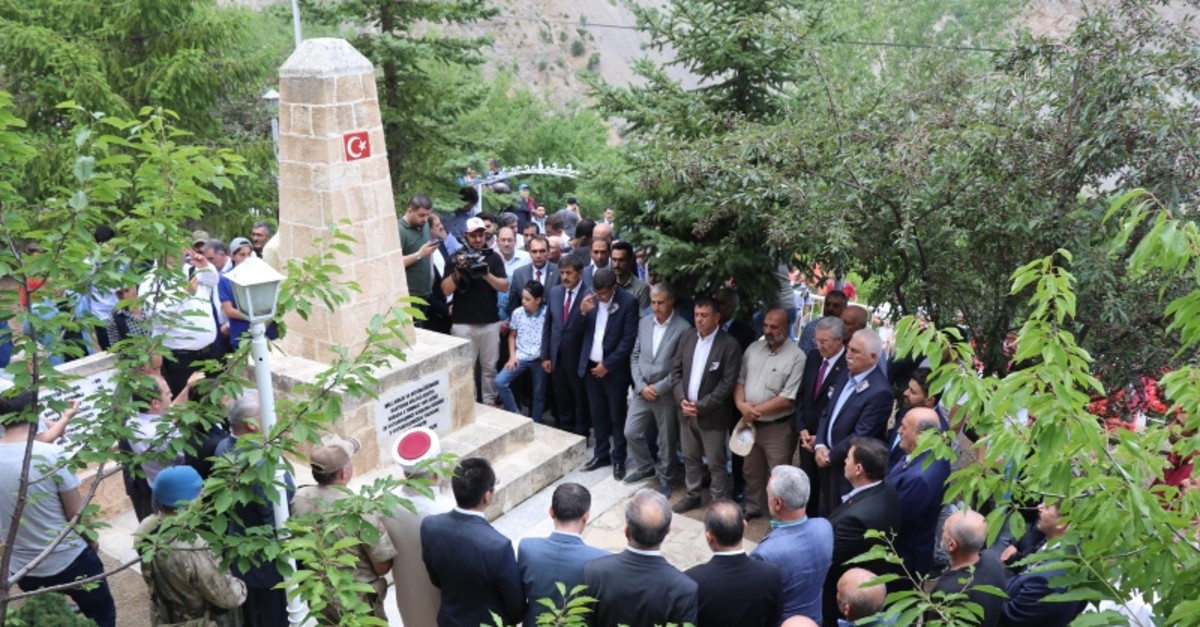 Seeking closure for their grief, the people of Başbağlar, a village where 33 villagers were killed by the terrorist group PKK in 1993, remembered victims on the anniversary of the massacre on Friday.

A massacre in Başbağlar, a small village in the Kemaliye northeastern Turkey's Erzincan province, is viewed as a "response" by the PKK to mob riots in Sivas province that ended with the deaths of 35 people three days before the massacre.

Twenty-eight victims – all of them male residents of the village – were shot execution-style by a group of terrorists who stormed the village. Five others were killed when terrorists set houses, a mosque and a school in the village on fire. The surviving villagers would later testify that the assailants told them at the time that it was "in retaliation" for the deaths in Sivas.

Today, it is viewed as a plot by the "deep state" to pit Sunnis against Alevis. Başbağlar was a Sunni-majority village, while the 35 victims who died in a hotel burned by an angry mob were mostly Alevi intellectuals and artists. The massacre took place in a dark period when suspicious deaths and large-scale attacks by the PKK were commonplace. Both incidents were proceeded by the slaughter of 33 unarmed conscripts in the eastern city of Bingöl by the PKK on May 24, 1993. The suspicious deaths of top military officers would wrap up an eventful year that started with a car bombing that killed investigative journalist Uğur Mumcu and a suspicious car accident that claimed the life of Finance Minister Adnan Kahveci. Turgut Özal, the country's eighth president and the first one with a civilian background, also died of a heart attack in April 1993 with many claiming that he was poisoned. In all incidents, the "deep state," a collection of bureaucrats, mobsters, soldiers and influential people from all walks of life allegedly running a shadowy organization for their own interests, was suspect but it was never proven.

Speaking at the commemoration ceremony, Erzincan Governor Ali Arslantaş said that throughout the Turkish history in Anatolia, all people from different backgrounds have been welcomed in peace and confidence regardless of their religion, language or sectarian beliefs.

"Nevertheless, those traitors have targeted our country's integrity, the unshakable unity and solidarity of our nation, attempted to break our brotherly relations in Madımak and Başbağlar," Arslantaş said.

In the Başbağlar case, 20 people were arrested as part of the investigation; 18 were later released. Only two people were jailed and sentenced to life imprisonment for being members of the PKK. Although the PKK apparently claimed responsibility for the attack, during interrogations, jailed PKK leader Abdullah Öcalan said he had been unaware of the incident. The case was closed in 1998 as "unresolved," a phrase which was quite common in the 1990s where suspicious deaths and murders would be defined so by courts with real perpetrators rarely arrested.

Ali Akarpınar, who escaped the massacre injured, now serves as headman of Başbağlar. Speaking to Anadolu Agency (AA), Akarpınar said their grief was still fresh because of the "legal process" around the massacre. "Nobody paid for what they've done. Unfortunately, the State Security Court, which handled the case in 1998, ruled for non-prosecution after 24 hearings. Houses were burned, people were killed, and our village almost wiped off the map but unfortunately, there is no suspect to blame. We want justice. We want the perpetrators to be found," he said.

Hatice Özdemir, wife of one of the Başbağlar victims said at the ceremony that "for some 26 years, we stood upright and stood up against those who wanted to divide our country," adding that they will never succeed in this regard.

Ruling Justice and Development Party (AK Party) Istanbul Deputy Mustafa Ataş, also recalling the Madımak massacre along with the Başbağlar said, "Before 1980, the forces that massacred the children and youth of this country as right-wing and left-wing, those who wanted to divide and destroy this country could not reach their ambitions," adding that "We know that those who want to destroy this country in different time periods and on different dates have never and will never reach their goals."

"I want to promise once again that we will fight together to capture and uncover the murderers behind the Başbağlar massacre," he said.