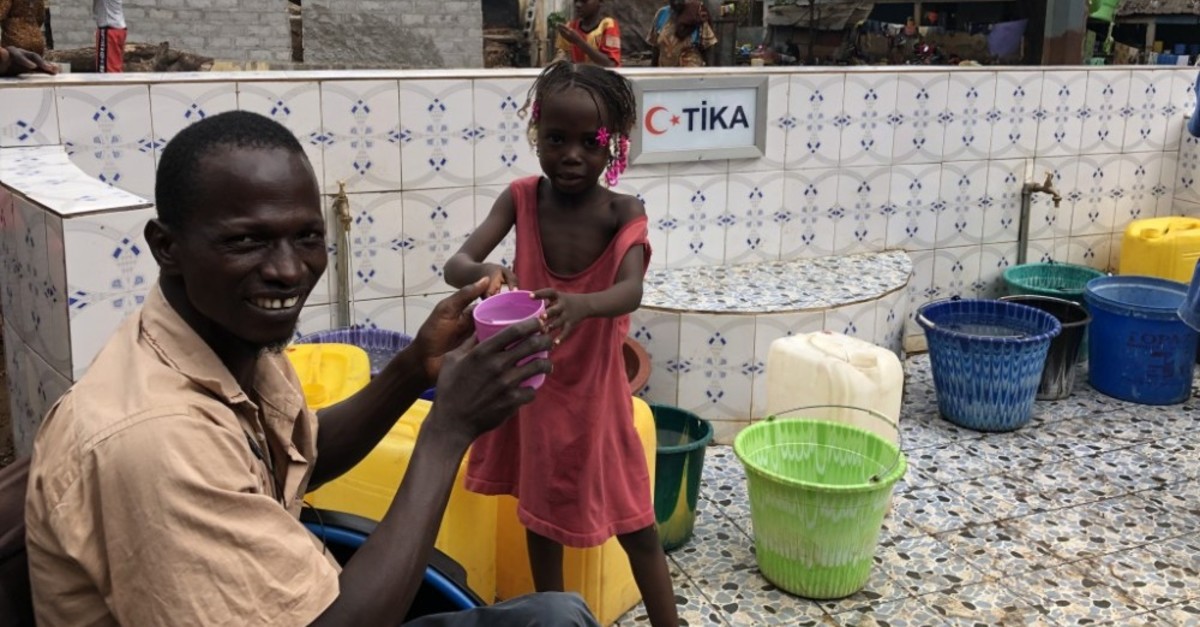 A man helps a girl drink water from a fountain set up by Tu0130KA in Guinea's Conakry where the locals had to walk for kilometers to reach drinkable water.
by Daily Sabah Jul 06, 2019 12:23 am

The Turkish Cooperation and Coordination Agency (TİKA) wrapped up about 800 projects around the world in the first six months of 2019, as the country's leading development aid agency extends outreach in aid, from health and education to vocational training

Active in 59 countries with 61 offices, TİKA has a presence in Central Asia, Africa, the Balkans and South America. Speaking to Anadolu Agency (AA), Kayalar said they were working on projects in more than 170 countries and accomplished their goal of projects for the first half of this year. "Projects help women, children, disadvantaged communities and terror victims," he highlighted.

The agency was founded with the purpose of helping former Soviet republics after the collapse of the Soviet Union and was a little-known state apparatus before it rebranded itself in the past decade as a major source for the country's international clout. It has reached out to more people in need across the globe and developed projects in the rem

ote corners of the world. Last year, it was placed under the supervision of the Culture and Tourism Ministry, further expanding its projects in coordination with other public agencies. Kayalar said since then, they have carried out more than 1,500 projects, such as furnishing and renovating more than 70 hospitals and clinics, around the world. Kayalar says they were also involved in the refurbishment and restoration of more than 200 educational facilities and reached out to more than 10,000 people around the world for education.

Along with aid activities, TİKA is heavily involved in restoration projects, especially the restoration of Ottoman-era structures outside Turkey. Some 20 Ottoman-era buildings are currently being restored by the agency. In terms of Turkic history, TİKA was also behind the construction of a road to Bain Tsokto inscriptions in Mongolia, where the oldest written attestations of the Turkic language family are located on a set of stones erected in the eighth century, and contributed to excavations in the area. It now plans to build a museum at the site.

Kayalar said the Muslim holy fasting month of Ramadan that ended in June was also an opportunity for TİKA to reach out to people in need, and they were active in 75 countries, providing aid to more than 400,000 people.

Among the bigger projects the agency has carried out is the construction of a girls' dormitory at a university in Palestine and a hospital in Kyrgyzstan.

The agency also taps into local human resources with its "experience exchange program" that involves trips for Turkish students to several countries where TİKA is active. Students both get familiar with ongoing projects in those countries and take part in them, delivering aid and helping communities. Kayalar said 500 students will travel to 35 countries for this year's program. Kayalar also said more than 80 completed projects in 30 countries are ready for inauguration, including a restored bridge in the Balkans and restored ancient tombs in Ethiopia. In Niger, the agency will open Niger-Turkish Friendship Hospital and a school. In Serbia, a 1,000-year-old citadel restored by the agency will soon be reopened. In Iraq, a historic bazaar in Kirkuk, which succumbed to a devastating blaze last year, will be reopened in the autumn after restoration work by TİKA.