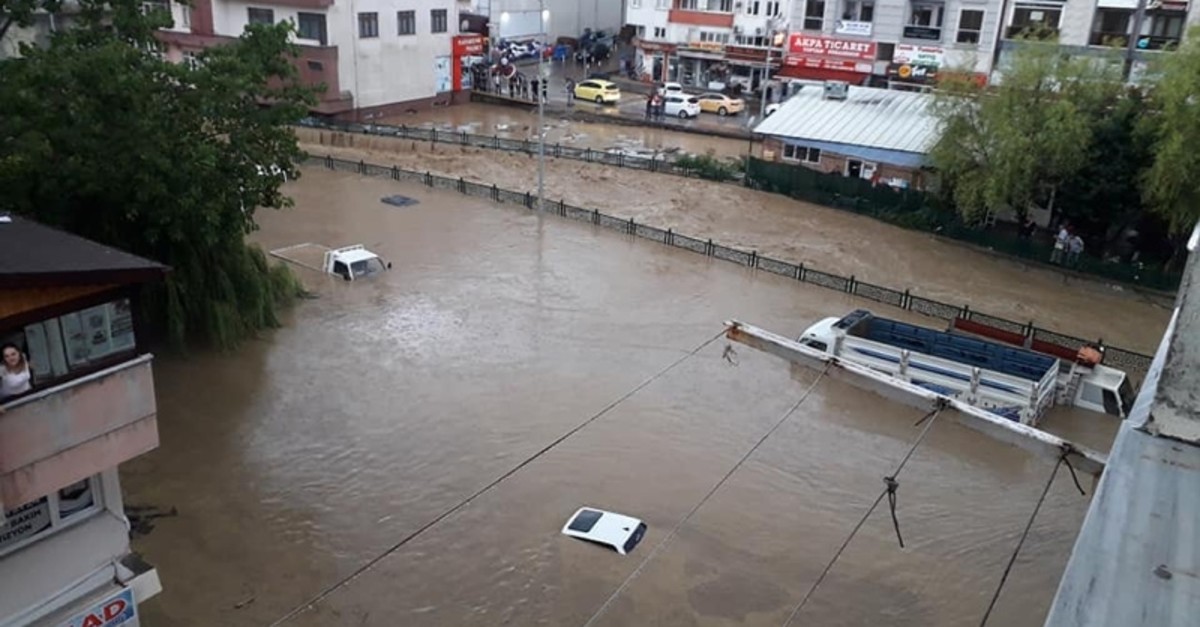 Seven people are missing and 69 people have been rescued from deluges that hit the northwestern province of Düzce on Wednesday night and Thursday.

Düzce Gov. Zülkif Dağlı said seven people went missing in the village of Esmahanım, while 69 stranded residents of Akçakoca and Cumayeri were rescued.

Several people, including a group of eight rafters, were airlifted to safety in Cumayeri district on Thursday after overflowing river waters left them stranded on top of their cars and homes.

A military helicopter airlifted eight adults from a rafting facility on the Melen River. Two of the rescued people had fractures in their bodies, while the others survived the floods without injury.

"It was a moment when a human faces death," Davut Pirdal, operator of the rafting facility, told Anadolu Agency.

Pirdal added that the helicopter could only reach them at around 8 a.m. (0500 GMT) on Thursday.

The flood completely destroyed the facility, he said, adding that over 10 cattle were drowned in the disaster.

Isa Keleş, Anadolu Agency's Cumayeri correspondent who went to the scene to cover the incident, was also among the people rescued from the area.

Keleş said that they first took shelter under a roof, but later they had to climb to the top of the roof as the water level kept increasing.

Meanwhile, 21 people working at hazelnut farms in Dilaver village were rescued from the roof of their homes after the first floor flooded with rainwater.

Gov. Dağlı told Anadolu Agency that the workers coming from southeastern provinces to work at the farmlands were also rescued by a helicopter.

Hasan Ani, one of the workers coming from Şırnak province, said that they were stranded since last night, but they are fine now.

Also in Akçakoca district, heavy rainfall caused stream flooding, which made it impossible for people residing in villages to reach the city center.

The villagers are being evacuated to the city center by helicopters, according to Hakan Öztaş, deputy mayor of Akçakoca.

Öztaş said that there is no casualty due to the disaster.

"Rain has slowed down now. [...] Some vehicles are dragged to the sea," he said.

Due to the strong downpour in neighboring Sakarya province, the Kocaali-Akçakoca road was closed to transportation.

Firefighters were immediately dispatched to the scenes but had difficulty reaching the villages of Dokuzdeğirme, Yeşiltepe, Çelikdere, Harmankaya and Büyük Melen as debris brought by the floods and two landslides triggered by heavy rain blocked the roads.

The Disaster and Emergency Management Presidency (AFAD) and gendarmerie units were also called in to help with the rescue efforts.

Some villagers still remain stranded in their houses, surrounded by rushing water, as they wait for emergency teams to arrive. Road clearing operations are ongoing.

Forecasters have issued further flood and landslide warnings for parts of Düzce.