Contact made with pirates holding 10 Turkish sailors off Nigeria 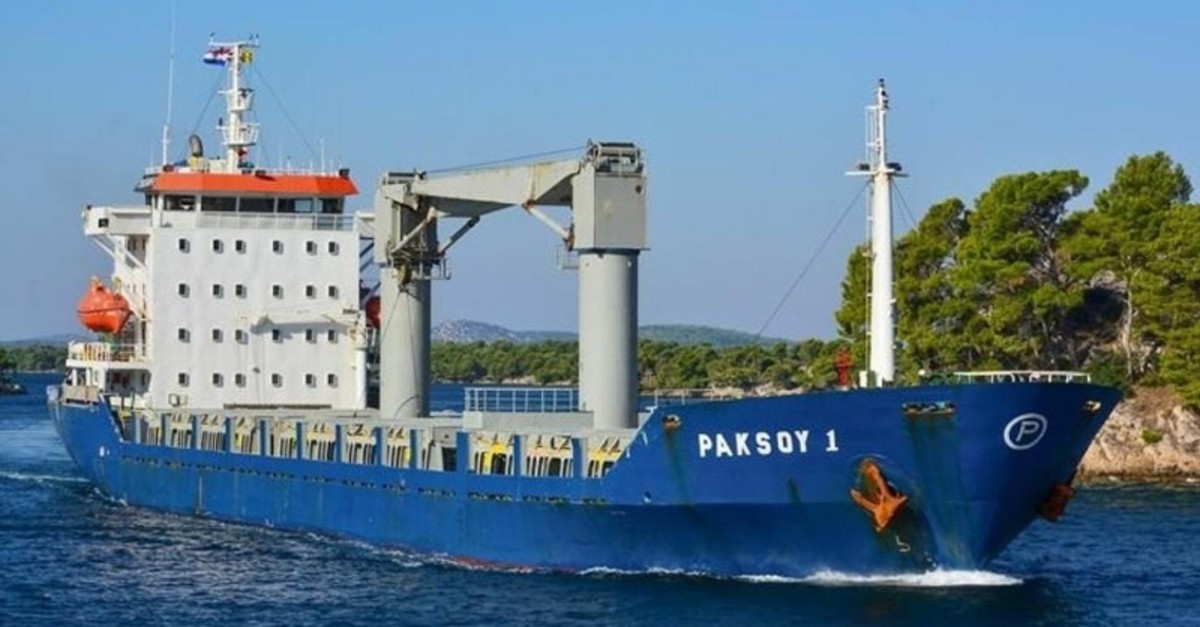 After a week of efforts and nervous waiting, contact was reportedly established with the pirates who kidnapped 10 Turkish sailors off Nigeria, as four others remain in the hands of ransom-seeking criminals in the country.

On July 16, 10 Turkish sailors were abducted in the Gulf of Guinea when pirates attacked Turkish-flagged ship Paksoy-1 bound to Abidjan in Ivory Coast from Douala in Cameroon. Out of the ship's 18 crew members, eight were left on the ship, which was docked in the port of Tema in Ghana.

The first contact was established in the beginning of the week with the group of pirates through the efforts of the ship's operator Kadıoğlu Maritime and Ankara's support, Turkish daily Habertürk reported Tuesday citing unnamed sources, who said that the pirates likely prolonged the contact process to keep the amount of ransom high and the bargaining margin wide.

The Turkish government is closely following the issue and is in frequent touch with the company, the report said, adding that the release of the sailors could happen soon since establishing contact was an important step.

Meanwhile, an armed gang which kidnapped four Turkish nationals in western Nigeria's Kwara state on Friday is demanding $44,000 in ransom, a local landowner speaking to the Nigerian press outlets said.

The Nigerian police had earlier confirmed the kidnapping of Seyit Keklik (25), Yasin Çolak (33), Ergun Yurdakul (35), and Şener Apal (40), who are reportedly workers in a nearby quarry. They were reportedly kidnapped in Gbale village at the Edu Local Council where they had gone to buy drinks.

The gang established contact with their employers and demanded 4 million Nigerian nairas ($11,000) in ransom for each of the workers, Lafiagi community leader and landowner Abdulrahaman Manzuman said.

"I heard that the kidnappers have contacted the company, demanding for N4 million per head. I cannot say much on it because I am not in town currently," Manzuman was quoted as saying by Nigerian news website Vanguard. He also said that they were disturbed by the incident since it puts the local community in bad light.

Kwara is one of the safest states in Nigeria and Saturday's kidnapping was deemed a one-off event in the relatively peaceful state.

Ajayi Okasanmi, police spokesman in Kwara state, earlier told Turkey's official Anadolu Agency (AA) by phone that a rescue operation was underway. In an interview with the Vanguard, Okasanmi denied having any knowledge of ransom demands and advised families not to pay any money for a possible release.

Both Manzuman and Okasanmi were quoted as saying that the gang members were dressed as Fulani herdsmen, a major ethnic group living in western parts of Africa's Sahel region also encompassing central and northern Nigeria. Along with the country's largest ethnic group, the Hausa, they are commonly referred to as the Hausa-Fulani ethnic group predominant in northern Nigeria and making up some one-third of the population, with most adhering to Islam. Having both Muslim and Christian communities, the Yoruba people of the southwest make up one-fourth of the population while predominantly-Christian Igbo people of the southeast make up 15%.

These groups have historically been vying for influence in the region, and since Nigeria became independent in 1960, there is constant struggle for power to control Africa's most populous country and biggest economy apparent in the North-South divide. The bloodiest chapter of this struggle was the Nigerian Civil War, also known as the Biafran War, in which millions were killed, displaced and suffered from famine between 1967 and 1970, when southeastern peoples led by Igbo declared a secessionist state encompassing the Niger River Delta called Biafra and tried to secede from Nigeria.

Despite Nigeria being Africa's largest oil producer with most fields and production sites located in the delta emptying into the Gulf of Guinea, the region still suffers from extreme poverty and occasional militant activity. The Gulf of Guinea was described by the International Maritime Bureau as the most dangerous area in the world for piracy where 73% of all sea kidnappings and 92% of hostage-takings have taken place.

Across the border in predominantly-French speaking Cameroon's English-speaking southwest region, also on the coast of the gulf, a conflict running between secessionists calling for an independent state of Ambazonia and the government reached a peak in the last two years, almost to a prelude to a civil war.

To the north, the Sahel region has been increasingly witnessing violent clashes between predominantly-Muslim herder and predominantly-Christian farmer communities over the last decade due to changes in land use pushed by environmental issues and desertification, fast population growth and limited resources. In Nigeria alone, nearly 4,000 people were killed in farmer-herder clashes in the last three years.

The conflict mainly affecting Mali, Niger, Burkina Faso, Benin, Chad and Cameroon also caused side conflicts such as proliferation of civilian communities, an overall increase in crime rates and the emergence of extremist terrorism through al-Qaida and Daesh affiliates such as Boko Haram, which mainly operates in the Borno state in the country's northeast corner. More than 17,000 people are estimated to have been killed by Boko Haram since it launched armed attacks in 2009.

The collapse of state authority and ongoing clashes in Libya since longtime dictator Muammar Gadhafi's toppling in 2011 is one of the most important reasons fueling the conflict in Sahel as it facilitates human trafficking and smuggling, two main sources of income for armed gangs and terrorist groups operating in the region, while giving them unhindered access to arms.

These ongoing conflicts also fostered a spike in violence and kidnappings in Nigeria. In the last week alone, 72 people were killed in various violent incidents while 32 people, including 14 Turkish nationals, were kidnapped, according to the data compiled by Ihlas News Agency (IHA). However, no ethnic, religious or political motive was voiced in either incident related to the Turkish nationals and the overall stance toward Turks in the country is regarded as positive and welcoming.

According to an AA report citing police data, kidnappings for ransom between 2008 and 2010 stood at 887. This number increased to over 2,000 for 2014-2017 period and included bureaucrats, politicians, businesspeople, clergymen and students. In the Niger Delta alone, 200 foreign workers were targeted and kidnapped between 2007 and 2017 by armed gangs or militant groups.

Usman Nagogo, the spokesperson for the police in northwestern Zamfara state, told reporters during a press conference Tuesday that more than 200 people kidnapped by armed gangs have been rescued in the last three weeks in joint operations conducted with the military.

Many gang members, firearms and ammunition were seized during the operations, Nagogo said, adding that the government is conducting talks with gangs and started having positive results to boost security.

As heard by the entire world in 2014 through the kidnapping of 270 female students held for months, Boko Haram mainly kidnaps youngsters and women either for recruitment or forced use for the terrorists.

Income inequality and extreme poverty also cause various problems in Nigeria, including lack of access to education as 10 million children out of a population of 190 million do not attend to school, making them vulnerable to recruitment or manipulation by criminal groups.