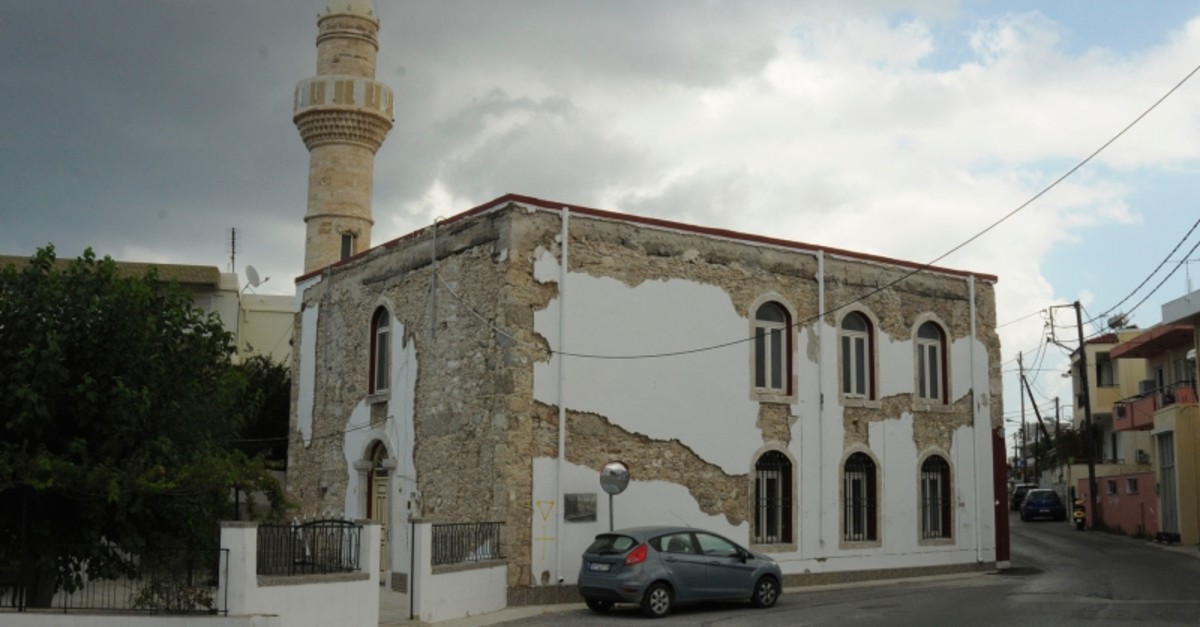 A Turkish cultural association said Monday that almost all mosques and graveyards on Greece's Aegean island of Kos (Istanköy) were "in ruins" and closed to worship.

The Rhodes, Kos and the Dodecanese Turks Culture and Solidarity Association urged Greece to respect the freedom of religion of the Kos Turkish community prior to the Islamic festival of Qurban Bayram (Feast of the Sacrifice), also known as Eid-al Adha.

The organization's president, Mustafa Kaymakçı, said in a written statement that the Algerian Gazi Hasan Pasha (Lonca) Mosque has yet to be repaired following a 6.6 magnitude earthquake in 2017 that damaged the structure.

The mosque is located in the village of Platani (Germe - Kermentes) near the Kos town center, which is home to a nearly 2,000-strong Muslim Turkish community.

Kaymakçı said that shops under the mosque -- which were owned by the Kos Muslim Foundation Properties Management -- were also damaged.

He underlined that another mosque in Platani village on the island was damaged due to the earthquake, which left two dead and dozens of others injured at the time. However, the restoration of the mosque was not permitted with local Muslims forced to use its courtyard for their daily prayers.

"Masjids, tombs and graveyards of Kos are neglected and almost all are ruined," he stressed.

Kaymakçı said that places for worship and other pious endowments on Kos are normally run by the Kos Muslim Foundation Properties Management.

Muslim pious endowments in the Western Thrace region of Greece as well as Rhodes and Kos are part of the heritage of the Ottoman era, and are today administered by people appointed by Athens.

Kaymakçı said that 34 decares of land on Kos belonging to a Muslim foundation were recently sold to a tourism company well below its real price.

Similarly, more than 70 parcels -- also Muslim foundation properties -- had previously been sold to municipalities, he said.

Kaymakçı added that the properties of a Muslim foundation in Rhodes Island were also sold in the same way.

"We request Greece end assimilation policies which have been applied to Turks on the islands and to respect the freedom of religion and worship of the Kos Turk society prior to the Feast of Sacrifice," he said.

Located only 5 kilometers (3 miles) south of the Turkish mainland at its closest point, Kos was ruled by the Ottoman Empire between 1523 and 1911, when it was occupied by the Kingdom of Italy along with other islands of the Dodecanese including Rhodes. Predominantly Greek-inhabited islands were handed to Greece in 1947 following World War II.

The islands were spared from the 1923 population exchange affecting the Greek-Christian community living in Turkey and the Turkish-Muslim community living in Greece, with the Western Thrace region of Greece and Istanbul, Bozcaada and Gökçeada in Turkey being the exemptions. Currently, Rhodes and Kos islands are home to a 6,000-strong Muslim-Turkish minority, but this number is only a fraction of their population before 1911, since most of them chose to migrate to the Ottoman Empire, and then to Turkey in later years.

Founded by Turks who migrated from Rhodes and Kos to Turkey, the Rhodes, Kos and the Dodecanese Turks Culture and Solidarity Association is based in the western province of Izmir on the Turkish Aegean coast.