Charitable Muslims reach out to Syrian refugees with food aid 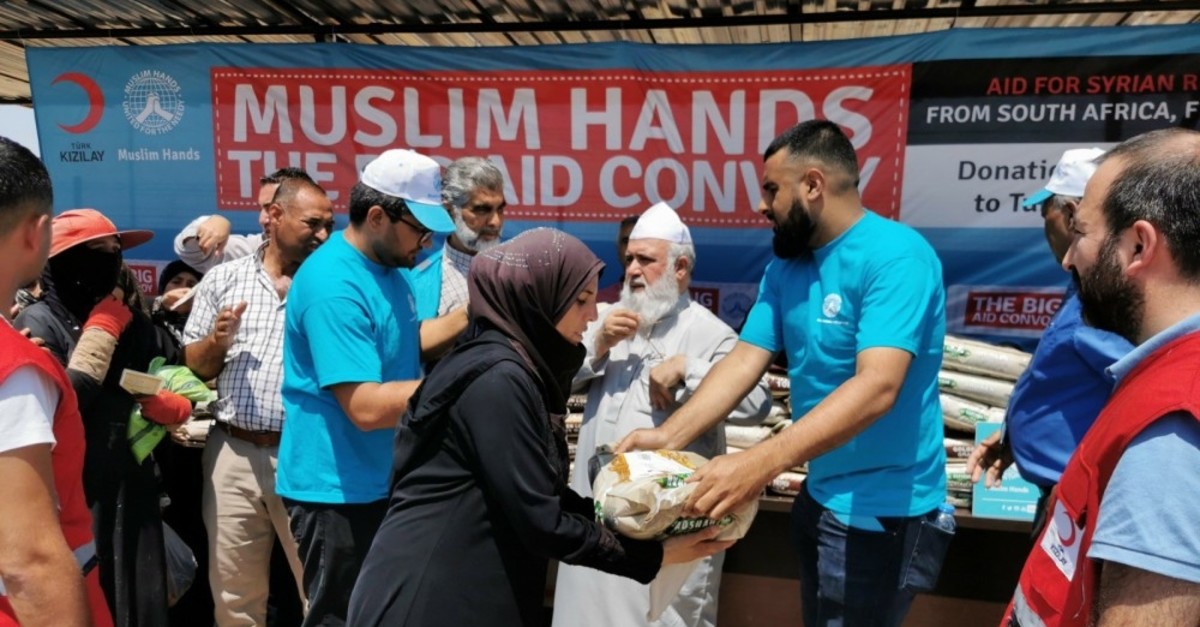 Muslim Hands, a U.K.-based charity set up by the country's Muslim community, delivered 81 truckloads of rice to Syrian refugees in Turkey and the internally displaced in war-torn Syria

London-based Muslim Hands, an international nonprofit organization founded by the Muslim community in the U.K., delivered 81 trucks full of rice to Syrian refugees and displaced Syrians.

Charity officials handed the aid, worth $1.7 million, to Turkey's Disaster and Emergency Management Authority (AFAD) and Turkish Red Crescent in Hatay, a southern province on the border with Syria, yesterday.

The Turkish Red Crescent will gradually deliver 31 trucks of aid to refugees living in camps inside Turkey. The rest will be delivered by AFAD to the displaced Syrians who took shelter in Idlib.

Idlib is the flash point city at the heart of constant attacks by regime forces in war-torn Syria.

The Red Crescent will deliver the rice among Syrians living in refugee camps in southeastern Turkey's Hatay and other provinces, including Osmaniye, Adana, Kahramanmaraş, Kilis and Gaziantep.

Muslim Hands Chairman Syed Lakhte Hassan said the campaign for aid was organized by Pakistani Muslims in the U.K., France and South Africa and they gathered a large amount of donations within a short time. He said they'd continue supplying aid to Syrians.

Turkish Red Crescent official Uğur Mahmut said they started delivering the rice to refugees and a total of 244 tons of rice would be handed to Turkey's Syrian guests. Muslim Hands last year delivered rice, flour and canned food worth 1.5 million pounds to Syrian refugees in Turkey.

Since 2011, Turkey has received a constant flow of displaced Syrians, fleeing the conflict, and their numbers have expanded from mere thousands to millions.

The conflict in Syria that started in 2011 has killed hundreds of thousands of people and forced more than 5 million people to flee, while more than 7 million are internally displaced. Refugees mainly took shelter in Turkey, Jordan and Lebanon, with Turkey hosting the largest number of refugees.

AFAD has led the efforts to shelter refugees. At some 15 accommodation centers, including tent camps and modern prefabricated housing units, AFAD hosts 174,256 Syrian refugees. The rest either live in houses they rented or bought or in homes provided by charities in Turkey's 81 provinces.

Ankara has often criticized the international community for not providing sufficient humanitarian aid for the refugees in Turkey and not taking in more refugees.

The World Food Programme (WFP) has warned that the eight years of prolonged conflict in Syria has taken its toll on the humanitarian situation there and the number of people in need of humanitarian assistance has risen to nearly 12 million people, while 6.5 million among them are "acutely food insecure." It says almost 80% of households across the country are struggling to cope with the lack of food or money to buy it.