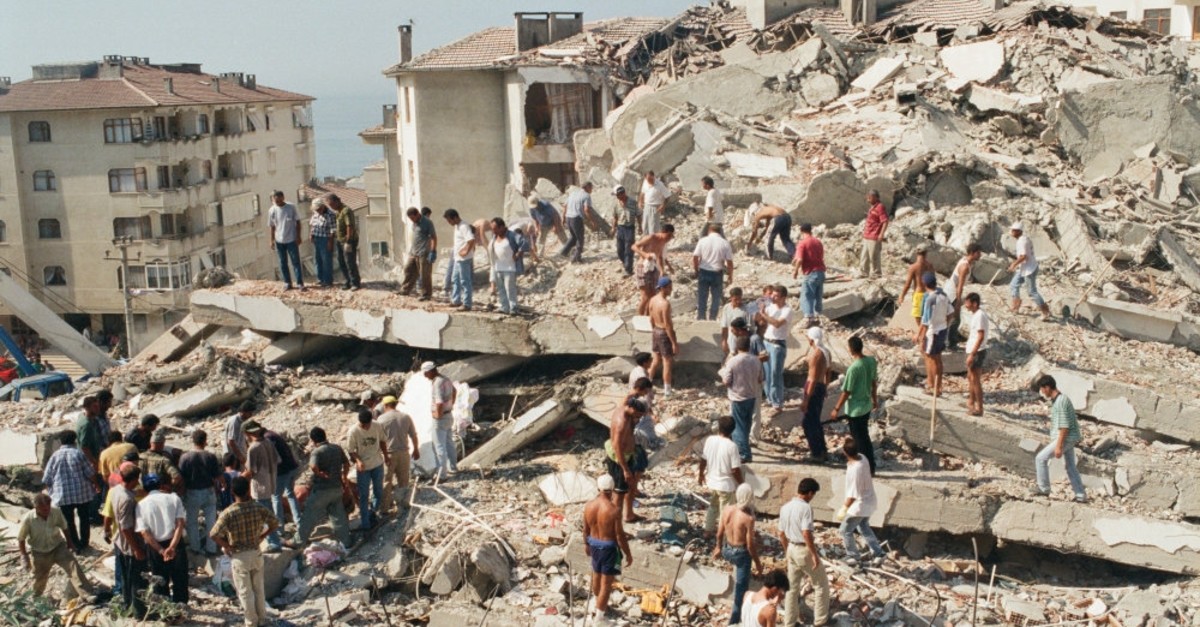 Turkey will mark tomorrow; the 20th anniversary of the 1999 earthquake that devastated northwestern cities the ‘big one,' which killed thousands, is still vivid in memories as smaller tremors continue threatening the country

It has been 20 years since a 7.4 magnitude earthquake rocked the Marmara region on Aug. 17. More than 18,000 people were killed in the cities of Kocaeli, Istanbul, Bursa, Sakarya and Yalova when the notorious North Anatolian Fault Line cracked and triggered the deadliest disaster since 1939. Commemoration ceremonies will be held tomorrow in Gölcük, the town at the epicenter of the 1999 earthquake and other places heavily affected by the disaster. Yet, the public hardly forgets the fact that the country still sits on active fault lines, while experts warn about "a big one" set to hit Istanbul, the country's most populated city, in the near future. An earthquake of 6.0 magnitude that hit Denizli, a western province, on Aug. 8, prompted concerns again about fault lines crisscrossing the country's western regions.

It was also a showcase for a quicker disaster response as disaster agencies and nonprofit organizations rapidly mobilized to reach the area, where no casualties were reported although hundreds of buildings remain damaged, forcing residents to live in tents provided by the Red Crescent.

Forty-five seconds of the earthquake at a depth of 17 kilometers preceded a 7.2-magnitude tremor in November 1999 that killed 845 people in Düzce, a province near Sakarya. Two major earthquakes paved the way for a massive overhaul to Turkey's disaster response and measures against earthquakes. To this day, Turkey still strives to keep risky areas safe against earthquakes with varying degrees of success. "Learn to live with earthquakes" was the motto of public campaigns following the 1999 disaster that taught millions of citizens how to act in case of a tremor, safer evacuation methods, etc.

Nowadays, the country plans to expand awareness efforts with assistance from Japan, another quake-prone country more experienced than Turkey in measures against quake damage.

The Disaster and Emergency Management Presidency (AFAD), founded about one decade after the earthquake to ensure better responses to earthquakes and other large-scale disasters, spearheads the efforts to teach the public how to be prepared against the quakes. AFAD's Earthquake Simulation Center in the capital city of Ankara particularly caters to students in an effort to prepare younger generations against the disasters. Thousands of students are hosted at the center, where they experience an earthquake first-hand and are taught what to do in case of an earthquake.

Turkey also introduced Compulsory Earthquake Insurance commonly known as DASK [after the Natural Disasters Insurance Agency] following the 1999 disaster and today, 52% of houses have insurance that has paid TL 190 million to people who have suffered due to earthquake damage since its inception in 2000. The insurance was key in reducing compensation paid by the state and revived the economy affected by the disaster. Indeed, the economic cost of the 1999 disaster was between $12 billion and $20 billion, and it is viewed among the causes of the economic crisis in 2001.

Still, experts warn that old buildings can be damaged in a more severe earthquake. Professor Naci Çağlar from the Applied Sciences University in Sakarya, says buildings constructed before 1997 bear the risk of collapse in a likely earthquake. New regulations issued by the government that year mandated builders to use construction materials more resistant to tremors. Speaking to İhlas News Agency (IHA), Çağlar said about 5% of buildings constructed before 1997 were either damaged or collapsed while the rest that survived the powerful tremors had the same features as those that collapsed in 1999. "It is obvious a new earthquake will be devastating for those buildings built on a softer ground. They should be inspected immediately," he cautioned. A total of 365,000 buildings were damaged in the 1999 earthquake and more than 112,000 of them either collapsed or became uninhabitable due to heavy damage. "Current regulations on earthquake measures are exemplary in the world, and it is safe to say that buildings are safe against substantial damage caused by disasters," he noted.

The government launched an urban transformation campaign in 2012 to demolish buildings under risk. Buildings not built to earthquake safety standards and delayed response in the aftermath led to the high rate of casualties in the 1999 earthquake. The earthquake razed poorly constructed buildings to the ground and emergency personnel struggled to cope with the scope of the disaster. Turkey has also implemented regulations for mandatory reinforcement of undamaged buildings against earthquakes.

Professor Şerif Barış, an expert in geophysics engineering from Kocaeli University, says the city earned "an incredible experience" following the 1999 disaster and Turkey needs to convey this experience to the world, to help other countries prone to earthquakes. Speaking to Anadolu Agency (AA), Barış said that Kocaeli's speedy recovery thanks to public unity was exemplary in the world. The professor says Turkey lies on the world's most active fault line and saw 327 major earthquakes in the last 2,000 years, including 38 that wreaked havoc in Istanbul and the greater Marmara region. Barış has been working on methods for earthquake forecasting since the 1980s and is involved in research with Japanese academics to determine the earthquake before they happen.

Still, he acknowledged that it was very difficult to determine the time, and this was why Turkey should focus on work to reduce the damage it would cause. An early warning system he currently operates and coordinates with AFAD may be helpful, he said. The system, which is being installed in Bursa and Yalova, involves automatic shutdown to power and gas grids before the possible earthquake and designation of heavily damaged areas faster, to help search and rescue crews prioritize them.

In Istanbul, researchers monitor the Marmara Sea for the movement of tectonic plates and record moment-by-moment data about movements that are viewed as precursors to what might likely be a strong earthquake. Istanbul Technical University (İTÜ) leads the study, which is supported by the Turkish government and France. Professor Ziyadin Çakır, who heads İTÜ's Geology Engineering Department, said they used sensitive devices to monitor the movements beneath the sea and saw an increase in tensions on the fault line daily. "The Eurasia and Anatolia plates on both sides of the fault line move in opposite directions without intervals and increase the tension.

This contributes to the severity of a possible earthquake," he warned. On a positive note, he says that multiple fault sections in the Marmara Sea also mean advance of the earthquake from its epicenter to other areas. "There is a low probability that all those sections will crack simultaneously in one earthquake. I don't think that the magnitude of a future, major earthquake will be higher than 7.3," he said.