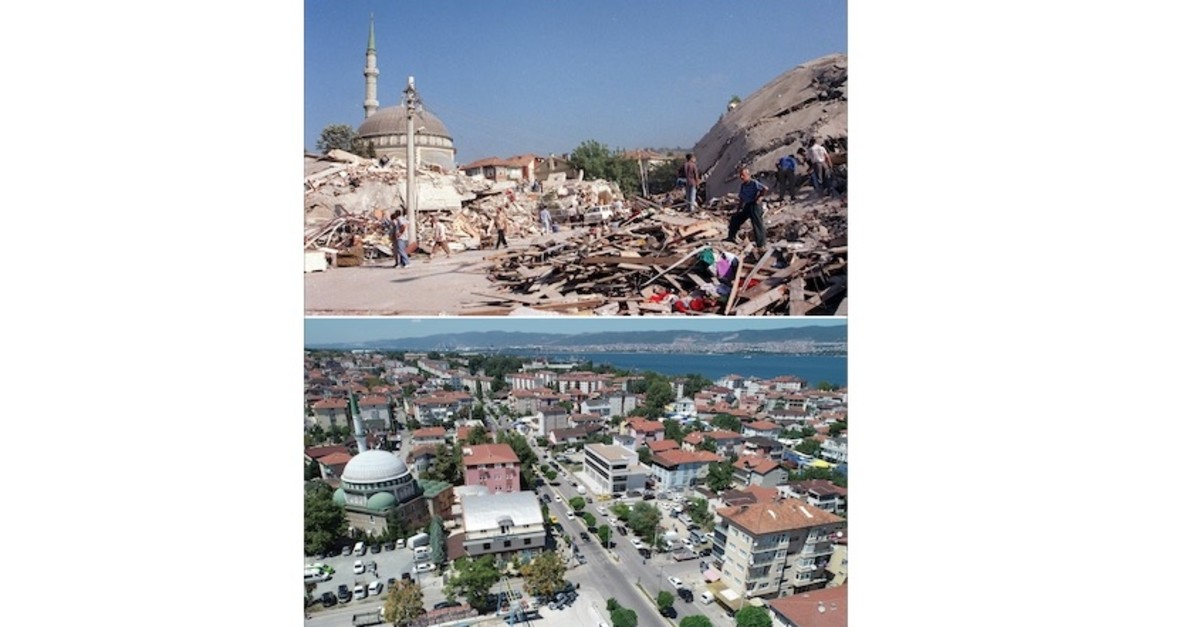 Gölcük, an industrial town that was at the epicenter of the 1999 Marmara earthquake which killed thousands, is hardly the wrecked town it once was, although the disaster still haunts those who lost loved ones, 20 years later

Life came to a standstill after a fateful 45 seconds on Aug. 17, 1999, when a 7.4-magnitude earthquake shook Gölcük, a small industrial town east of Istanbul. The town at the epicenter of the disaster that killed more than 18,000 people across the Marmara region no longer resembles the ghost town it was in 1999, and there are no traces of the earthquake's impact, save for the lingering trauma of those who lost loved ones or were injured in the disaster. Gölcük, home of the Turkish Navy and several factories, regained its economic and population growth over 20 years. The earthquake claimed 5,383 lives in the town, and more than 5,200 others were injured. Thousands of houses and shops were either destroyed or heavily damaged, while the infrastructure was almost wiped out by the powerful tremors.

Once a favorite destination for migrants from other cities for its thriving industries, it turned into a place residents sought to flee after the earthquake. Its population drastically dropped to 55,000 from 80,000 within one year following the earthquake. Today, it is a popular town again thanks to recovery efforts by the municipality, and its population has reached 163,500.

Town Mayor Ali Yıldırım Sezer credits this new growth to economic efforts as well as the beautification of the town to make it attractive for the population again. Speaking to Anadolu Agency (AA) ahead of the anniversary of the earthquake, Sezer said the disaster was a turning point both for the town and Turkey in terms of awareness of such large-scale disasters and people truly learned what such a disaster entails after the 1999 earthquake.

The town saw a rapid recovery for buildings. Heavily damaged buildings were demolished, while new residences were constructed for the displaced soon after the quake. A set of new regulations implemented following the earthquake secured the future of Gölcük in case of another earthquake, and the state was quick to implement its ambitious urban transformation project that involves replacing old buildings with new. New buildings are still being constructed 20 years after the disaster.

Sezer says Gölcük managed to keep its image as an industrial town as factories reopened and the navy is still based there. "We have a Ford Otosan plant, one of the biggest vehicle exporters of Turkey, and factories manufacturing products for the automotive industry. Gölcük is now an important automotive hub in Turkey. You wouldn't know now that this town was hit by a big earthquake," he said. The mayor points out that though they wanted the residents to be fully aware of risk of a future earthquake and increase their preparedness, they did not want "sights that traumatize them and remind them of the 1999 earthquake." Still, an exhibition gallery will be built inside a museum in an enormous new park under construction to ensure that the memories of earthquake are preserved, and people remember it.

The mayor lost his uncle and aunt as well as their spouses and children in the earthquake, and the house he moved into after he married collapsed. "It was a very painful time, a time when we'd stay up for hours and would bury our loved ones under the light of cars' headlights. Still, neither me nor many people I knew thought about leaving Gölcük. Today, Gölcük rose from its ashes and looks to the future with hope," he says.

Serdar Güneş also agrees with keeping the memory of the disaster fresh. Güneş, a teacher, was in Kocaeli when his house collapsed in the earthquake. He and his wife were pulled out alive from the rubble, where they were stuck between a narrow space between their bed and the closet for four hours.

His experience in setting up tents and tracking in nature got him recruited by a crisis desk set up by the Kocaeli governorate following the earthquake. With a team of eight, he set up some 500 tents and delivered aid to survivors. Since then, Güneş has dedicated his life to volunteering for search and rescue missions, and nowadays teaches his students how to act during an earthquake and disaster preparedness. He is also a member of a 24-member search-and-rescue team in the northern city of Zonguldak. Güneş told AA that he never forgot what happened to him and his wife and has worked hard to make people more aware of earthquake preparedness. "People don't know what to do when an earthquake happens, but training can change everything. Education for preparedness starts at home, and parents are vital for conveying what they know to their children," he says.

'I can do something to cling to life'

Nuran Zaim, a Gölcük native, lost her husband in the 1999 disaster and survived with her two children. Years later, she finds strength to forget her suffering by helping people as the muhtar [headman] of her neighborhood. The 48-year-old woman was married to Rasim Zaim for eight years when the earthquake struck Gölcük's Değirmendere area, one of the places most affected from the disaster. She and her children were pulled out alive from the rubble after two-and-a-half hours. Her husband Rasim was set to go to the opening of a night club on Kavaklı coast of Gölcük before the earthquake but she later found out that he and his friends changed their plans and was in a building collapsed into the sea when the disaster struck. He was among 28 people killed in the collapsed building and it took crews nine days to find his corpse in the sea. She never forgot his death but Zaim says she had to "cling to life for children." "They are my only reason to keep the will to live," she told Demirören News Agency (DHA) as she looked at her husband's wristwatch, something she never removed from her wrist in the past 20 years. "I told myself that I was strong, I can do something to cling to life. In the end, I decided to apply for the muhtar election and won," she says. Zaim is now in her third term as muhtar and says helping people alleviates her suffering. Still, at every anniversary, the pain comes back. "It is like I am living that day again," Zaim, who says she can't stand entering any building on that day for fear of "having those moments again," referring to the 45 seconds that killed thousands of people.

Mehmet Aktürk was a conscript in the capital Ankara when the earthquake struck Sakarya, the neighboring province of Kocaeli where Gölcük is located. A military helicopter took him to Erenler, a district of Sakarya where his family lived, on Aug. 17, 1999. "I'd heard there was an earthquake, and my parents' phone was not working when I called them. I panicked. My commander called me then and said a helicopter would go to Sakarya to help the rescue efforts and I could go with them. Everywhere was in ruins when the helicopter hovered over Erenler," he said, recounting the morning after the quake.

"I saw from afar that my house had collapsed. I approached and suddenly, people started surrounding me. I felt something bad had happened to my family, and I passed out when my relatives told me what happened," he said. Aktürk's mother, sister and grandparents died in the earthquake, and his father was the only survivor. "I can't describe how I felt when I saw the house's roof on the ground. It was like the entire world had collapsed. He says he still feels grief after all those years. "I buried the pain deep in my heart, but I still feel sad. Having my father alive was the only solace, and this has helped me to forget the pain a little," he said. In his 40s now, Aktürk says it was only aging that matured him and made him "accustomed" to the trauma he lived through.