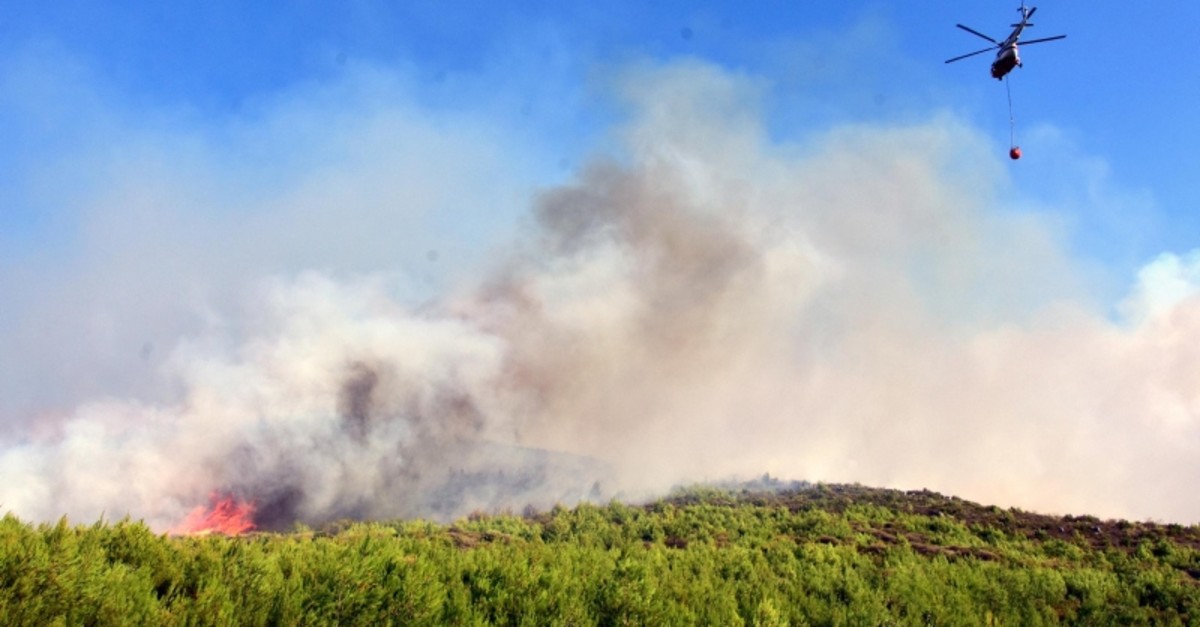 Fire crews are working to douse wildfires that have broken out in the Milas and Bodrum districts of southwestern Muğla province and in the Karabağlar district of western Izmir.

In Muğla, 13 helicopters and dozens of firetrucks are intensively working to put out wildfires in forested areas, Muğla Forest Regional Deputy Director Enver Demirci told Anadolu Agency on Sunday. Locals have also joined in to aid efforts to put out the blazes.

However, strong winds are quickly spreading the fires toward residential areas, Demirci said.

At least one house near a forested area in the Mumcular neighborhood of Bodrum was evacuated.

Another wildfire that started near the Akgedik Dam in Muğla spread to an olive grove but was eventually put out.

In Izmir, fire crews continue efforts to put out blazes near the Kavacık and Tırazlı neighborhoods in Karabağlar. One village has been evacuated.

The large fires have sparked concern among residents, Kavacık neighborhood headman Mustafa Öztürk said. He said the fire is very large, burning in a dense area of pine trees.

Tırazlı neighborhood headman Ali Bahri Özdemir also said the fire has spread to a wide area. He said many teams are working to douse the blaze, but it does not seem to be easily controlled.

Agriculture and Forestry Minister Bekir Pakdemirli told reporters Sunday evening that a total of 23 helicopters, 250 water tankers, 35 bulldozers and 1,000 personnel were working to put out the fires.

Pakdemirli said the Karabağlar fires are the most critical, having burned more than 100 hectares of forestland so far, adding that the ministry is coordinating with local officials on firefighting efforts.

The growth of forest fires depends on wind, heat and humidity conditions, he said, adding that aircraft have difficulty intervening in windy weather.

Pakdemirli noted that the main focus at the moment is cooling the fires rather than determining their cause.

No casualties have been reported yet.