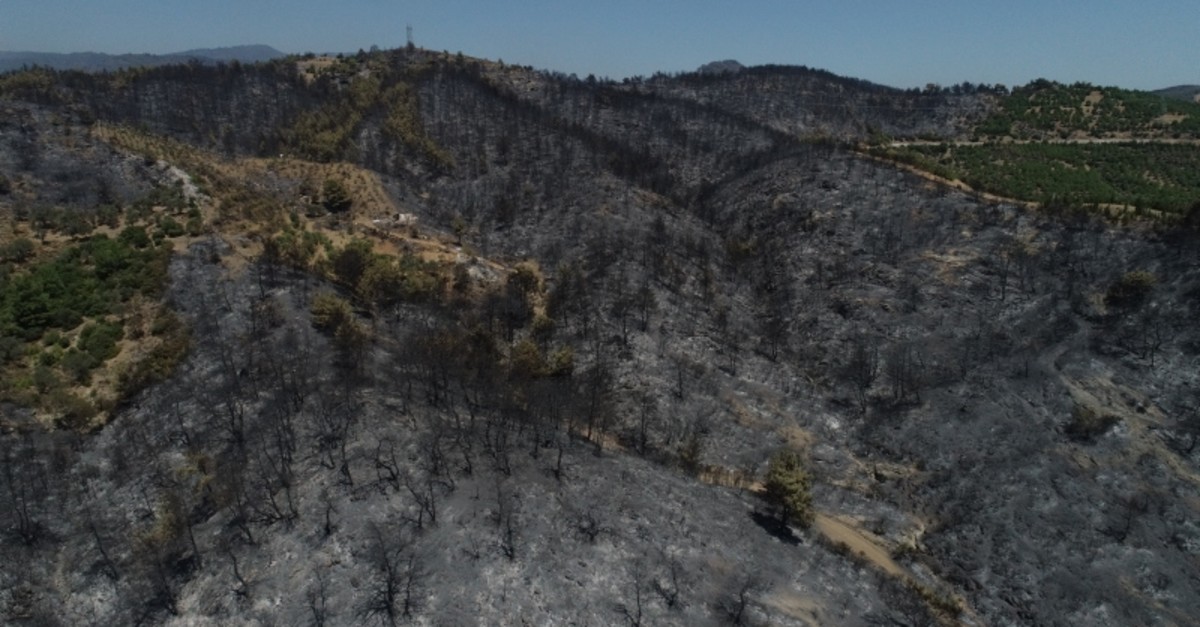 A huge forest fire affecting more than 500 hectares of land in Karabağlar, Menderes and Seferihisar districts of Turkey's western Izmir province is now under control and will soon be fully extinguished, Agriculture and Foresty Minister Bekir Pakdemirli said Tuesday.

Pakdemirli said it took two days and five hours of efforts to bring the fire under control. "There could be flares from time to time but as of this hour, extinguishing efforts are nearing an end. From now on, the field will be cooled off and other actions will follow."

The minister said issuing construction permits for the areas affected by the fire was out of the question, saying forests were under the protection of Article 169 of the Constitution, which also stipulates reforestation for burned down areas.

Pakdemirli said there was an ongoing project to be included in the Guinness World Records by planting three million saplings in Izmir, Muğla and Fethiye at the same time on November 11 at 11:00 p.m.

Firefighter crews, 20 helicopters and 200 fire trucks throughout Turkey participated in efforts to extinguish this year's largest fire, which broke out on Sunday noon and quickly spread due to winds exceeding 70 kilometers (43.4 miles).

As part of efforts to extinguish the blaze, a fire management and control helicopter conducted Monday a night flight for the first time in Turkey, determining the coordinates of fires in 12 remote locations through thermal cameras, The Ministry of Agriculture and Forestry said in a statement.

Using the coordinates, ground crews were able to intervene in the fire in Yeniköy, Beyler and Kavacık villages.

The ministry also said that there are 776 fire monitoring towers throughout Turkey in addition to 1,800 camera systems, 254 of which are located in Izmir, where 39 heat-sensitive camera traps have also been installed.

Izmir, Turkey's third-largest city, saw three large-scale forest fires in the last decade. A four-day fire in 2017 in the Menderes district destroyed about 1,000 hectares of land. In 2009, some 700 hectares of land were burned when a forest fire was aggravated by strong winds that hit an area between Doğanbey Gulf and Seferihisar.

Winds also worsened a forest fire that devastated about 400 hectares of land in the southwestern city of Muğla on July 10. Like the İzmir fire, it also took firefighters three days to contain the fire and cool the area.