Syrian refugees in Turkey open up about their new lives 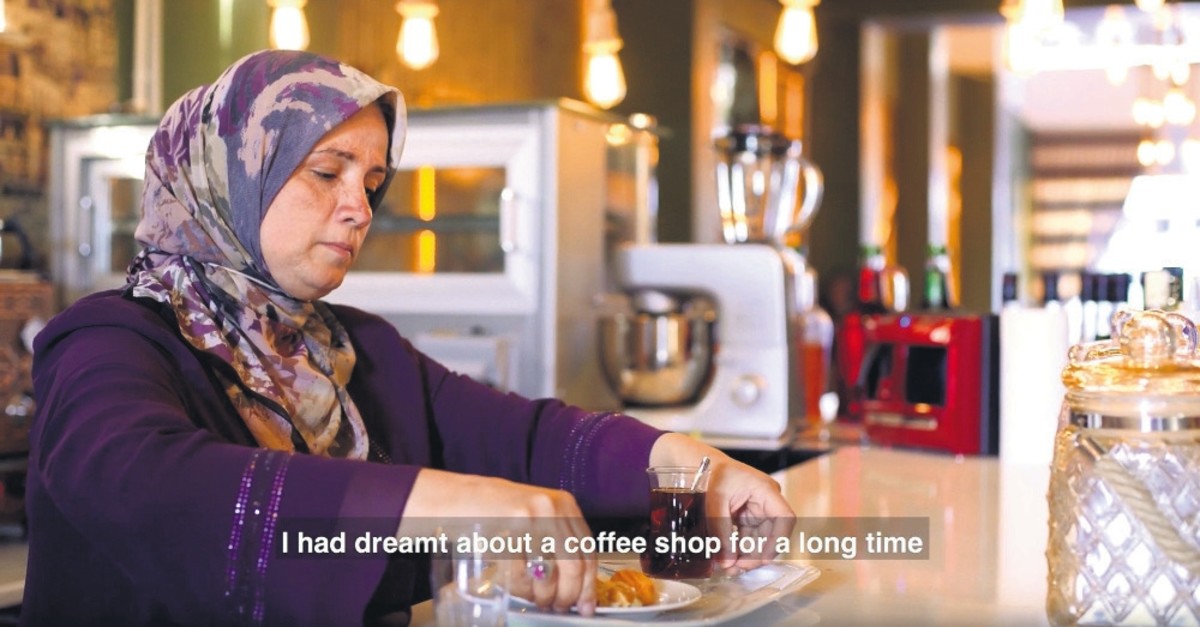 A screenshot from one of the videos shows a refugee speaking about her experience in Turkey where she now runs a coffee shop.
by Daily Sabah Aug 21, 2019 12:04 am

Since 2011 a large Syrian refugee community has thrived in Turkey, now they tell their stories and of the lives they rebuilt in Turkey through online videos

The Presidency's Directorate of Communications launched a new online video series Tuesday that captures the lives of Syrian refugees in Turkey and tells their stories before and after taking shelter in the country. In "Lives in Turkey," six refugees who rebuilt their lives shattered by the ongoing conflict in Syria recount the suffering they faced in the war-torn country and how they found peace in Turkey, home to more than 3.5 million refugees. Turkey has been a bastion for Syrians since the crisis erupted in 2011, when Bashar Assad's regime brutally repressed peaceful calls for democracy. In June, the U.N. refugee agency, UNHCR, reported that Turkey has been hosting the most refugees for the fifth consecutive year.

Interior Ministry figures say the number of refugees in Turkey was 4.2 million in 2017 and has now reached 4.9 million. Ankara has spent nearly $40 billion so far for the refugees, while it has only received about 6 billion euros of support from the international community.

The Directorate of Communications celebrates six individuals who rebuilt their lives and made a difference in Turkey. pic.twitter.com/EVow6gwjoS

"I saw death in front of my eyes. It felt like I'd be killed by one side or the other. I left everything and came here for my children," a woman refugee in one video says. "I heard of a place called ÇATOM, a Turkish language learning center. Since I live here, I have to learn the language of the country where I live, so I went there. After learning enough Turkish to communicate, ÇATOM's manager contacted me and she offered me a job," she said, referring to the Multi-Purpose Social Centers for disadvantaged communities. Learning Turkish and saving money helped her start her own business.

"Some Syrian men do not allow their wives to go to mixed coffee shops. I had dreamt about a coffee shop for a long time, so I opened one exclusively for women," she said.

"We started over here and now we have a beautiful life, a good life full of hope," she added.

A refugee turned successful businessman recounts how his life in Syria was devastated by the war. "The city wasn't safe anymore. No communications, no electricity, no water. We had to leave the country."

He and his family planned to stay in Gaziantep, a border city with Syria, for a few months, waiting for "things to settle in Syria." As the conflict continued, he says he had to find a job. A businessman back home, he started working for others before finding a chance to set up his own business, a factory manufacturing production lines and packaging systems. "At the beginning, the facility was very small, around 300 square meters only. The company has grown massively. It is now 3,000 square meters, and we are working hard and with Allah's blessing, we are exporting our products to over 42 countries around the world," he says.

"We were under siege and had no choice but to seek refuge in Turkey. The majority went across the border illegally," another refugee, who runs a phone shop, says. "When I come here, I struggled to open my shop. Language was a big barrier but over time I started learning Turkish. A year and a half later, I opened my shop. If you ask anyone in the area, they will give you directions to me here." "To not let Turkish people feel uncomfortable, because they pay taxes and I don't, I decided to register my shop legally. I wanted to be a law-abiding citizen just like any Turkish person here. I thought it would be better and would make me feel comfortable," he said.

Through tears, another refugee recounts the bombing of her house. "We had nothing left. I told my husband that I wanted to go to Turkey to protect my children even if I have to live under a tree."

The family found shelter in a refugee camp in Turkey, and it was there she found her current line of business, a lifelong learning teacher. "[In the camp] they allocated this room to us and provided all the necessary materials. So, we started teaching courses in mosaic [making]. As a mother, I dream of seeing my children educated and at the top, but as a woman, I want to make a difference, like any successful woman.

"I no longer feel broken like a refugee. When I make a mosaic painting, I see the smile on people's faces and I feel that I am achieving my dreams," she said.

A refugee who now works as a teacher said they had no job opportunities when they first arrived. "Leaving Syria meant we had no job opportunities because we had nothing to [prove of our career in Syria]. Degree documents, experience records were being withheld by the government. My career in the medical sector was over the moment we arrived here," he says. Like tens of thousands of others, he was placed in a refugee camp. "The process wasn't easy and took very long. We started seeking employment. I found a job as a teacher through UNICEF and was appointed as a volunteer in schools," he recounted.

Another refugee, who was a lecturer at the University of Aleppo and a founder of a university in northern Syria, found his life in danger as a member of the Syrian opposition. A political prisoner, he took his family with him and left for Syria after his release. He was instrumental in establishing an Arabic studies department at Gaziantep University and this year, he is proud to see the first group of Syrian students, refugees like him, graduate from the department he helped establish.