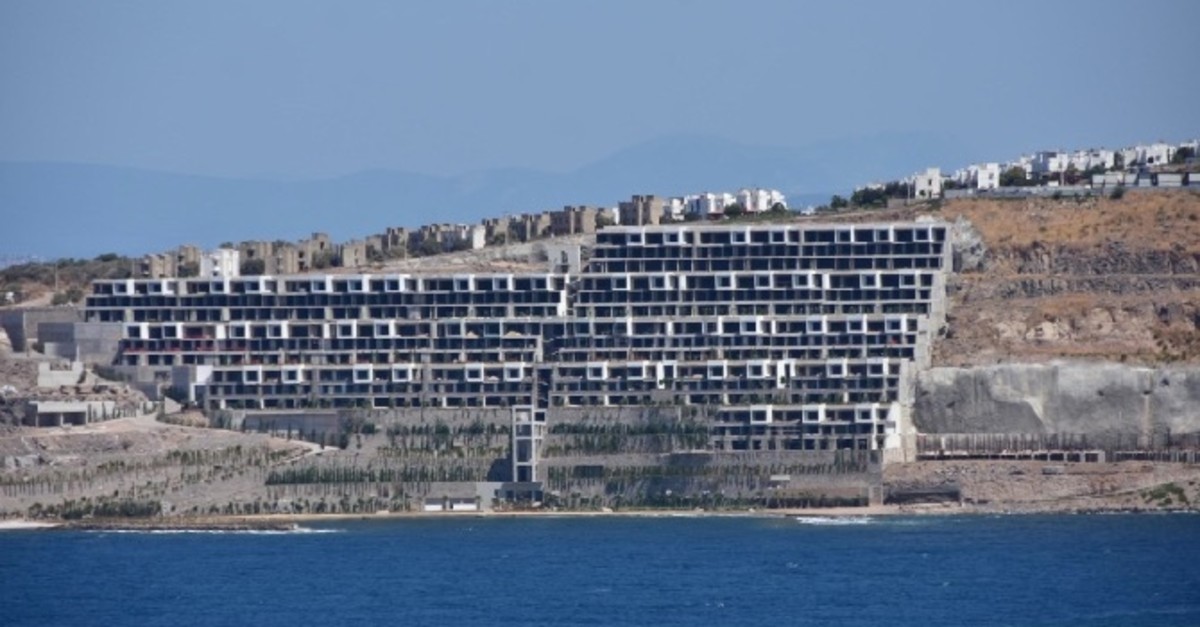 The Bo Viera hotel and apartment complex project in Bodrum is among the sites where construction was ordered to be stopped for violations of construction permits.
by Daily Sabah Aug 22, 2019 12:20 am

Amid growing criticism of buildings dotting the shores of Bodrum, probably Turkey's most popular resort town, the government launched a fight to stop illegal construction in the area and gave a deadline to construction companies to either demolish or fix the illegal additions. Photos of buildings in Bodrum, on the coast of the southwestern Aegean province of Muğla, went viral on social media recently, with people decrying the "eyesore" buildings, from hotels to apartment complexes on the pristine beaches at the outskirts of hills where trees were chopped down for construction. Minister of Environment and Urbanization Murat Kurum paid a visit to the town on Tuesday and announced they stopped the construction of 1,611 apartments and four hotels undertaken by eight companies for "violations of construction permits."

He said they gave companies one month to fix the illegal construction and vowed they would demolish the places if companies do not comply. Kurum noted that his ministry found more than 20,000 illegally built structures across Turkey and 7,200 of them were on coastal strips, noting that 3,260 among them was in Muğla, which is also home to other popular resort towns like Marmaris.

Companies are now obliged to amend the illegally constructed parts of buildings that are being sold for millions of dollars. Illegal additions often involve extra floors not registered in building permits or changes in construction plans without authorization. For instance, The Bo Viera, one of the construction projects, was built as a single-block complex, instead of 26 complexes separated from each other for reasonable distances as the permit calls for. It was Bo Viera's photo which went viral online with its "ugly" concrete "mass" against the backdrop of a barren hill. Municipalities are criticized for approving building permits for hotels and apartment complexes in areas that should be preserved for forests and the natural beauties they house. Murat Kurum says 1,300 buildings in Muğla were located in "special environment protection areas" where any construction is banned. He noted about 75% of the Muğla province consisted of "protection areas" due to its historic heritage and forests. "We won't allow illegal construction here or anywhere in Turkey and are determined to continue our fight against illegal buildings. Currently, our teams are examining buildings for violations of construction permits," he said.

Among the buildings whose construction was stopped are 75 villas in the Yalıkavak neighborhood, a 90-room hotel and 330 apartments in Gündoğan neighborhood.

Kurum said construction companies had one month to "fix the irregularities" and if they don't, local governorates would "fix" them. He referred to laws that allow for demolition of illegally built buildings or buildings with illegal additions and fines for builders.

On Bo Viera, Kurum said they discovered "irregularities" in the project both on a section of the building on the seafront and the section facing the hill. "There are problems regarding its elevation and integrity of apartment complexes. It also causes visual pollution," Kurum said, pointing out that they took "necessary measures" and sealed the construction. "We will never allow construction to continue before it's fixed," he underlined.