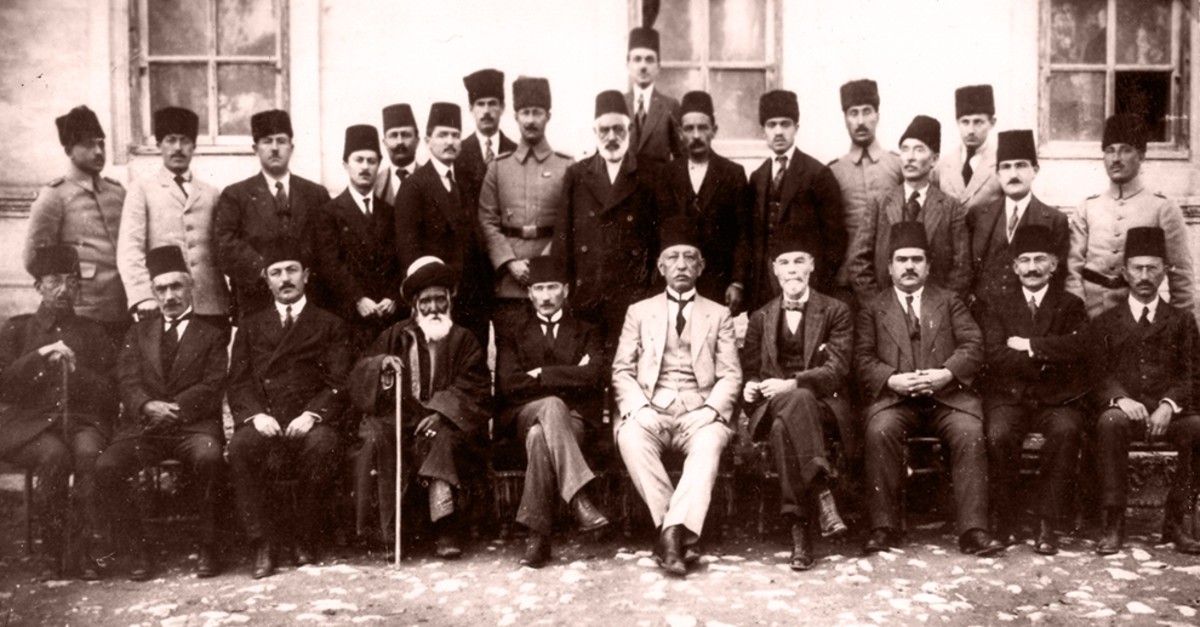 Mustafa Kemal Atatu00fcrk and delegates pose for a photo on the sidelines of the Sivas Congress in this undated photo.
by Daily Sabah Sep 05, 2019 12:19 am

Turkey yesterday marked the 100th anniversary of the Sivas Congress, a turning point in the country's history that paved the way for the fight for independence after World War I

The Sivas Congress, a historic event where founders of the Republic of Turkey planned the country's fight for independence and its future, was remembered on its 100th anniversary Wednesday. President Recep Tayyip Erdoğan and other dignitaries paid tribute to the Republic's founder Mustafa Kemal Atatürk and his colleagues at an event in the original building that hosted the congress on Sept. 4, 1919, in central Turkey.

The congress was a convention called by Mustafa Kemal, a successful Ottoman commander who then went on to become Mustafa Kemal Atatürk, the founder of modern Turkey, and the Kuva-ı Milliye or National Forces, who rallied behind the commander at the time of the post-World War I occupation of Turkey.

In a three-story high school, which survives to this day, 41 delegates representing the nation debated for eight days on the road map for moves against the invading forces of the Allies, which had occupied the Ottoman capital of Istanbul.

The convention was actually a culmination of Atatürk's Anatolia campaign that started when he arrived in the Black Sea city of Samsun on May 19, 1919, from Istanbul where he was one of the organizers of irregular forces planning a fight against the invaders. These irregular forces, composed of Ottoman soldiers and civilian volunteers, would later form the Kuva-ı Milliye. After a meeting in the eastern city of Erzurum where details for the Sivas Congress were planned, Atatürk and his fellow patriots met delegates from across Anatolia at a high school in Sivas under the shadow of occupying forces' threats and attempts to stop delegates from traveling to the city. Mustafa Kemal was elected the president of the congress that set the tone for the struggle that would be fought for independence.

The congress, held three years before the final stage of the War of Independence and four years before the declaration of the Republic, was a heated event where delegates argued over whether the nation should accept the occupation or fight against it. In the end, the congress agreed to fight the occupation. "Either independence or death," Atatürk said about the principles reached by the congress. The concepts of national sovereignty and national will were accepted and began to be reflected in Turkish state life with the Sivas Congress. The delegation of the congress became a first-degree body deciding the fate of the country, and the legitimate organs of the national movement were formed with the participation of newly elected members at the congress.

'Being under a foreign mandate cannot be accepted'

"The homeland cannot be divided. The nation as a whole will defend itself and resist against every foreign occupation and intervention. All the measures and decisions are taken to ensure the country's independence and integrity if the Istanbul government is forced to cede any part of our country in the face of pressure. The Kuva-ı Milliye is the only legitimate force, and the basic principle is the prevalence of national will. Being under a foreign mandate cannot be accepted," a declaration at the end of the congress read. It was also in Sivas that establishment of the new Parliament in the capital Ankara was decided upon.

The congress initiated a series of steps for mobilizing the nation for the upcoming war of independence. Among them were the establishment of a newspaper to promote the fight and establishment of a women's society for a more active role by women in the struggle. Atatürk and other military leaders stayed in Sivas for 108 days after the congress and used the congress building as an informal headquarters for national forces. "This is where we laid the foundation of the Republic," Atatürk would say years later when he visited the congress building again.

Speaking at an event in Sivas on the centenary of the congress, President Erdoğan said that the decisions at the congress were "a manifesto of independence to the world in the toughest times our nation faced."

"A century later, we repeat it: Mandate cannot be accepted, the country is a whole within its borders and cannot be divided," Erdoğan echoed the decisions in his speech. The president said Sept. 4, 1919, was the date where the first signal of national struggle [of independence] was given. "Delegates came from all around Turkey to demonstrate a national stand. They declared to the whole world that our nation will never bow down to occupying forces and they are ready and united for the struggle," Erdoğan said. The president drew a parallel between the War of Independence and Turkey's fight against putschists on July 15, 2016. "Our nation's resolve once again thwarted a treacherous attempt to deal a blow to national will and invade our country 97 years later," Erdoğan said.

Building at the heart of independence struggle

The Atatürk Congress Museum where the Sivas Congress was held today stands the test of time as witness to a milestone in Turkish history. The museum, built in 1892 as a high school, returned to its original purpose after the end of the 1919 congress and remained so until the 1980s before it was converted into a museum.

A classic piece of late period Ottoman architecture with its flat stone facade, an inner courtyard and spacious interiors, the building was restored to its former glory over the years. Visitors find the spirit of congress alive with the display of the desk, chair and pulpit used by Mustafa Kemal Atatürk during heated debates. Chairs used by delegates also survived and are on display inside the building, with photos of delegates attached to each. A room allocated to Atatürk during his 108 days in the city, is the main attraction of the building. The room was furnished with furniture donated by locals at the time for the future hero of the War of Independence.

Necip Günaydın, an academic from Sivas' Cumhuriyet University and author of a book on the congress, said it was the first grand and national event before the establishment of Parliament. "The decisions taken here were the decisions a nation made," Günaydın told Anadolu Agency (AA). He said that the convention was indeed a de facto government before the establishment of the Republic. "This seems like an ordinary place with a modest chair for Mustafa Kemal and cheap seats for delegates but this is a place where the fate of a country was determined."