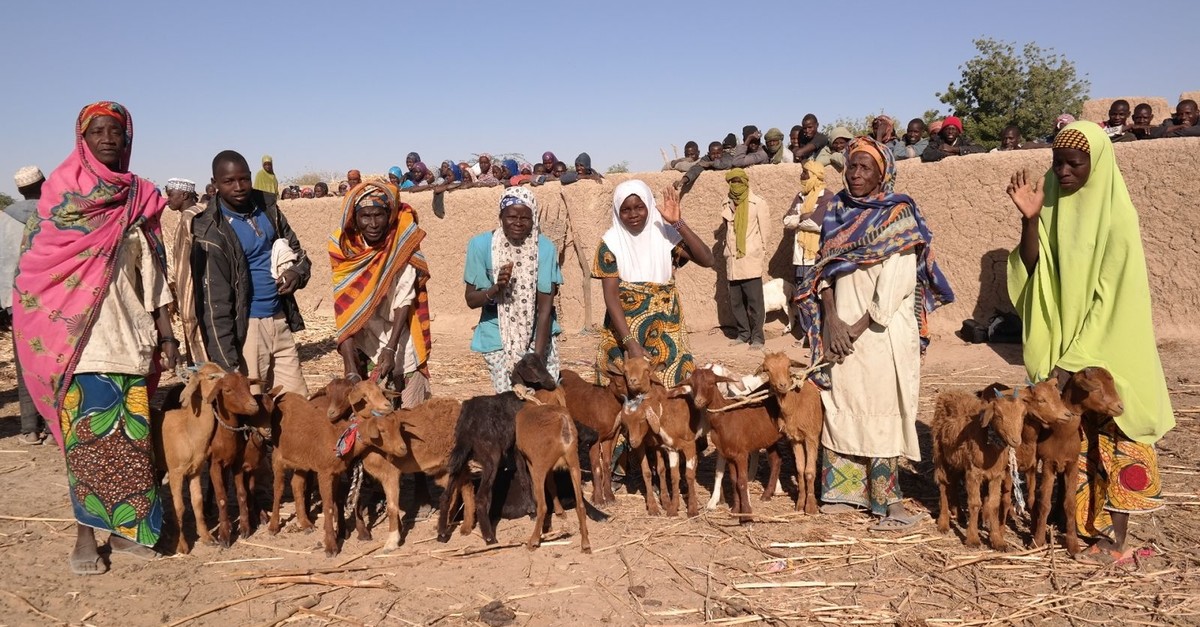 Goats are handed to women from impoverished families in Niger and Burkina Faso.
by Daily Sabah Sep 06, 2019 12:51 am

Charities look to diversify their work amid the prolonged humanitarian crises all across the world. In Africa, where hunger and drought displaces thousands every year and deals a blow to the economy, a Turkish charity is supplying dairy goats to families instead of routine aid package distribution.

The Istanbul-based İyilik (Goodness) Association started delivering goats to the needy in Niger and Burkina Faso for "sustainability."

The charity picked two countries in its project to create new livelihoods. Every family is given three dairy goats to grow and sell its milk or produce cheese and other dairy products. Livestock breeding is an important source of income especially in rural parts of two countries and among few sustainable resources. İyilik recently launched a campaign to rally its donors and asked for TL 400 to buy and donate goats. The charity's President Ahmet Turan Koçer says they are beyond a simple employment project. "These will boost [impoverished] families' self-reliance and faith in a better future. It is one of our landmark projects to boost their income," he said.

Koçer says they deliver goats to women in families and families use the goats both for their dairy needs, from cheese to milk and for sale of products. Every family is delivered two female and one male goat that cost about TL 1,200.

Agricultural gross domestic product in developing countries is mostly from livestock and figures show some 600 million rural people depend on livestock for income. As severe drought challenges growing crops, many families turn to livestock breeding for food and earning money. In Burkina Faso, a country of more than 17 million people, livestock breeding is responsible for at least 7% of national gross domestic product. However, animal diseases, limited pastures and drought plague breeding efforts. In Niger, red goats are popular in rural parts of the country, particularly in Maradi where they provide the main income for households. Goats give birth to two to three offspring per litter and they are known for their abundant milk production.

Turkish charities boosted their presence in Africa in recent years as Turkey looks to improve its ties with the continent with a new initiative for better bilateral ties. Sustainability is key in many projects initiated by Turkish charities. For instance, Niger and Burkina Faso are among recipient countries in water well aid. Charities opened hundreds of water wells in those countries and elsewhere in Africa to address the water shortage aggravated by recent onslaught of drought. Water wells built at central locations in villages save time for villagers and offers access to water for livestock in places where locals depend on livestock breeding for a living.