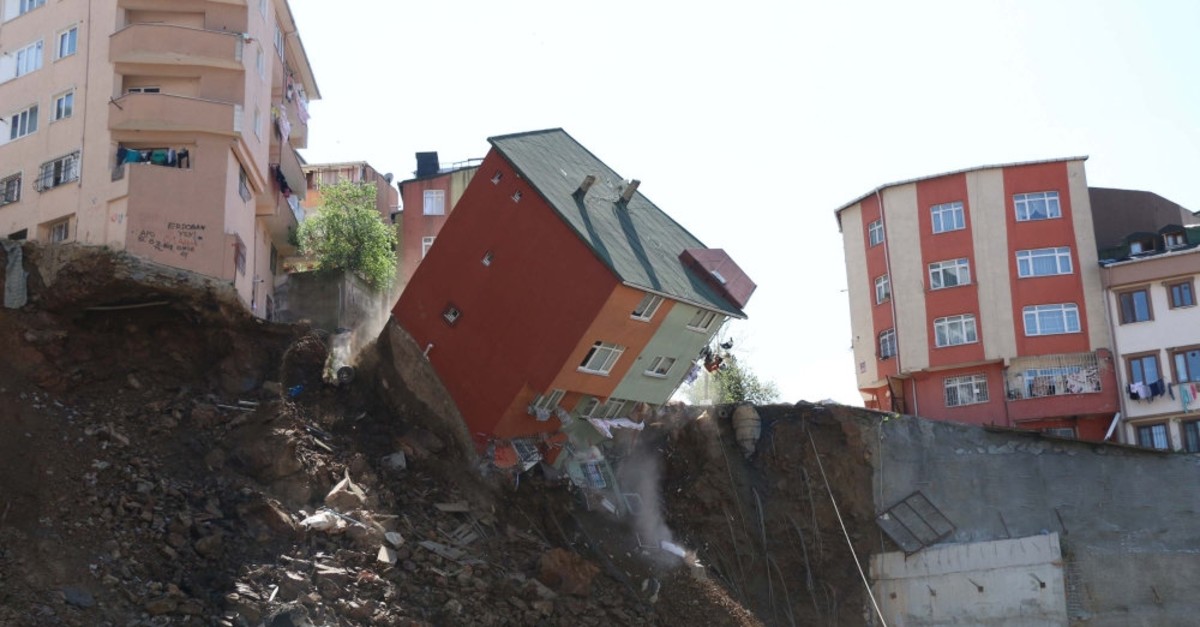 A poorly constructed building collapses in Istanbulu2019s Kau011fu0131thane, April 22, 2019. The neighborhood where the building was located, along with other substandard structures, was declared an urban transformation area.
by Daily Sabah Sep 14, 2019 12:04 am

The Ministry of Environment and Urbanization launched an ambitious action plan yesterday for an overhaul of cities. The Urban Transformation Action Plan aims to demolish risky old buildings and replace them with sustainable living spaces and improve downtown areas as well as historical sites. It will also resettle industrial sites near heavily populated areas.

The plan was unveiled by Environment and Urbanization Minister Murat Kurum, who said at a press conference that they drafted a strategy paper for the plan, "a kind of constitution for the cities' transformation." Every city will have their own set of rules peculiar to that city, Kurum highlighted.

As land is becoming scarce and worries remain concerning possible major disasters in the country that sits on several active fault lines, Turkey undertook an ambitious urban transformation project earlier, but this is the first time that such a massive transformation policy is being implemented.

Under the action plan, a strategy paper is being drafted, and the government already set out principles for transformation with instructions for municipalities.

Kurum said transformation projects would be determined based on each city's cultural and traditional texture, and new housing developments will be built under these guidelines based on several factors, including risks to public expectations, financial analysis, environmental concerns, housing and business needs. He said they also prepared a transformation guide outlining duties of every actor in the plan, including the ministry, the housing authority TOKİ, development banks, local administrations, citizens and investors.

Under the plan, at least 300,000 units will be demolished and replaced with new ones in five years, including 100,000 in Istanbul, the country's most populated city. Kurum pointed out that they launched tenders for transformation projects for 152,000 housing units so far, and they have already handed over 115,000 "transformed" units to their owners.

For Istanbul, Kurum said they would build 60,000 "backup" housing units to accommodate people whose houses will undergo transformations and plan to launch the construction of 8,000 of them by the end of year.

On the demolition of risky buildings that have a high risk of collapse in natural disasters or were illegally built, Kurum pledged all types of buildings not complying with current regulations in 81 provinces will be demolished. "90% of casualties in disasters, from 1923 to 2016, stemmed from earthquakes, and the rest were from landslides and floods. Floods and landslides in the past two years unfortunately increased the death toll. The main cause of casualties are increasing rainfall linked to climate change and poorly built buildings near riverbeds. We already announced a climate change action plan for the Black Sea region [one of the regions with high flood and landslide risk] and determined buildings at risk during floods. We decided to build 15,000 new housing units in the region. Similar actions for other regions that will be affected by climate change will be taken," Kurum pledged.

Another leg of the action plan involved improvement of historic downtown areas and squares and restoring their historical identity. Kurum said this leg of the plan also involves an overall ban on illegal buildings in natural and cultural areas, in highlands, villages and beaches. "We have hundreds of historic city centers and in all these areas, we are cooperating with municipalities to beautify streets, to renew the facades of buildings and to improve landscaping," the minister stated.