Ertuğrul: A tragedy that boosted the bonds between Turkey and Japan 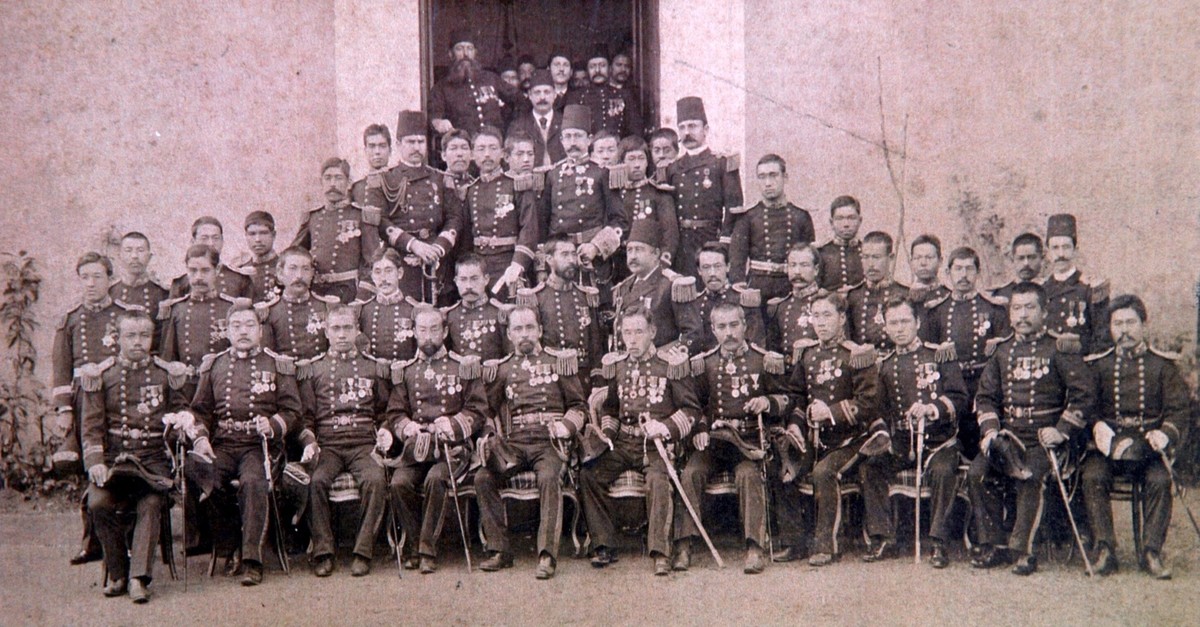 The Turkish delegation, crewmembers of Ertuu011frul pose with Japanese soldiers during Ertuu011frulu2019s visit to Japan in this undated photo.
by Compiled from Wire Services Sep 16, 2019 12:06 am

Today Turkey marks the 129th anniversary of the sinking of the Ertuğrul Frigate, an Ottoman ship that sank while returning from a goodwill voyage to Japan

It has been 129 years since the Ertuğrul Frigate sank with more than 600 Ottoman sailors aboard. Turkey today marks the tragic incident which paved the way for stronger Japanese-Turkish relations.

The disaster was the culmination of a relationship that stood the test of time between two countries separated by thousands of kilometers and little contact. Its legacy is an occasion of remembrance and celebration today with ceremonies being held both in Japan and Turkey.

The Ottoman Empire launched the Japan trip for Ertuğrul, which bears the name of the father of the empire's founder Osman, to Japan, two years after Japan's Prince Komatsu paid his country's first official visit to Istanbul, which was the capital of the empire. The ship departed Istanbul in July 1889 with 609 crewmembers. After stopovers in Egypt, Yemen, India, Sri Lanka, Singapore, Hong Kong and several Japanese cities, it arrived in Yokohama 11 months later. Osman Paşa who led the Ottoman delegation was received by Emperor Meiji and presented the emperor with a letter by Sultan Abdülhamid II and a medal. The frigate left Japan on Sept. 15, 1890 after the Ottoman delegation held talks with Japanese officials.

Adverse weather aggravated by a typhoon proved a challenge for the ship and it crashed on the rocks near Kushimoto on Sept. 16, 1890. Sixty-nine sailors aboard survived but 550 others aboard died when the ship sank. The survivors were rescued by the locals of Kushimoto. Turkey still remembers the hospitality and assistance of the Japanese public and the government after the incident. Survivors were sent home about one month later by the Japanese government aboard two Japanese warships that dropped them at Çanakkale, southwest of Istanbul. The ships also stayed in Turkey for a few months as guests of the Ottoman Empire before they returned to Japan. One year later, Japan erected a monument in memory of the perished Ottoman sailors in Kushimoto. Turkey restored the monument in 1937 and to this day, remembrance events are held in memory of Ertuğrul. Years later, Turkey would be hailed by Japan when Turkish Airlines upon instructions of the government helped the evacuation of a large number of Japanese nationals from Iran at the height of the Iran-Iraq war.

When the Republic of Turkey, which replaced the Ottoman Empire, was founded, Japan was one of the first countries it established diplomatic relations with in 1924. One year later, Turkey opened its first embassy in Japan. After decades of strong relations, both countries upgraded their ties to the level of "Strategic Partnership" in 2013. The countries also pursue a strong economic partnership. Along with a high trade volume, Japan is also among the major investors in Turkey, with at least 200 Japanese companies operating in the country. Lately, Japan, through its International Cooperation Agency, has been among the financiers of Turkish infrastructure projects like a landmark underwater rail link in Istanbul called Marmaray, a bridge over Istanbul's Golden Horn and another bridge connecting the city's Asian and European sides. The agency also financed two dam projects in Turkey. The two countries also enjoy intimate relations in other fields. Japan declared 2019 as the Turkish Culture Year.

Sinan Levent, an assistant professor at Ankara University and an expert on Japanese political history, says the incident formed the basis for amicable relations between the two countries.

"The Ottoman delegation's visit consisted of the first organized visit to Japan from the Islamic world at the time and the first diplomatic relations between the Muslim world and Japan. Still, Japan lacked the attention about the importance of the visit," he told Anadolu Agency.