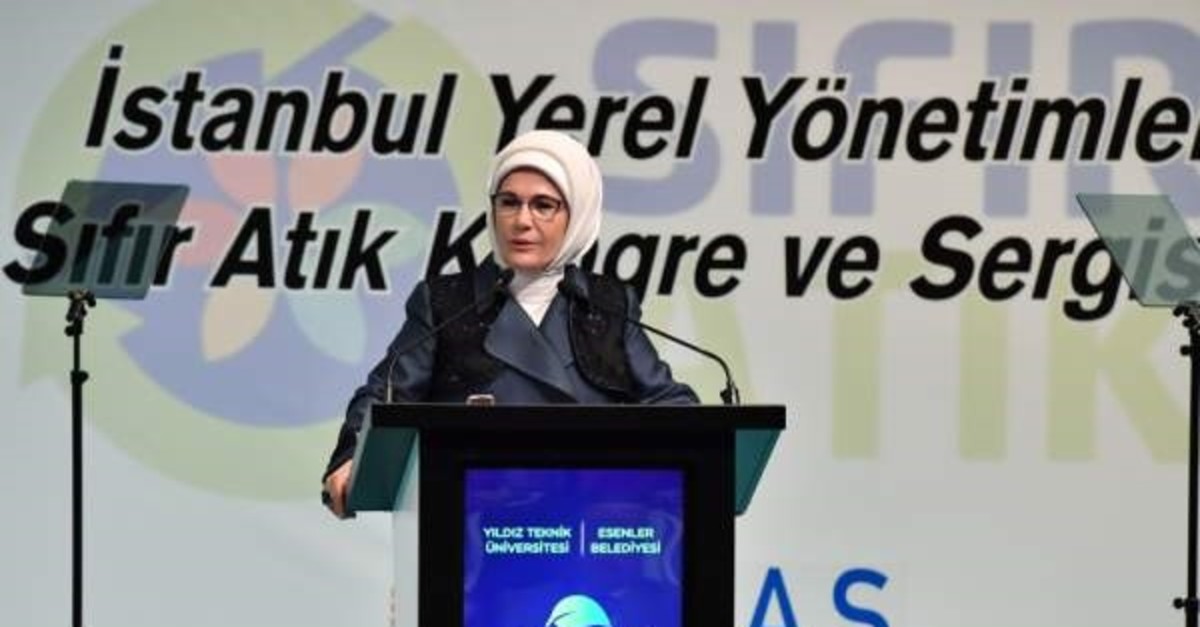 First lady Emine Erdoğan lauded the support for her Zero Waste Project and said the government was aiming for more progress in recycling efforts with new practices in the coming years.

Erdoğan, the architect of the project on minimizing waste and boost recycling, addressed Friday a congress of the Zero Waste Project local administrations, held at Yıldız Technical University.
The first lady praised the widespread support for the project, from local administrations to nongovernmental organizations and media. She noted that the paid plastic bag regulations as of January 2019, has helped reduce plastic bag use by 78%.
She added that they were now working to implement container deposit practice by 2021, “to take Turkey further forward in recycling.”

The project, launched in 2017, was embraced nationwide over the next two years. It was first applied at the Beştepe Presidential Complex and the ministries before being adopted by municipalities around the country as well as private companies and public buildings, from hospitals to schools. Currently, over 18,750 public institutions are part of the project, separating waste at its source.

Turkey looks to phase out landfills, whose numbers have considerably decreased in recent years, and switch to a recycling model where no waste would “go wasted.” The country has started to prioritize waste management over concerns of rising environmental damage, with municipalities responsible for garbage collection upgrading their waste management systems.

Emine Erdoğan said scientists alerted the world that there will be more plastic in oceans than fish in 2050 and the “catastrophe” would not be limited to oceans.
“Conflicts over climate change related issues and tragedies await us. We need to wake up and pay attention to the scientists to start building our future,” she said.
Erdoğan added that the Zero Waste project was part of this movement and she was proud to attend a congress on the issue. She said the project will be launched in all public agencies in the first half of 2020 and in the second half of next year, municipalities with a population of more than 250,000 people and industrial sites will be integrated into the system.
She said some 22,913 public agencies and institutions were integrated into the system and called for more to volunteer for the project. "It is important for municipalities to adopt the system. They contribute both to waste management and to raising public awareness,” she noted.