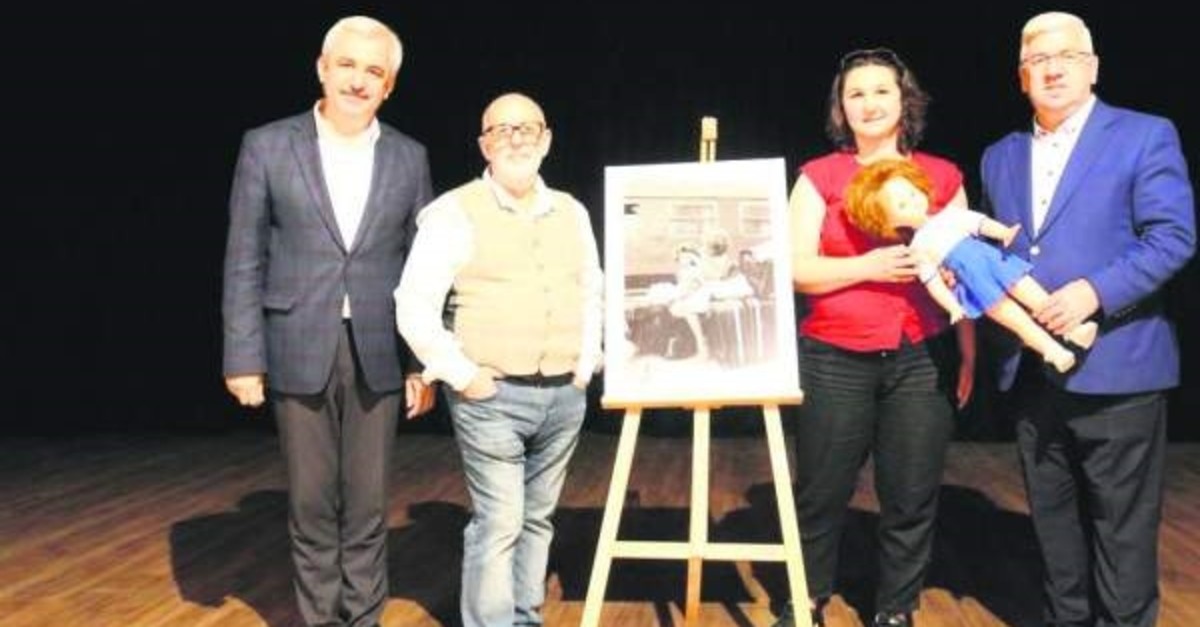 Aynur Yavuzkan, who became one of the symbols of Bulgaria's Turkish exodus, met the journalist who captured the moment she was holding her doll at a Turkish train station 30 years ago after being forced to leave Bulgaria

There is more than one photo symbolizing the plight of Bulgaria’s Turkish community who were forced to leave for Turkey in the face of oppression but the one with Aynur Yavuzkan stands out among them.
The six-year-old sitting on a suitcase and combing the hair of her doll against the backdrop of a train was a reflection of life going on for children while adults were suffering from trauma of displacement. It was Behiç Günalan who took the photo that adorned the front pages of newspapers and magazines in stories about the Bulgaria exodus in 1989 and the girl met him 30 years later in Tekirdağ, a city neighboring Edirne, where Yavuzkan first arrived with her family.
Forced to change their names and shed anything that could associate them with their ethnic identity, Turks who trace their history in the Balkan country to the centuries of Ottoman rule, left for Turkey in the 1980s. Some 350,000 people came to Turkey amid a harsh campaign to erase their identity by the Bulgarian regime between 1984 and 1989. Many resisted peacefully, but the regime never softened, culminating in a mass exodus in 1989. It was the largest migration of people in Europe after World War II.
Picking only what few belonging they could carry, the Turks had to depart in a hurry, leaving behind memories of their houses, the graves of their loved ones and sometimes, loved ones. Their destination was the Kapıkule border crossing dividing Bulgaria and Turkey. Gürsel and Ayşegül Köse were among them and accompanying them were their children, eight-year-old Ayhan and six-year-old Aynur. They boarded the train to Turkey and were resting when they arrived at a train station in Edirne. Aynur, wearing a tired smile, was barely aware of the purpose of this unexpected journey and was more engaged in caring for her doll than her surroundings. She still had time to pose for Behiç Günalan when the latter was looking for a perfect image to reflect that fateful day in the lives of Bulgarian Turkish exiles. Günalan found Aynur and her brother Ayhan 30 years later and they finally arranged a meeting in Tekirdağ. It was an emotional moment for both sides.
Yavuzkan saw her photos splashed across the front pages of newspapers and magazines years later but she never knew who took the photo. “I almost cried when I saw the photo here again,” she said at the reunion with Günalan. “I relived those days again. It was a difficult year for us but we always appreciate what our country did for us,” her brother Ayhan Köse said, referring to Turkey.
Behiç Günalan also relived those moments and how he took the photo. “It was a mess there that day. People were in a hurry and I could see the fear of uncertainty in their faces. They were migrants after all. In the middle of all those worried people, I saw a girl doing what a child would do in such a situation. She was combing the hair of her doll, trying to make it beautiful. I was, like, frozen in that moment. I snapped the photo but I don’t remember if I pushed the button because I was crying while taking the photo,” Günalan says. Günalan says he always wondered where that girl was. “It was like that girl on the cover of National Geographic and I needed to find her,” he says, referring to Sharbat Gula, who adorned the cover of a 1984 edition of the magazine and brought fame to her photographer Steve McCurry. Yavuzkan now has children and one thing connecting her to that photograph is the doll. “It was the apple of my eye and I took good care of it and gave it to my niece when I grew up,” she says. Yavuzkan says she does not remember much about the days she came to Turkey with her family and had little idea that her photo is now in an exhibition about the drama of Bulgarian Turks in Turkey. “It has been a surprise for me and I am thankful to Behiç Günalan for his photograph and I am glad to meet him 30 years later,” she says.
Her brother Ayhan remembers more than her. “She never left her doll when we arrived to Turkey. There was a great commotion and everyone was crying when the train entered Turkey. They were happy and sad. They were sad because they had to leave a country they lived in for centuries and happy to be in Turkey,” he says.
Under dictator Todor Zhivkov, who ruled Bulgaria from 1954 to 1989, an assimilation campaign against the Turkish minority in the country sought to curb their rights under the pretext of creating a homogeneous country. It started in 1984 with orders for Turks to change their Turkish-sounding names to Bulgarian ones and continued with a ban on speaking Turkish in public. It wasn't limited to language, and soon the mosques of the Turkish minority were closed by the communist dictatorship pursuing what it called a "Process of Revival." The community resisted through peaceful protests but increasing restrictions on their daily lives forced them to leave for neighboring Turkey where they were embraced by the government. The nation was angered by "Bulgarian cruelty to Turks," as the newspaper headlines of the era reflected.
On May 20, 1989, protests in Turkish villages faced crackdowns and increasing violence at the hands of the Bulgarian regime that forced many to flee to the border. This was what the regime sought, and when the borders were opened, thousands left for Turkey. Today, a large number of community members are scattered all across the country, particularly in the western cities and Istanbul where they reside in housing complexes built by the Turkish government for the victims.
Last Update: Dec 20, 2019 1:02 am