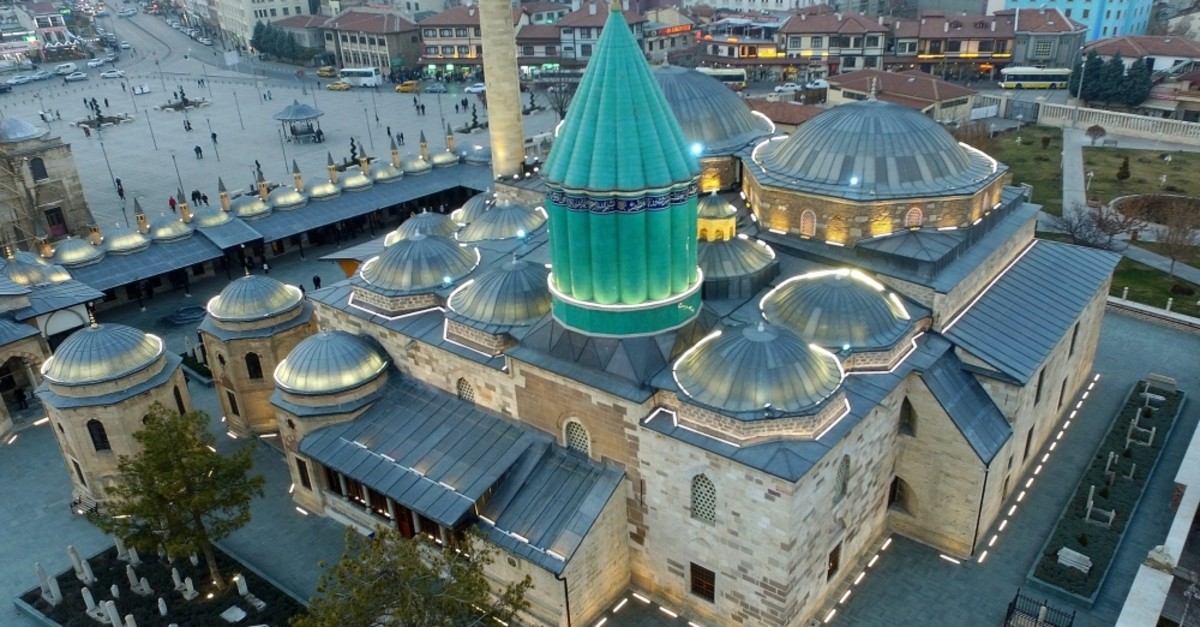 The route ends at tomb of Mevlana Celaleddin Rumi in Konya. (AA Photo)
by Daily Sabah with Agencies Oct 17, 2019 6:36 pm

The Sufi Trail, a new hiking and biking trail that starts from the tomb of Eyüp Sultan in Istanbul and ends at the tomb of famed Sufi mystic Rumi in Konya, offers foreign travelers an alternative faith tourism route peppered with natural beauties and historical sites

An 801-kilometer route from Istanbul to Konya takes foreign travelers from the tomb of a revered Islamic figure in Istanbul to the tomb of Mevlana Celaleddin Rumi, a world-renowned Sufi mystic. Along the way in “Sufi Trail,” travelers discover Anatolia and shrines, tombs of other sacred Sufi figures.
The “Sufi Trail,” a hiking and biking trail, is the brainchild of Netherlands-based Sedat Çakır, a writer and activist with Turkish origins, and Iris Bezuijen. It was formed in 2014 by the duo to revive locations where famed mystics, poets and scholars of Turkey once lived and raise awareness to culture and faith tourism in Turkey.
Participants, either on the bike or on foot, set out the journey from Eyüp Sultan Tomb in Istanbul. Eyüp Sultan, whose name was given to the Istanbul district where his tomb is located, is a companion of Prophet Muhammad. He was a prominent warrior in the Muslim campaign to conquer Constantinople and died in 672.
He was buried in the city but the location of his tomb wasn’t discovered for centuries and it was only after the Ottoman conquest of the city that his burial site was found and a tomb was built, along with a mosque there. Since then, his tomb has been a sacred site and a place where the Ottoman troops would visit before campaigns. Today, it still attracts a large number of visitors every day.

From Eyüp Sultan, bikers and hikers travel to Yalova, south of Istanbul, by ferry. From there, they walk or cycle along a route, from the northwestern city of Bursa to Bilecik, Eskişehir and Afyonkarahisar before arriving in their final destination of Konya, where the tomb of Mevlana Celaleddin Rumi is located.
Rumi, a 13th-century poet and mystic, is probably most famous of Sufi mystics who lived in Turkey. His tomb, known for its distinctive green color, has almost turned into a pilgrimage site for the faithful. Every year, people from all around the world convene in Konya to “celebrate” his death as Sufis see the death as a reunion with God rather than a sad departure.
Rumi’s teachings - based on tolerance, positive reasoning, goodness, charity and love - were the basis of the Mevlevi Order founded by his son and led to the birth of famous Whirling Dervishes practice of the order.

The trail allows travelers to see natural beauties and historical locations and hiking usually takes around 40 days. Sufi Trail gives guidelines to travelers but does not charge them. Speaking to Anadolu Agency (AA), Sedat Çakır said their purpose was to attract more foreigners to Turkey for faith tourism. “We have had Canadian, Dutch, German, Austrian, Brazilian and British guests so far. Each one of them left Turkey happy after completing the trail,” he said.

Though every traveler goes on their own or as groups, Sufi Trail arranges their meetings with trekking and biking clubs in every city they visit for better coordination of a trip along the route. Villagers in rural areas provide accommodation for travelers. Çakır says they usually cover a distance of 20 kilometers daily, based on their speed.
“They can stay in hotels and small lodges and if they are in villages, locals admit them. There are ‘village rooms’ where they can stay,” Çakır says, referring to a tradition in Anatolian village where small houses usually the size of a large room are located specifically to house the guests from outside the village. Village rooms, commonly owned by villagers or property of the richest person in the village, have been a thing of past in Anatolia but Çakır says that the Sufi Trail helps their revival.

Personal expenses of travelers also help improving local tourism in places that barely earn from tourism. Ahmet Yiğit, head of Yalova Ecotourism Association, says having such travelers is always a plus for them.
“They spend at least two days here and go from village to village. We work on how to make villagers earn money from ecotourism thanks to Sufi Trail participants,” he says.