90,000 illegal migrants stopped at the gates of Europe 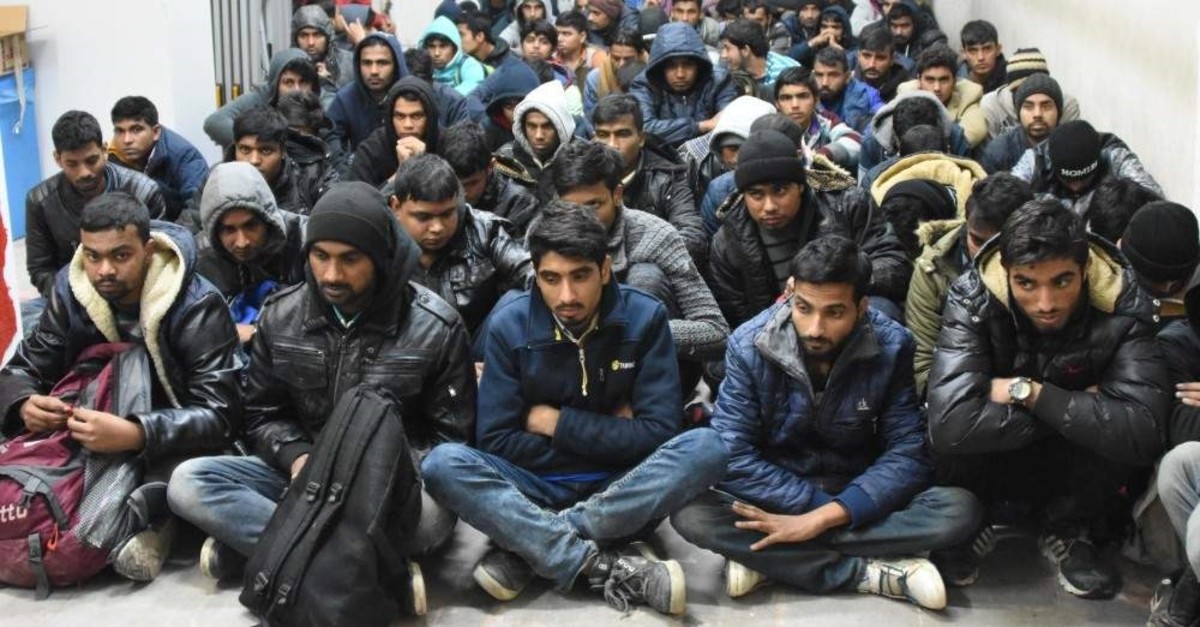 The latest figures show that more than 90,000 illegal migrants were caught by Turkish security forces before their attempted journeys by land to Europe, a primary destination for migrants from all around the world.

Figures compiled by Anadolu Agency (AA) from security sources say the migrants were intercepted in the first nine months of this year in Edirne, a northwestern province. The province, which shares borders with Bulgaria to the north and Greece to the west is popular among illegal migrants as European intolerance toward migrants fails to deter them. It is the most feasible destination for a land crossing into the continent while crossings by the Aegean Sea are more dangerous. In 2016, some 29,670 illegal migrants were held while trying to reach Europe. The number of illegal migrants held totaled 47,731 in 2017 and 74,734 in 2018 in the same province.

Turkey has been a key transit point for illegal migrants aiming to cross to Europe to start new lives, especially those fleeing war and persecution. Officials estimate that the number of illegal migrants held in Edirne will reach 110,000 at the end of 2019. The migrants included Pakistani, Congolese, Syrian, Iraqi, Iranian, Afghan, Tunisian, Kuwaiti, Moroccan, Egyptian, Libyan, Bangladeshi, Algerian, Somali, Ghanaian, Yemeni, Palestinian, Nepali, Eritrean and Nigerian nationals. All of the migrants held during the course of the nine months were either taken to hospitals for medical treatment or transferred to provincial migration offices. In 2018, 268,000 illegal migrants were held in Turkey, according to the Interior Ministry. Some 336,707 migrants were held in Turkey in 2019 so far, said Interior Minister Süleyman Soylu.

Every year, hundreds of thousands of migrants flee civil conflict or economic hardship in their home countries with the hope of reaching Europe. Some migrants are able to make the dangerous journey over land or sea with the assistance of smugglers, who often abandon them, especially during sea journeys, after receiving thousands of dollars from each migrant. Others are stopped by Turkish security forces before crossing the border into Europe.

Edirne saw the mass arrivals of migrants last spring, with more than 2,000 migrants intercepted in a few days amid social media rumors that the border crossing would be opened for migrants traveling to Europe, four years after similar rumors sparked another migration en masse to Edirne with the ultimate aim of reaching Europe. Rumors often stem from Ankara's repeated warnings to Europe that Turkey might let illegal migrants go unchecked into the continent.

Last month, President Recep Tayyip Erdoğan warned the international community over the upcoming outcomes of a possible failure in the safe zone plan in northern Syria, saying that it would be forced to open its doors to Europe for refugees to enter.

"We may have to let them [the refugees] cross into Europe to get support," he said, underlining the country's disappointment over the Western world's lack of interest in backing both the safe zone project and lifting the burden of the refugees. Erdoğan said that Turkey aims to settle at least 1 million of the Syrians it took in since 2011 in its planned safe zone along the country's border with Syria.

"We haven't been able to receive the support from the world, particularly the EU, when it comes to sharing the burden of the refugees that we host. To receive [support], we might have to do this [opening the gates]," the president said.

Ankara and Brussels signed an agreement in 2016 to find a solution to the influx of refugees heading to the union.

According to the deal, Turkey was promised 6 billion euros ($6.63 billion) in financial aid, which was initially designed to be given to the country in two stages and be used by the Turkish government to finance projects for Syrian refugees. Visa freedom for Turkish citizens was also to be provided under the agreement. Finally, the customs union was to be updated in accordance with the deal.

For its part, Turkey took the responsibility of discouraging irregular migration through the Aegean Sea by taking stricter measures against human traffickers and improving the conditions of more than 3 million Syrians living in Turkey. Despite significant developments in the control of migration traffic, the EU has not delivered on its commitments.

European countries often bicker over how many migrants each should take in while the popularity of far-right movements grow in parallel with increasing xenophobia. Greece is the closest gateway for migrants traveling from Turkey but failure to accommodate migrants in better conditions and controversial "pushback" practice where migrants were allegedly beaten and forced to walk back to the Turkish side of the border remain concerning. An incident on Thursday also reflects a changing sentiment toward migrants. The International Organization for Migration (IOM) voiced concern following an attack in northern Greece on migrant buses carrying 380 people in what the IOM said was an isolated incident. Despite a police presence, nine buses taking families and vulnerable migrants to a site near Vrasna were forced to turn back as dozens of villagers blocked the road, hurled stones and chanted "close the border" and "throw out illegal migrants," according to images broadcast by public television Ert. The migrants were finally taken to hotels on the island of Eubee, 400 kilometers (250 miles) to the south. An IOM statement expressed concern "about the violent incidents that took place in the area of Vrasna,” which it termed "an isolated incident." The IOM urged government and non-government groups "to work together in order to prevent" similar situations from recurring.

Greece wants to create 20,000 places for migrants who are saturating small Greek islands in the Aegean Sea. Local officials have begun to push back against the government's plans, however, with the town of Penteli in the northern outskirts of Athens refusing to take in a group of unaccompanied minors. People who support the migrants have launched a leaflet campaign, and red paint was splattered on the Penteli town hall early Thursday, Greek media reported.