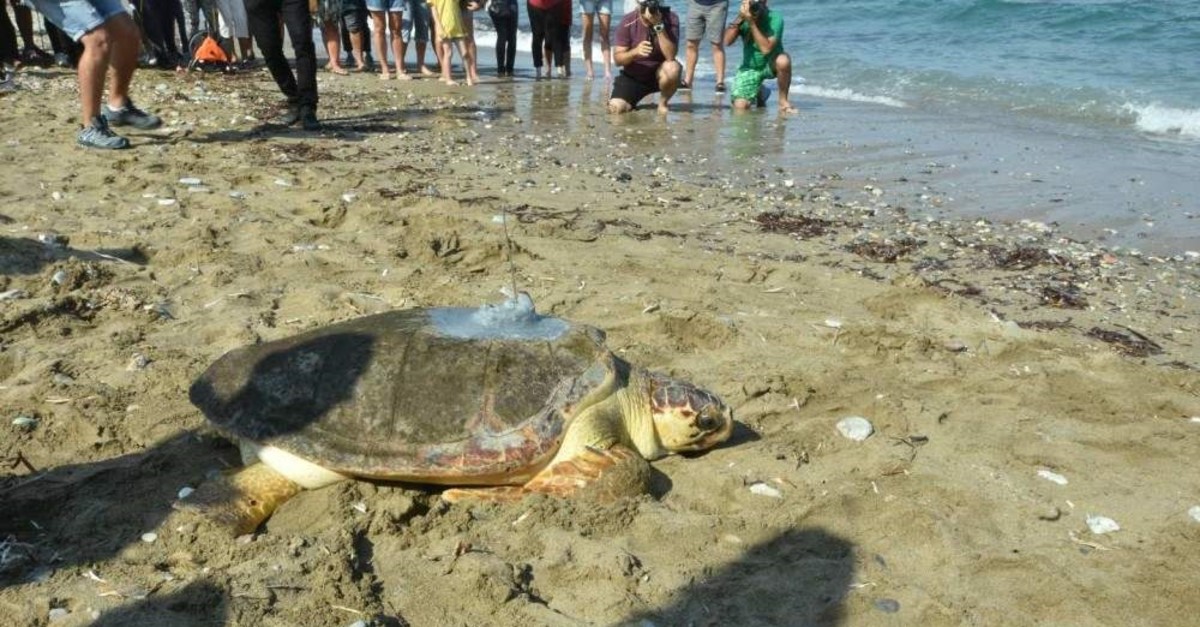 Astrid heads out to sea as her caretakers and locals watch in Girne, Oct. 28, 2019. (DHA Photo)
by Compiled from Wire Services Oct 28, 2019 6:50 pm
It took four years and intense rehabilitation, but Astrid the loggerhead returned home on Monday with a heartwarming ceremony.
The loggerhead turtle, or Caretta caretta, was found heavily injured on the coast of Girne in the Turkish Republic of Northern Cyprus in September 2015. She had wounds and fractures on her head, inflicted by unknown suspects, and visual impairment in one eye. She was taken in by a veterinary hospital of Yakın Doğu University. The hospital, in cooperation with a rehabilitation center for wild animals, treated and rehabilitated the turtle for four years before releasing her back into the sea. Animal rights activists, locals, university officials and veterinarians who cared for Astrid for years attended a farewell ceremony for the turtle on the Girne coast. Assistant professor Nazım Kaşot, who was among the veterinarians helping Astrid’s recovery at a rehabilitation center for turtles, said he was happy to send her back to the sea. “It was a long and challenging process for her, but she completed it,” he told reporters at the ceremony.
Loggerhead sea turtles are among the species on the International Union for Conservation of Nature (IUCN) Red List of threatened species. They are found in almost every ocean and sea worldwide, and Turkey’s southern and southwestern beaches are among their breeding grounds. They are the largest hard-shelled sea turtles alive and have an average lifespan of between 30 to 62 years in the wild. However, they occasionally face threats from human beings who abuse and sometimes kill them for no reason. Human disturbance of their nests on popular beaches also threatens the species.
Last Update: Dec 20, 2019 1:17 am
RELATED TOPICS