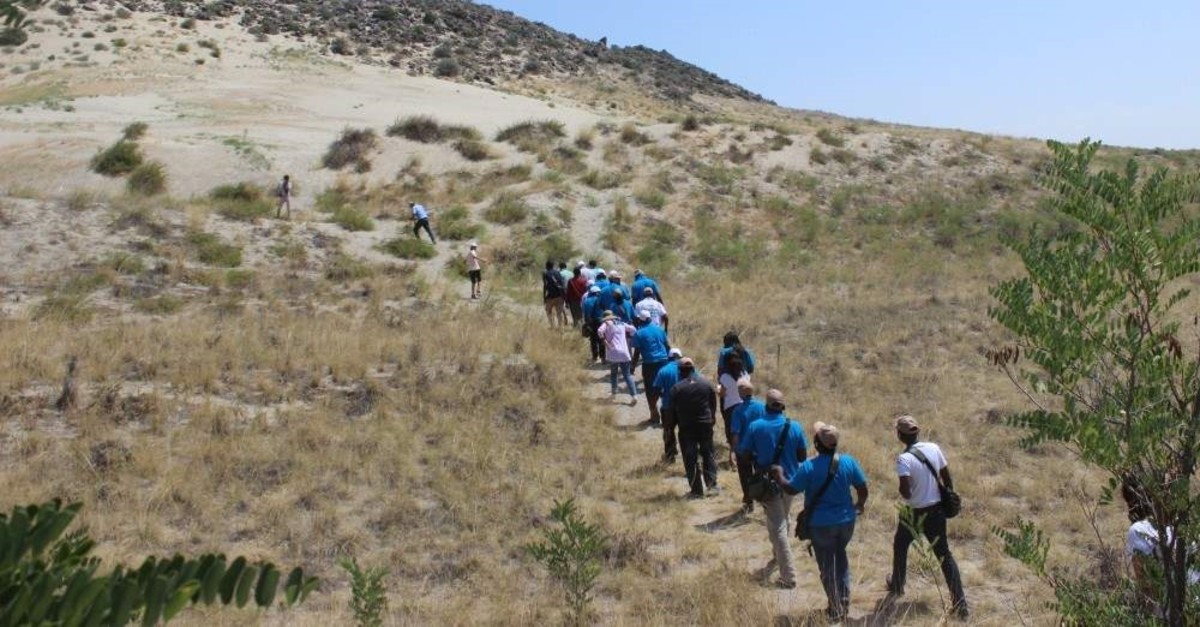 Experts hosted by Turkey's Ministry of Forestry and Agriculture tour Konya's town of Karap?nar, an area affected by severe erosion, Oct. 29, 2019, Konya, Turkey. (AA Photo)
by Daily Sabah Oct 29, 2019 4:43 pm
As one of the leading nations combating desertification, Turkey has so far trained 800 experts from 100 nations on methods to prevent erosion and desertification, the Ministry of Forestry and Agriculture said Tuesday.
Previously hosting the U.N.’s 2019 World Day to Combat Desertification and Drought, the ministry’s General Directorate of Combating Desertification and Erosion recently completed its 18th training event in Konya province.
The attendees were shown the ongoing forestation efforts in several areas near Konya’s town of Karapınar, where severe erosion has taken place. “This has been an informative training for us. The forestation efforts that have been made should be a lesson to humanity,” Sinisa Polovina, a Serbian expert on anti-desertification, said.
“This place used to be in bad shape after erosion. The land used to be covered in sand. Now there are trees. Vegetation has returned. This made us happy. These efforts show how much they care about this place,” Kazakh expert Yana Krekova said.
According to a 2018 report by the government, around 47% of Turkey’s territories are at risk of desertification.
Hosting various climates due to its diverse terrain, Turkey is at high risk for desertification stemming from the onset of climate change and other factors such as misuse of agricultural land and harmful irrigation methods.
More than half of Turkey’s soil has the characteristics of arid, semi-arid and semi-humid climates. Turkey's central and southeastern regions, known for their vast flatlands and steep mountains, are particularly vulnerable to the risk of desertification. Erosion is another threat for Turkey, where the elevation of most land is far higher than countries in its immediate region or European countries.
Speaking at the U.N. event in June, Agriculture and Forestry Minister Bekir Pakdemirli said Turkey managed to decrease the loss from 500 million tons of fertile soil yearly to 154 million tons since the 1970s as less and less land is exposed to erosion. He said their goal was decreasing it further to 130 million tons.
Last Update: Dec 20, 2019 1:18 am
RELATED TOPICS