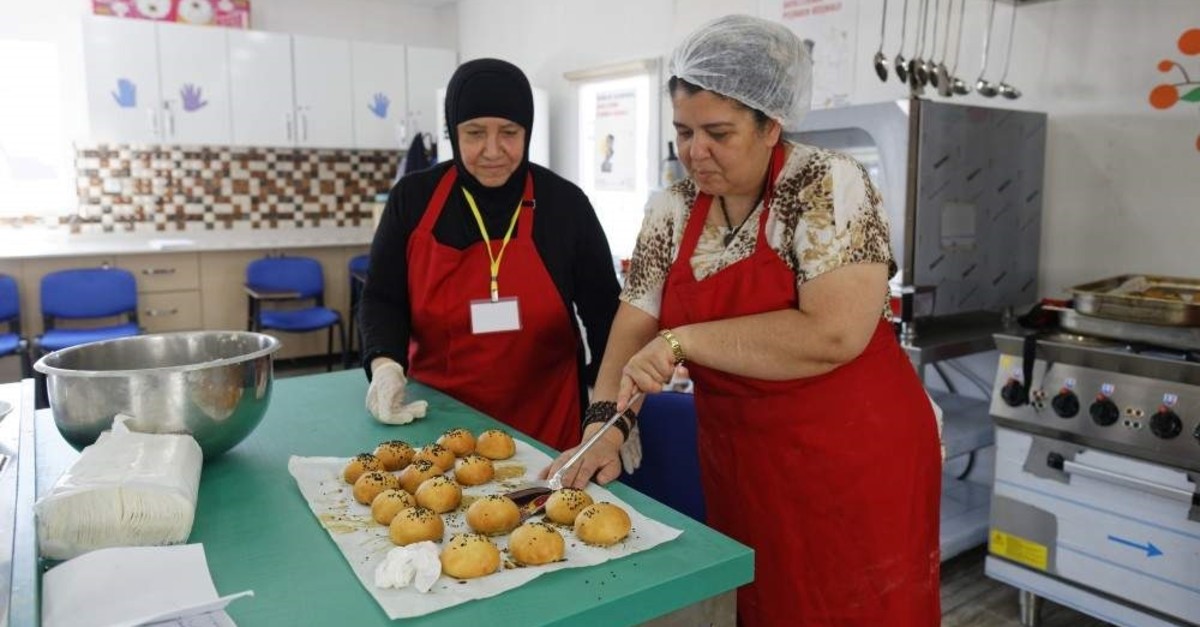 SADA, a business cooperative established by a group of Turkish, Afghan and Syrian women, has been invited to the Paris Peace Forum to share their story of success as one of the forum's top-100 initiatives in the category of economic inclusion

The Paris Peace Forum, due to launch in the French capital on November 12, will provide the setting for a series of success stories from a number of women from various backgrounds in Turkey.
The forum invited SADA, a business cooperative set up by 50 Syrian, Turkish and Afghan women in the southeastern Turkish province of Gaziantep in March 2019. The group is active in three sectors – namely, shoes and leather bag production, catering and home textiles. Within only three months of its inception, SADA was picked up by the Paris Peace Forum, an international event on global governance and multilateralism, and selected as one of its 100 most successful initiatives in the field of economic inclusion.
“We are enthusiastic, happy and eager to produce more! Now we are able to turn our skills into income. We are the women of SADA! We are Turkish, Syrian and Afghan, but most importantly we are together, and stronger than ever!” says Ümmühan Gül Ceylan, a Turkish member of the cooperative, whose name was inspired by the Arabic word for “echo." All members of the collective are fully engaged in manufacturing their wares and reaching out to ever-greater amounts of customers. “We always try to add dashes of Turkish, Syrian and Afghan motifs (to our desings). We reflect the harmony of our cooperative in our items,” says Hadice Tekin, one of the founding members of the group. “We are delighted at having been chosen as one of the most successful 100 initiatives. This is the result of women’s power and solidarity,” says Zukaa Najjar.
Dalal Shubak fled war-torn Syria with her five children, taking refuge in neighboring Turkey. “When I first came here, I was full of fear and uncertainty. A new country, new culture, new people... Here, I received great support and enrolled in vocational training. I started a new life for myself and my children. I got to develop my skills and now I can produce and earn money.” she said.
Dalal and many other women have benefitted from the SADA Women’s Empowerment and Solidarity Center. Financed by the European Union and the Government of Japan, the Center is a safe space that provides an enabling environment for women that are refugees or from the host community. Supported by the gender-responsive approach forwarded by U.N. Women, the SADA Center offers protection and livelihood support, nurturing social cohesion between communities. U.N. Women’s partners, including the Gaziantep Metropolitan Municipality, the Association for Solidarity with Asylum Seekers and Migrants and the International Labor Organization (ILO), have played a key role in helping SADA to function decisively as a unique source of empowerment for women.
Over 5,200 women have benefited from SADA’s services – with 3,000 of these having completed some form of vocational training. 50% of these women represented are highly vulnerable, at-risk individuals. In March 2019, the women at the SADA Center established the SADA Women’s Cooperative. “We have been developing our craft and making great strides in order to produce quality goods. It is now time to boost our efforts and start earning. This was once a dream for all of us and now it is becoming a reality,” says Safiye Mustafa, who enjoys not only the manufacturing side of the group's activities, but also how the cooperative functions in general: “The cooperative is run equally between us all. We make decisions together and create our marketing and sales strategy collectively.” The SADA Women’s Cooperative is made up of an executive board, an auditing commission and a marketing team, who are selected by vote. It has a business model fully shaped by women. As Mustafa states, everyone has a say, even on the products.
The cooperative is now ready for the Paris Peace Forum. Two women have been selected to represent the cooperative in Paris. Like all the women who are part of SADA, Nadriye Özmez is a proud member. She explains how much she has changed thanks to SADA and how this initiative realizes her dreams: “Before coming to the SADA Center, I was always at home and never went out. Here, I am producing and contributing to something beautiful. I've also made Syrian and Afghan friends. Before coming here, I had a lot of prejudice against them. Now, that's all gone. The closer you are, the better it is for all.”
Similar to Özmez, many women have shared their thoughts on how SADA and the cooperative have helped bring Turkish and refugee women closer together. They interact with one another and exchange much cultural knowledge. “Before coming here, I never spoke to Syrians, even if they lived in my neighborhood. Here, I learned that we can live together and learn a lot from one another. I show them our traditions and they show me theirs,” says Meltem Akkaya, adding that they have had a lot of fun over the course of these exchanges. “Now, we will present what we are doing at the Paris Peace Forum. We want to make an impact at the forum and we all are very excited. We have built many links in Gaziantep and we are trying to help our products reach as many customers as possible. We have attended various festivals and events, setting up stalls to show off our products, but now we are targetting the Turkish market, nationwide and beyond. Our aim is to reach international markets,” says Hadice Tekin, who works hard to publicize the group's success.
“Women are able to forge success and stand on their own two feet. They have to give it a shot! They have to leave their homes, cast away their preconceptions and try new things. This cooperative has enabled us to draw a future plan and the future is bright as we, the women of SADA, stand collectively strong,” she adds.
Turkey hosts at least 4.9 million refugees. Syrians make up the majority, while the country also receives a steady stream of migration from Afghanistan.
Last Update: Dec 20, 2019 1:22 am
RELATED TOPICS