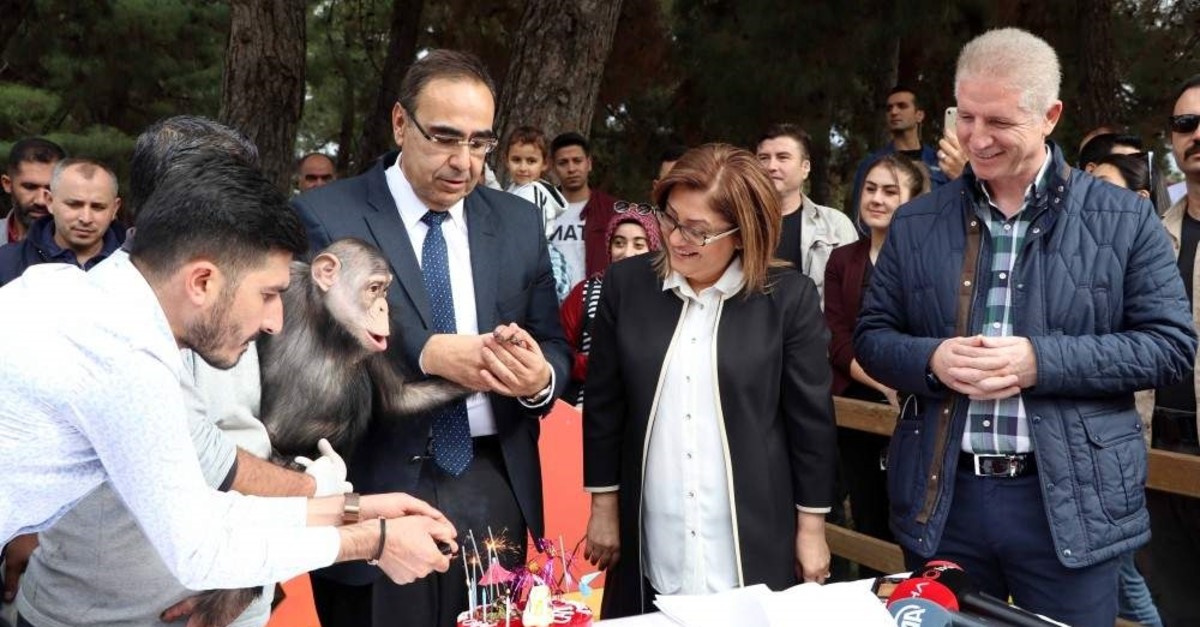 A birthday celebration was also held for the four-year-old Can, a chimpanzee, during the event at the Gaziantep zoo, where Gaziantep Metropolitan Mayor Fatma ?ahin (2nd right) also attended. (DHA Photo)
by Anadolu Agency Nov 03, 2019 11:16 pm

Two monkeys recently captured by the border security personnel at the Habur Border Gate in Turkey’s border with Iraq have been named Fıstık (Pistacchio in Turkish) and Zeytin (Olive in Turkish) following a voting Sunday at the Gaziantep Zoo, where they are now kept.

The voting was held at the zoo, with participation of Gaziantep Metropolitan Municipality Mayor Fatma Şahin and the public.

“All the medical treatment was completed for the monkeys. We held a survey on what to name them. As you know we [Gaziantep] are the gastronomy capital of the world. So all the names voted were related to that. Fıstık, Zeytin, and Biber (pepper in Turkish) were the top voted,” Şahin said during the event held at the zoo, which is the world’s fourth and Europe’s third largest.

Municipality’s Preserving Natural Life department head Celal Özsöyler also said that all the check-ups were done after the two animals were captured from the smugglers at the border. “All their organs were checked and they were kept under intensive care for two days. Their conditions are back to normal now and they are fed with protein-rich milk because they are not able to be breastfed by their mothers,” he added.

The names were picked among 200 others, Özsöyler also said. The male monkey Zeytin and Female monkey Fıstık were captured from the smugglers on Oct. 22 in a vehicle attempting cross in to Turkey.

Meanwhile, a birthday celebration was also held for a chimpanzee name Can during the event. A birthday cake was cut for Can who was born at the zoo and has turned four years old.