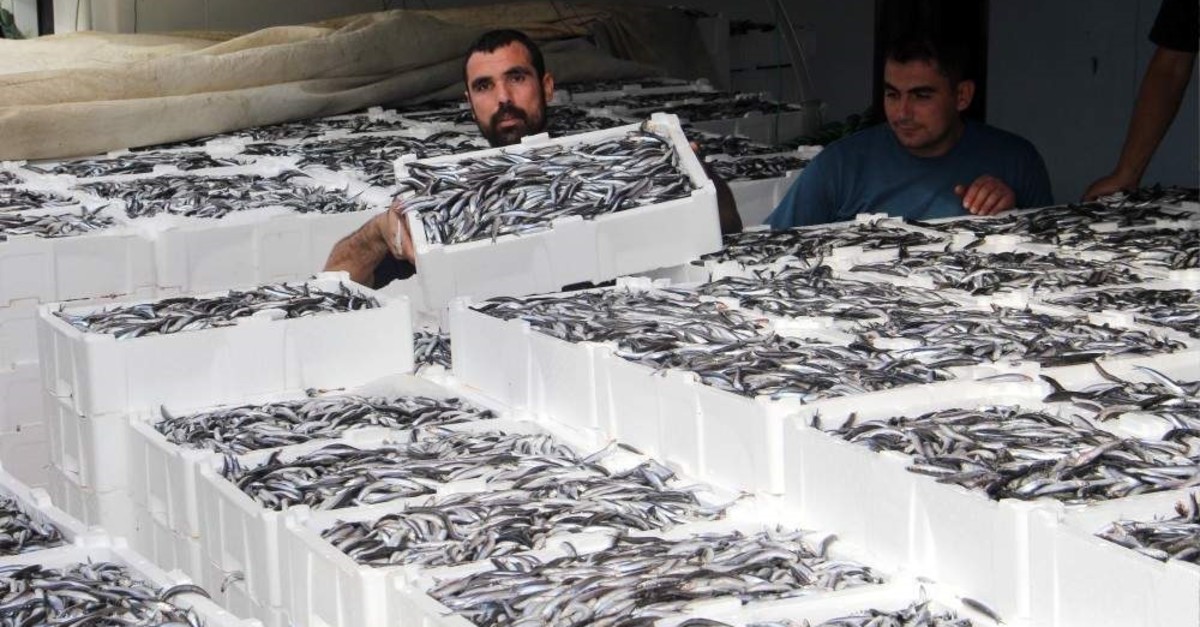 Local fishermen carry crates of European anchovies they caught in the Black Sea, Nov. 1, 2019. (AA Photo)
by Daily Sabah with AA Nov 07, 2019 2:17 pm
Turkey has proposed changes to its fisheries laws to stem marine pollution, crack down on poaching, and impose heavy penalties on violators, a lawmaker of the ruling Justice and Development (AK) Party said.
"This is a new disciplinary mechanism for sustainable fishing and fish resources, and protecting the environment," İsmail Emrah Karayel told Anadolu Agency.
The proposed changes were made in coordination with the Agriculture and Forestry Ministry, Fisheries and Aquaculture Directorate and Coast Guard Command, he said.
Speaking at an event discussing changes to the 1971 fisheries law, Karayel, a lawmaker from the central Turkish province of Kayseri, said the changes will make the law more relevant and stiffen penalties for wrongdoing.
Karayel said first-time offenders found trawling or seine net fishing will have their licenses suspended for a month, followed by a three-month suspension for a second offense, and license revocation for third-time offenders.
Under the changes, users of illegal electric pulse, blast fishing or chemical fishing will also face penalties, he added.
Light fishing or using artificial light to attract fish in the Marmara Sea, the Black Sea and the straits of Istanbul and Çanakkale will be prohibited, he added. He also said illegal fishing – which has grown exponentially in the straits, Black Sea and Marmara Sea – will be held in check through electronic monitoring and other technological means.
The changes will also bar the introduction of non-native species into Turkish waters. He went on to say that those who pollute water resources will face penalties.
"With this law, the number of fish will rise and efforts will be made to protect breeding areas," he stressed. "Turkey earns nearly $1 billion from exports of fishery products, while the country's imports are $150 million. That adds up to an $850 million net profit.”
According to experts, there was a need to update Turkey’s nearly half-century-old fisheries law taking into account technological advances, the needs of the sector, and scientific, environmental, economic and social factors. The proposed changes are set to go into effect on Jan. 1.
"Overall, the proposed changes are based on protecting and sustaining natural resources. They are more eco-friendly and aim to protect both suppliers and consumers," said Mehmet Gökoğlu, an expert on marine resources at Akdeniz University in Antalya, on Turkey's Mediterranean coast.
"The law was enforced to protect water resources, even though there were some shortcomings. The important thing is enforcement," he added.
To implement the law effectively and get positive results, he said, authorities need to know about fishing equipment, where and at what depth fishing should be carried out, and the effects of pollution and degradation.
Last Update: Dec 20, 2019 1:31 am
RELATED TOPICS