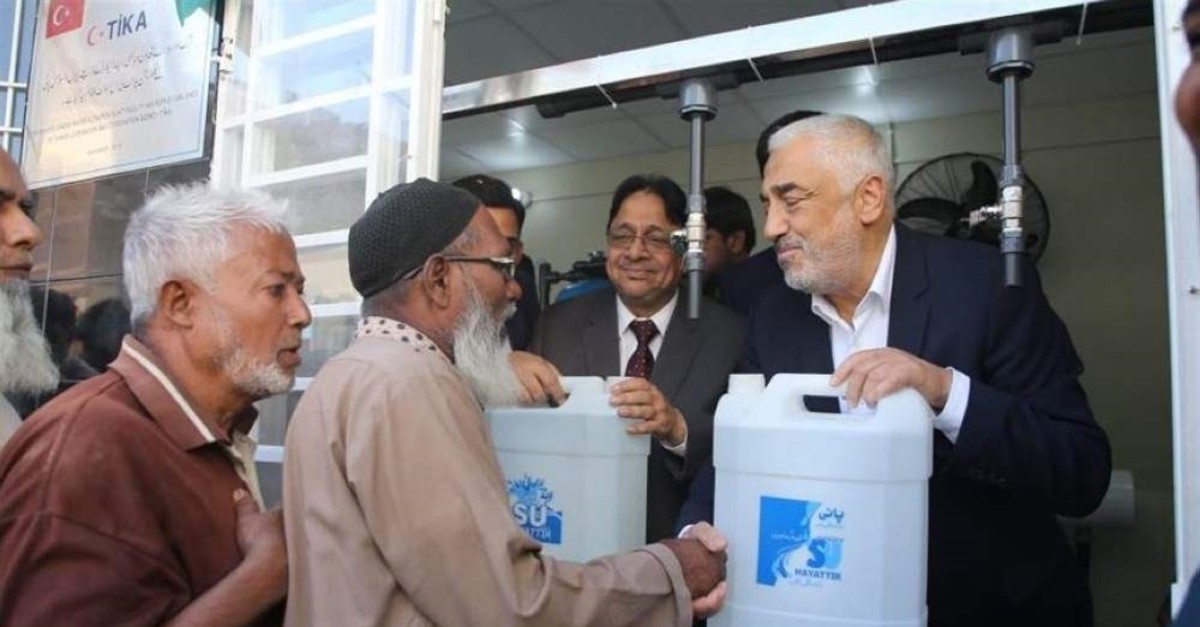 TIKA officials handing out bottles of filtered water to Pakistanis, Sindh, Pakistan. (AA Photo)
by Anadolu Agency
Nov 10, 2019 4:31 pm
Turkey's state aid agency has set up four water filtration facilities in Pakistan's southern Sindh province to provide clean water to around one million people.
The reverse osmosis water filtration facilities have been set up in the less developed areas of the port city of Karachi and Hyderabad in collaboration with Al-Khidmat Foundation, said a statement by the Turkish Cooperation and Coordination Agency (TIKA).
Kamil Kolabaş, an adviser to Turkish minister of culture and tourism, and TIKA's Karachi Coordinator Ibrahim Katırcu on Saturday inaugurated the water filtration facility in western Orangi town of Karachi.
Kolabaş, in his remarks at the inauguration ceremony, said that TIKA aimed to help provide clean and safe drinking water to the citizens of Oragni town through this project, adding that similar projects were being launched in other parts of the country to help citizens have access to the potable water.
Katırcı said the agency wanted to help Pakistanis in their fight against waterborne diseases through installation of reverse osmosis filtration plants across the country.
Salem Azhar, the chief executive officer of Al-Khidmat Fountaion Karachi, thanked the Turkish government and TIKA for establishing the water filtration facility that would benefit thousands of area residents.
Apart from Orangi town, TIKA has also established another three facilities in Karachi's F.B. Area, and Millatabad, and Pretabad areas of Hyderabad district.
Each plant has a capacity to filter 2,000 liters of water per hour. The number of beneficiaries is expected to be as high as one million people.
Previously, TIKA established three such facilities – two in the Landhi and Bufferzone areas of Karachi and one in Mithi in Tharparkar district.
In Mithi, 20 solar powered water wells were being built by TIKA.
Last Update: Dec 20, 2019 1:34 am