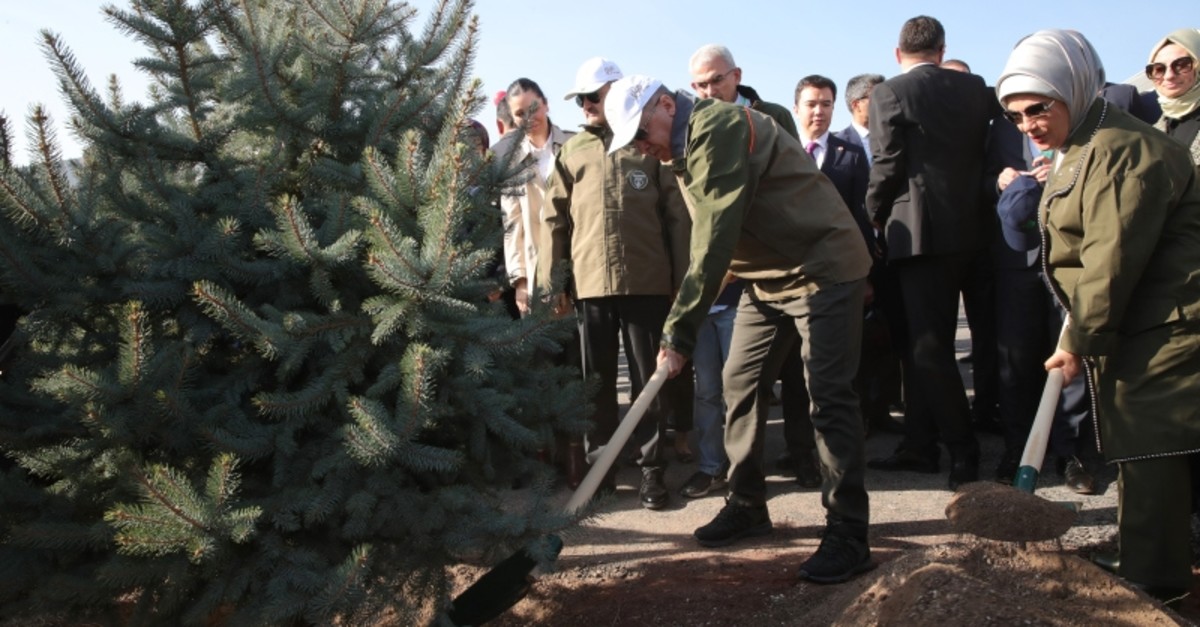 President Recep Tayyip Erdoğan on Monday kick-started Turkey's mass tree planting event, which aims to break a world record by planting the highest number of saplings in an hour.

More than 11 million saplings was planted during the "Breath for the Future" campaign organized by the Ministry of Agriculture and Forestry.

Speaking at the event after planting the first sapling, President Erdoğan said the event was being watched by officials from Guinness World Records and the campaign would set an example for the world.

Erdoğan said the mass tree planting event would be repeated every year on Nov. 11, which was declared as National Forestation Day last week. "From now on our citizens will be on the field to plant saplings at 11:11 a.m. every Nov. 11," the president said.

Reminding the media of the ruling Justice and Development Party's (AK Party) sensitivity to environmental issues, Erdoğan said AK Party governments have planted more than 4.5 billion saplings in the past 17 years and that no one could question their efforts for the environment.

"Some people tried to wreak havoc on our cities under the pretext of trees. They set streets on fire for weeks. Here we are, planting saplings, where are those trouble makers? Where are those who criticized us for our environment policies? None of them are here. They wanted to burn Turkey like firewood, not plant trees," Erdoğan said, referring to the 2013 Gezi Park riots.

"We increased our forested area from 20.8 million hectare to 22.6 million. We thereby reduced the mass of soil lost to erosion from 500 million tons to 154 million tons. We planted 14 million saplings of walnut, almond, olive, chestnut and laurel tree in line with our '5,000 forests for 5,000 villages' program. We helped our people earn more from their lands," he said.

Calling the event their "determination" to leave a brighter future for future generations, Erdoğan said the resulting forests would be gift for the children of the future and thanked everyone participating in the event.

Agriculture and Forestry Minister Bekir Pakdemirli said the total amount of land to be forested after the event would be more than 40 times the area lost to recent wildfires, adding that Turkey is one of the few countries that has a positive forestation rate.

"Before 2002, Turkey produced 75 million saplings per year but for the past 17 years, that number was increased to 350 million. In 2002, only a quarter of Turkey's lands were covered by forests; now this percentage has been increased to a third. In other words, we increased our forested area by 1.8 million hectares," Pakdemirli said, adding that the government planned to plant a total of 7 billion saplings by 2023.

In Turkey's northern province of Çorum, a team of volunteers worked against the clock to break the Guinness World Record for most saplings planted within an hour. Covering 156 hectares of land, volunteers planted a total of 301,111 saplings in an hour. The attempt was observed by government authorities and officials from Guinness World Records, who will announce the results of the attempt at a later date.

The current record is held by Indonesia with 232,647 saplings. India the record for most trees planted in one day, with more than 220 million planted in the state of Uttar Pradesh earlier in August.

The Aegean province of İzmir, where a wildfire in August destroyed 500 hectares of forest, had the most saplings planted, according to initial reports. Around 1 million saplings were planted by students, teachers, NGO members and public servants. Students who traveled from Bosnia-Herzegovina for the event also participated in the mass planting.

İzmir governor Erol Ayyıldız said the event was carried out at 29 points across the province with the participation of 42,000 volunteers.

Similar to İzmir, Muğla province also lost large swaths of forests to dozens of wildfires during last summer. More than 200,000 saplings were planted in the popular resort city.

The mass tree-planting event first made headlines in July when Erdoğan responded to Abdullah Enes Şahin, an environmental activist who urged state officials to designate a specific day for planting trees. Welcoming the suggestion, Erdoğan said he would make it happen.

The Agriculture and Forestry Ministry launched the campaign in August, just weeks after Şahin's message went viral. The campaign initially aimed to plant 3 million saplings in one go and to make it into the Guinness Book of World Records, but the number quickly grew as the campaign drew large amounts of interest from citizens.

Minister Pakdemirli said Turkish people expressed immense interest in the Nov. 11 event, with the slogan "For a Greener Turkey." A total of 13 million trees have been sponsored, and millions of people took part in the mass planting.

As the event ended, citizens from all walks of life, from students to convicts, trekked across thousands of kilometers of designated fields to plant the millions of saplings in hopes of bringing a bright shade of green into an ever-darkening world.