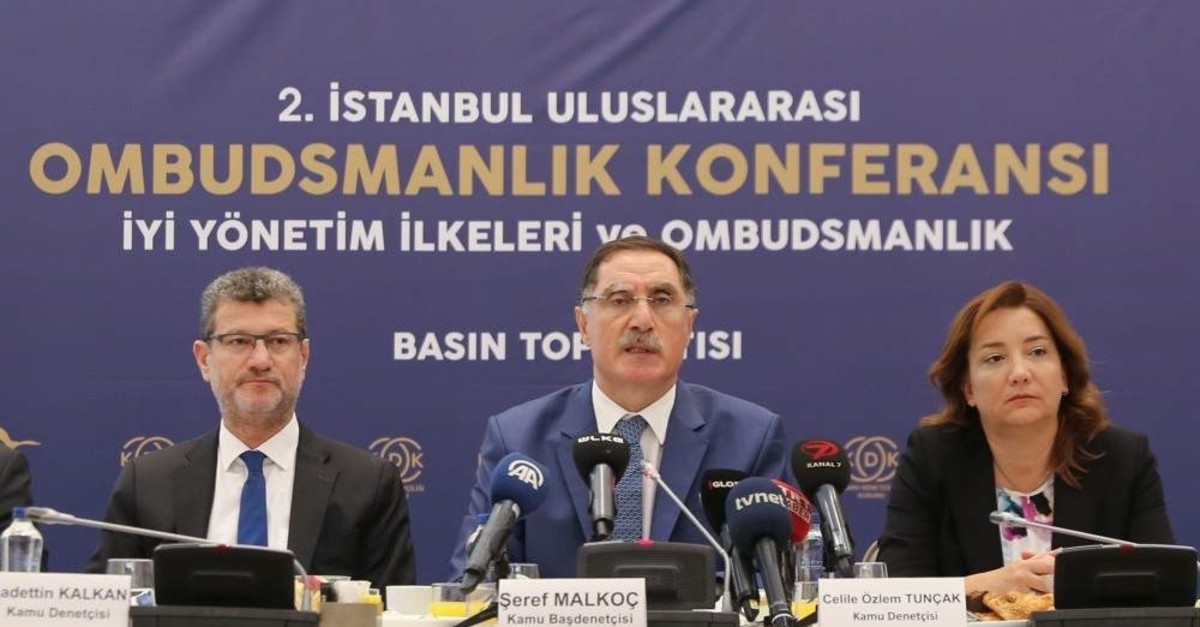 Turkey will host various guests from ombudsman institutions and human rights associations worldwide on Nov. 18 and 19 in Istanbul to discuss the recent developments in the field as well as to exchange views. Some 200 participants from 55 different countries are expected to attend the International Ombudsman Conference which is being held for the second time in Istanbul by Turkey’s Ombudsman Institution. The conference was organized within the scope of a European Union supported-project that aims to strengthen the government auditor’s role in the protection and promotion of human rights. Speaking at a press conference held Tuesday in Hilton Bomonti Hotel on Istanbul’s Anatolian side, Turkey’s Chief Auditor Şeref Malkoç said that one of their main goals is to promote the culture of one’s fighting for their rights. “Our goal is to improve the quality of public services, implementation of human rights in Turkey, the establishment of good management principles, the formation of transparent, people-oriented administration,” Malkoç further asserted. Turkey’s Ombudsman Institution which has been operating since 2013 aims to create a bridge between the people and the governmental bodies, Şeref explained, adding that the institution has an audit authority on every public institution and issues from municipality services to education and health, except the works of The Grand National Assembly of Turkey (TBMM) and the issues that were already presented to the court.

The institution would involve in a situation only after a citizen makes a complaint about it via several ways including social media, Malkoç added. Saying that it is essential to implement justice before it became too late, Malkoç noted the institution is working in this regard to meet the citizens’ needs and answer their problems. The institution which only rules for advisory jurisdictions that have no legal binding concludes each case in less than six months of a period. Although the outcomes are not court decisions, the institution has a solid impact on public institutions, Malkoç highlighted.

Some 17,148 applications were made to Turkey’s auditory body within 2019 which are concluded either with advisory decisions, or refusal due to various reasons such as their being taken to the court. Turkey is a member of a total of eight ombudsman institutions worldwide in which the country takes active roles. The country’s ombudsman institution is also very active across Turkey, holding meetings with ambassadors or organizing programs with university students. Only in 2019, some 23 meetings were held with ambassadors in capital Ankara while officials from the institution have visited 25 countries for meetings. The opening ceremony of the 2nd Istanbul International Ombudsman Conference will be on Nov. 18 in Dolmabahçe Palace while the conferences will be held in Bomonti Hilton Hotel.