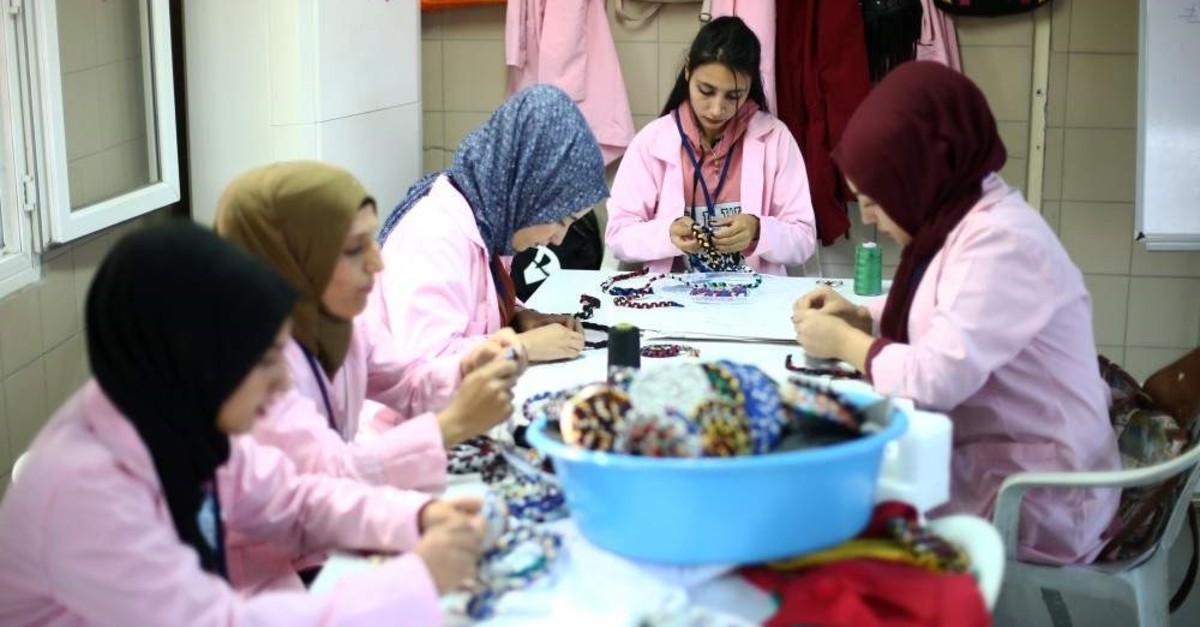 Syrian and Turkish women craft souvenirs in the cooperative. (AA Photo)
by Daily Sabah Nov 15, 2019 3:51 pm
Syrian refugee women and their Turkish neighbors have come up with a way to boost not only their livelihoods, but solidarity, with Ekmek Kapısı (Bread and Butter), a cooperative project endorsed by Turkey, the European Union and the United Nations. A total of 25 women took on vocational training to produce souvenirs and set up the cooperative in the southeastern city of Adana. It is part of a larger project to boost employment for refugees and increase opportunities for them for earn a livelihood through agriculture.
Fifteen Syrian and ten Turkish women learned handicrafts using recycled materials at a course endorsed by the U.N. Food and Agriculture Organization (FAO), the U.N. refugee agency (UNHCR) and the Turkish government. The training workshop provides assistance to Syrian women who have fled the civil war in their country, many having had to drop out of school or since struggling to make ends meet. Now, the refugee women, along with their fellow Turkish counterparts, have become skilled craftswomen manufacturing handbags, pillows and souvenirs, adopting a name for the workshop that reflects the basic requirements it allows them to afford for themselves and their families.
Ayşegül Selışık, assistant FAO representative in Turkey, stated that the project was nationwide and 1,115 people in eight cities were trained so far. Selışık told Anadolu Agency (AA) that 175 people, including 118 Syrians, attended the training programs on agriculture and handicrafts in Adana. “Ekmek Kapısı is the result of this training. We have women here who did not know how to design before, but can now draw, paint and design whatever they dream of,” she says.
Fatima Muhammad Ali, age 33, who arrived in Turkey after fleeing Syria’s Hama with her husband and six children five years ago, says the training helped her to earn money for the family. “I now have a job and additionally, I started learning Turkish here,” she says. Nazlı Ertem, a 20-year-old member of the cooperative, saying it added a lot to their lives. “We made new friends here. Our Syrian friends learn Turkish from us and they teach us Arabic too,” she says.
Last Update: Dec 20, 2019 1:42 am
RELATED TOPICS