Classes continue in border towns thanks to efforts by school teachers 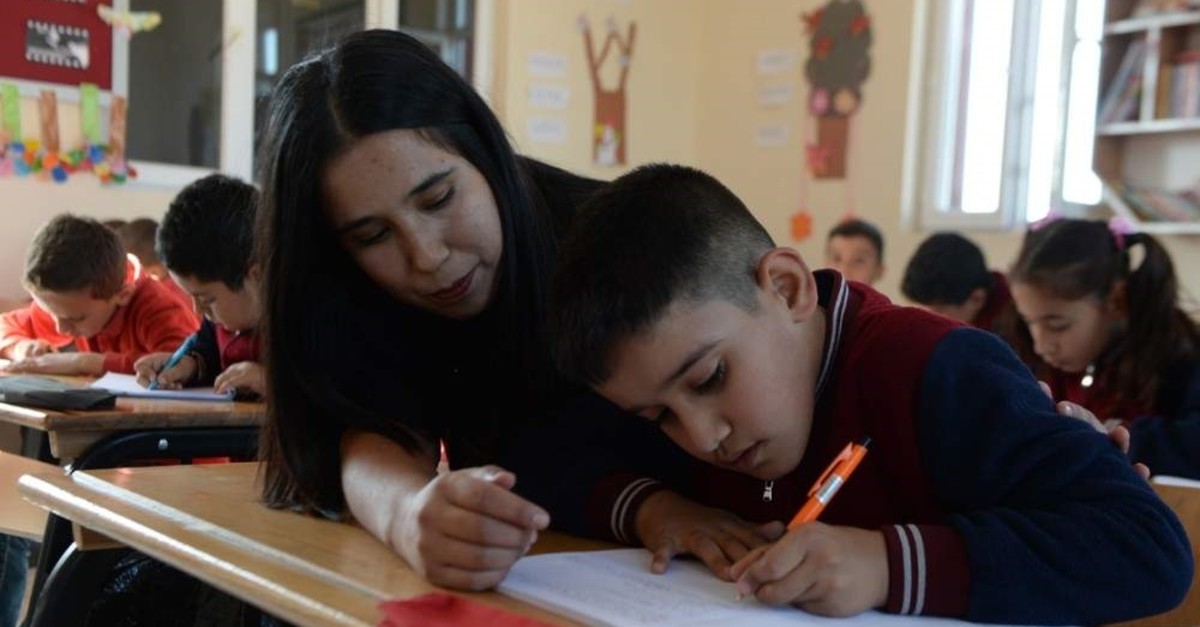 Teachers working in schools along the border in southeastern Turkey have breathed a sigh of relief thanks to Turkey's counterterrorism efforts, continue teaching classes. (AA Photo)
by Daily Sabah Nov 20, 2019 2:59 pm

Teachers working in schools along the border in southeastern Turkey have not been deterred from teaching classes despite terror incidents in the area. The teachers have in fact breathed a sigh of relief thanks to Turkey's counterterrorism operations which have eliminated terror threats from across the border.

Kindergarten teacher Fatma Duman who was assigned to a school in the Gözkaya village in southeastern Kilis province on the Turkish-Syrian border in 2016 told Anadolu Agency (AA) that there are, of course, some difficulties of working at a school located on the border.

“We had doubts when we first came here. We had difficult days but thanks to Operation Olive Branch we had some respite,” Duman said.

Duman noted that during the counterterrorism operations across the border they sometimes heard voices that would scare the children and thus tried to distract children with several methods, adding that they sometimes listened to music and danced together to reassure the students.

“Those were difficult times but thanks to our army we have overcome them,” she added.

İlknur Karagöz, who is a class teacher at the Ekincik Primary School along the Syrian border town of Azaz told AA that she came to the village with great excitement four years ago.

"I opened the door of the school trembling with excitement. I am still very happy to be able to work with the same excitement." Karagöz said.

Similar to Duman’s statements, Karagöz asserted that they had difficult times before but thanks to the recent operations she and her students are feeling safe and continue their education as normal.

“The task of us the teachers is to continue teaching, even in difficult conditions. We do this very well with our students in every situation,” she added.

Karagöz also said that they, as teachers, not only impart education in these schools but also do whatever is necessary, such as repairing school buildings.

Saying that since the village school was old and there were some physical deficiencies such as leaks due to heavy rains, Karagöz said that they tried to fix these problems.

“We valued this place like we value our home,” she said.

Sibel Özay, another school teacher who works in a school in the Hisar village along Syria’s Afrin province said that her students respect and love the soldiers whose presence had increased during the operations.

Özay noted that they have also established a library within the school with books they collected via a social media campaign. The library was named after Gendarmerie Staff Sgt. Abdullah Taha Koç who was martyred during the counterterrorism operations, she added.

The PKK, listed as a terrorist organization by Turkey, the U.S. and the European Union, has waged a terror campaign against Turkey for more than 30 years, resulting in the deaths of nearly 40,000 people, including women, children and infants.