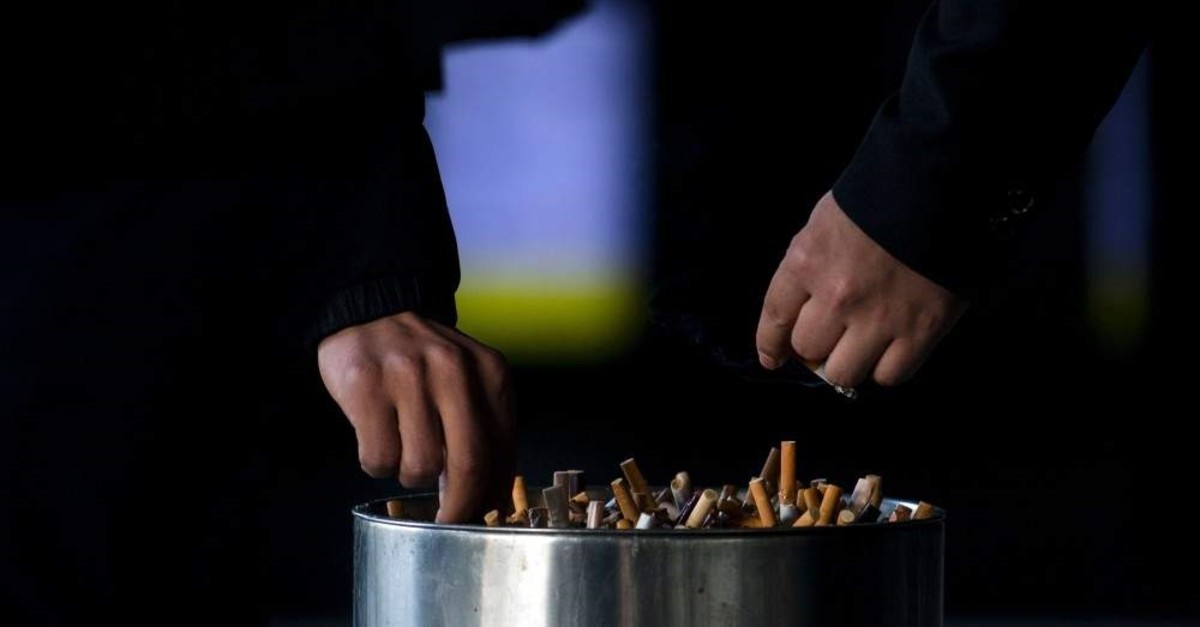 Smoking rates are on the decline across Turkey with ever-growing efforts, yet the harmful addiction is still a serious health issue along with its economic burden. (AFP Photo)
by Daily Sabah Nov 20, 2019 6:49 pm

Despite major wins in the fight against smoking, the deadly habit still incurs a heavy toll on Turkey's health and economy

Smoking rates are on the decline across Turkey, yet the deadly addiction still takes a heavy toll, with Turkey spending a whopping $25 billion annually on smoking, either in terms of the tobacco itself or treating the diseases it causes, experts warned as the nation marked No Smoking Day.

Underlining the fact that a person dies every six seconds due to smoking-related illnesses, Dr. Mustafa Aydın said lung cancer was the most common and deadly result of smoking. “The past 50 years of research have shown us that smoking is the leading cause of lung cancer at an 85% rate. A smoker is 10 to 15 times likelier to contract lung cancer compared to a non-smoker,” Aydın said, adding that the risk of lung cancer decreases over time after quitting, reaching zero after 15 years.

Hailing the government’s regulations to fight smoking a step in the right direction, Aydın urged further measures, including increased taxes for smokers. “It is not fair. When someone smokes, they receive funds for their treatment, funds that could be used for unpreventable diseases. If they wish to continue smoking, they should contribute more,” he said.

According to Aydın, the number of smokers decreased by 30 million in 1999 to around 20 million in 2018, despite a population increase.

Experts also warned against another deadly illness caused by smoking, chronic obstructive pulmonary disease (COPD), which often goes undiagnosed, but is considered the third-deadliest disease in the world.

Professor Doctor Osman Nuri Hatipoğlu said that the COPD causes 2.9 million deaths annually, adding that the respiratory diseases constitute the 3rd most common cause behind the deaths in Turkey - some 61.5% of such diseases diagnosed as COPD.

The ruling Justice and Development Party (AK Party) government has initiated various steps to halt cigarette use, starting with their taking the office. The country introduced a nationwide indoor smoking ban in 2009 at restaurants, bars and similar establishments and gradually extended its reach to other enclosed spaces over the years, in addition to a complete smoking ban on school grounds and sale of tobacco products at educational facilities.

Authorities have stepped up inspections against violations of the smoking ban in recent years. Some 1,500 teams inspected businesses and public buildings around the country on a daily basis to check against violations of the ban. The Health Ministry also set up a hotline for citizens to report violations, while an app called Green Detector allows users to immediately notify authorities of persons and venues failing to uphold the measures. Since 2009, teams have carried out more than 22.8 million inspections. The Health Ministry also offers advice to those trying to quit, through a hotline set up in 2010. The hotline receives about 5,000 calls every day from smokers. A ministry website also gives tips on how to quit smoking and allows users to calculate how much money they can save by not buying cigarettes. Figures indicate that since the smoking ban has been installed, the prevalence of smokers has decreased. Increased taxes on cigarettes and free medical treatment for smokers seeking to quit has aided its decline.

Turkey also introduced a new regulation earlier this year for plain packaging to deter would-be smokers in particular. Under the regulation, which comes into force next year, tobacco product packages will no longer bear oversized logos, symbols or signs belonging to brands, save for fine print for each. Instead, cigarette packs will be largely covered by health warnings about the dangers of smoking.