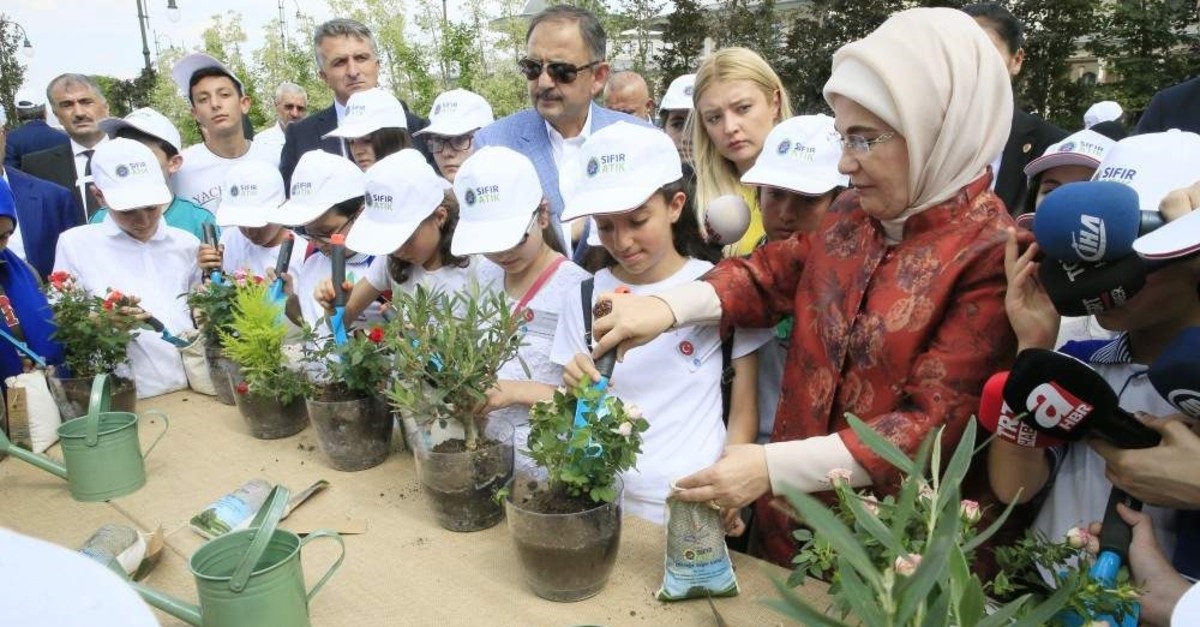 First lady Emine Erdo?an puts compost made of recycled material to plants at an event at the Presidential Complex, Ankara, June 5, 2018. (COURTESY OF TURKISH PRESIDENCY)
by Daily Sabah with AA Nov 24, 2019 5:33 pm

The Presidential Complex is almost ground zero, so to speak, for an ambitious Zero Waste Project aiming to spread recycling across the country. The residence of first lady Emine Erdoğan – the main patron of the project, which was launched in 2017 – is now equipped for multitiered recycling practice that aims to minimize, and ultimately eliminate, waste. From more energy efficient lighting to a ban on single-use plastics, the complex, in the capital Ankara, manages to significantly reduce waste, setting a strong example in a nation gradually becoming aware of the devastating impact of waste and a lack of recycling practices.
Emine Erdoğan launched the campaign in cooperation with the Ministry of Environment and Urban Development, beginning with an overhaul of the waste management of the Presidential Complex, before spreading these practices to other public institutions, such as ministries, schools, hospitals and the armed forces.
Staff at the Presidential Complex were quick to adopt the zero-waste practices, thanks to a detailed road map aiming to curb and ultimately, eliminate waste was introduced. The road map included the training of personnel and making available containers to sort waste, from paper to plastic bottles on every level and in the kitchens of the complex. As a first step, traditional garbage bins were removed from under every desk. Instead, garbage collection bins for plastic, paper etc. were placed on every floor, in shared spaces. In areas designated for dining, containers marked “recyclable,” “organic” and “other” waste were placed in order to sort uneaten food and similar materials. Food waste is being used to feed stray animals, while package waste is to be sent out for recycling. Meanwhile, waste from all kitchens, halls, and canteens inside the sprawling complex now serve as a main source of compost, used to fertilize plants in flowers of the surrounding gardens.
Complex staff are also now charged with collecting every item that can be reused and recycled, from medicine to electronic devices, plastic items, batteries, power generator fuel, cooking oil and unusable textiles, and sending them for recycling. A branch of complex administration is entirely devoted to overseeing zero waste practices while voluntary staff aid in supervising the practices.
For energy efficiency, the Presidency has also taken a series of steps to save water and electricity. For instance, limited lighting practices have been implemented to coincide with lunch breaks and at the end of shifts in the evening. Offices with no personnel for a predefined time have their lights automatically switched off. For greater efficiency in water use, the pressure of every faucet has been reduced, while staff have implemented greywater and rainwater collection systems for further savings. Furthermore, to clean the enormous building, eco-friendly cleaning products are now in use.
Single-use plastic and paper cups have been removed from use, with staff, in return, being given personal mugs with their names on them. Plastic water bottles have also been replaced with glass ones.
Over the course of 23 months, efforts at the Presidential Complex have saved around 153 tons of recyclable waste. So far, 72 tons of paper have been saved for recycling; equal to 1,225 trees. With recycling of glass, plastic and metal waste, the complex has further saved 45 tons of raw materials. Overall, energy costs equal to 567,538 kilowatts per hour electricity, 2,200 cubic meters of water and 1,300 cubic meters of storage space have been saved, too, with greenhouse gas emission was reduced 16,8 tons.
MORE THAN TL 150 BILLION FOR ENVIRONMENT
Money spent on waste and wastewater management has exceeded to account for 85.5% of total environmental protection costs over the last five years. Turkey has ramped up efforts to increase this in recent years, however. From 2014 to 2018, environmental protection spending surpassed TL 150 billion. Turkey spent TL 12.4 billion in 2014 for waste management. By the end of last year, this figure had increased by 46%, reaching TL 18.1 billion. In five years, TL 73.6 billion spent for waste management, almost half of environmental protection costs. For wastewater management, TL 54.7 billion was spent.
Turkey spent a further TL 8.8 billion to protect biodiversity over the past five years and another TL 4.8 billion for the preservation of underground waters and soil.
TL 841 million has also been allocated over the past five years to fund research and development work to better protect the environment.
Muhammet Saraç, head of nonprofit Waste and Environment Management Association (TAYÇED) told Anadolu Agency (AA) that the figures show increasing awareness about the environment in Turkey. “It is good that spending increases are focusing on matters regarding climate change. I believe these efforts will increase further thanks to this Zero Waste Project,” he said.
Last Update: Dec 20, 2019 1:53 am
RELATED TOPICS