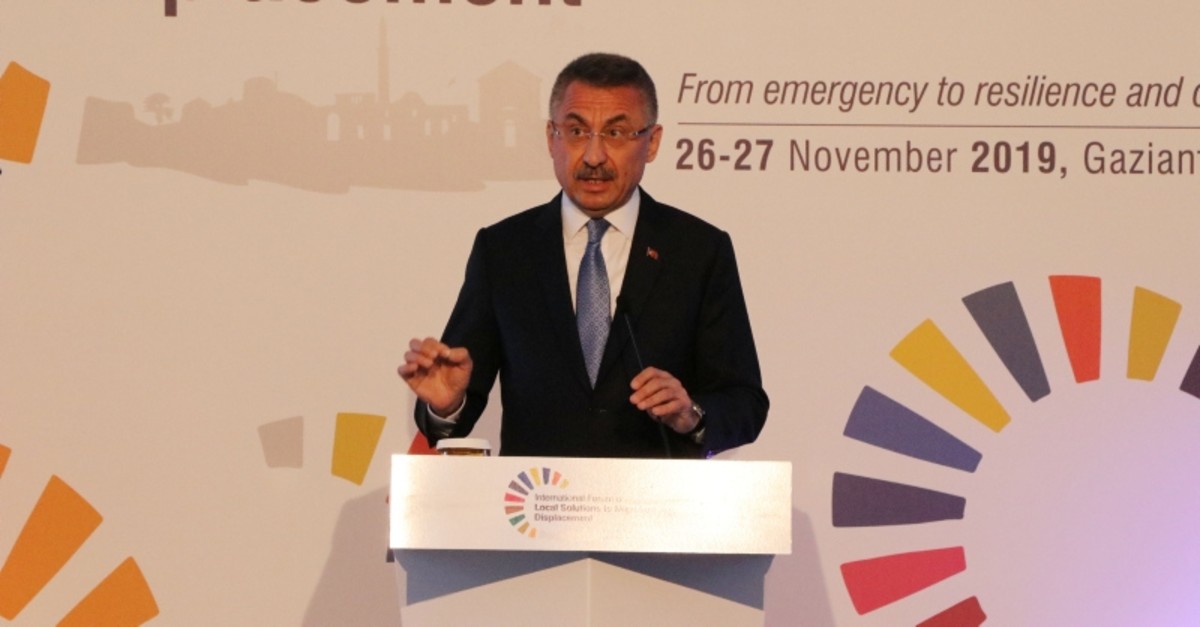 Vice President Fuat Oktay announced on Tuesday that around 370,000 Syrian refugees resettled in areas in their country that have been liberated from terrorists, adding Turkey's spending for refugees exceeded $40 billion

Turkey’s efforts helped around 370,000 Syrians return home from Turkey to areas liberated from terrorist control, Turkish Vice President Fuat Oktay announced on Tuesday. Addressing the International Forum on Local Solutions to Migration and Displacement in the southern province of Gaziantep, Oktay said Turkey’s spending for the welfare of refugees also exceeded $40 billion.
"We are putting all services, especially in areas of security, health, education and shelter, road, water and electricity, for the use of Syrians without any discrimination," Oktay said.
He reiterated that Ankara is determined to form a peace corridor in Syria regardless of foreign support. Oktay highlighted that Turkey's anti-terror operations formed safe areas in Syria and helped the normalization of life in those areas.
Operation Euphrates Shield and its successors Operation Olive Branch and Operation Peace Spring all aim to eliminate terrorist elements near Turkey's borders, including Daesh and the People's Protection Units (YPG), an affiliate of the PKK terrorist group. Ankara wants to clear northern Syria east of the Euphrates River of the YPG.
Oktay also lamented that the European Union, despite its pledges for more support, gave only 3 billion euros since 2016 for the care of refugees in Turkey. Turkey currently hosts over 3.6 million refugees from Syria, the largest amount in the world. Another 62,578 refugees live in temporary accommodation centers set up in cities near the border with Syria, including Gaziantep. The vice president, who once served as head of Disaster and Emergency Management Authority (AFAD) that oversees refugee camps, said Turkey implemented exemplary practices for the care of refugees. He noted Turkey was the only country to take concrete steps for the return of refugees to their homeland.
After the Syrian civil war broke out in 2011, Turkey adopted an "open-door policy" toward Syrians fleeing the conflict, granting them "temporary protection" status. Since then, Turkey has received a constant flow of displaced Syrians fleeing the conflict and their numbers have expanded from mere thousands to millions.
“Just as we did in the west of the Euphrates where we reopened schools, churches and mosques and reinforced infrastructure, we will make the east of Euphrates a place of peace and security, with infrastructure services. We work both to maintain our border security with our fight against Daesh and the YPG and to establish a peaceful region where refugees can live in their own countries,” he said.
Sharing a 911-kilometer border with its southern neighbor, Turkey has repeatedly proposed establishing a safe zone in northern Syria to stop further refugee influxes into its own territory and into Europe, and to relocate Syrians living in migrant camps in Turkey while providing conditions allowing others to return.
Oktay said they mobilized all resources for refugees in more than eight years but the care of refugees and their integration needed “multi-dimensional solutions with more than one actor,” pointing to the European Union.
“Unless the European Union and international institutions provide the amount they pledged, any one country cannot shoulder the burden alone. Turkey should not be viewed as the only country responsible to respond to this tragedy just because it is close to [Syria]. Based on the principle of a fair share of burden and responsibility, we expect the international community to act, not to advise us. All parties of the global treaty on refugees should answer the questions of what their responsibilities are and how they should undertake it instead of seeking answers on what should be done,” he said.
Last Update: Dec 20, 2019 1:57 am
RELATED TOPICS