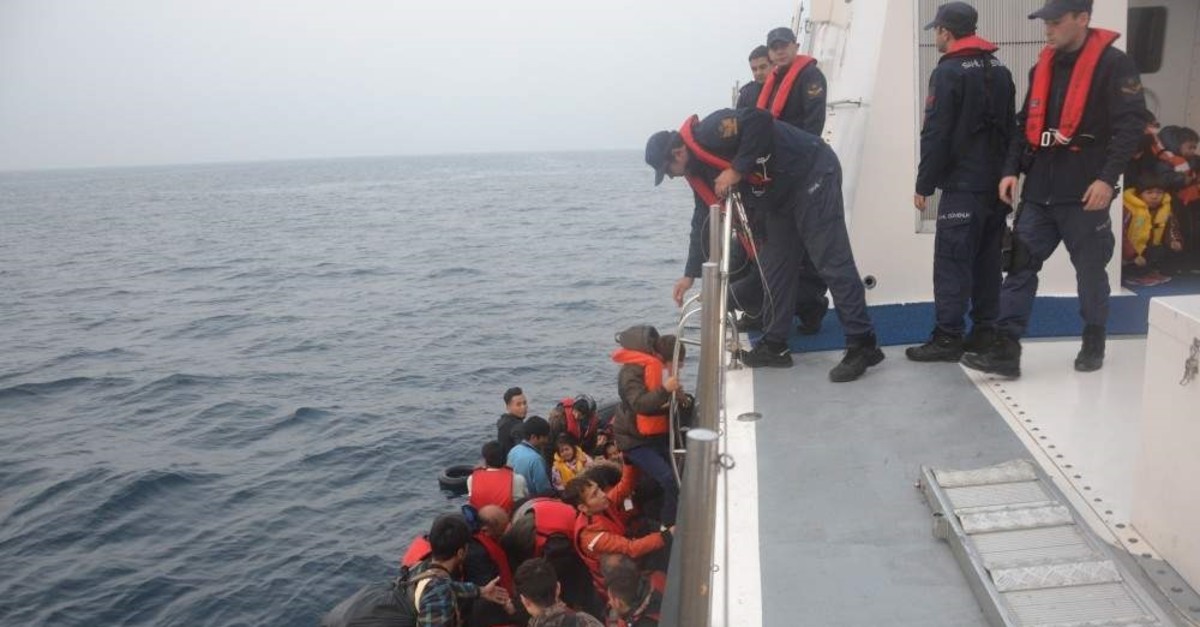 The Turkish Coast Guard pulls migrants into their boat in this undated photo taken off the western coast of Bal?kesir province. (?HA Photo)
by Daily Sabah with IHA Nov 27, 2019 6:23 pm

Turkey's resolute stance to stop illegal immigration via the Aegean Sea prevails amid the continuous flow of migrants into Greece. More than 55,000 illegal immigrants were intercepted on this route alone this year


Illegal immigration from third countries into Greece via Turkey is thriving. So are the efforts by the Turkish Coast Guard patrolling the lengthy Aegean coast against illegal immigrants. Since the beginning of this year, 55,806 illegal immigrants were intercepted by authorities.
Figures by the Turkish Coast Guard Command shows troops patrolling the sea intervened in 1,615 cases of mass illegal immigration. According to data, 33 migrants died en route to Greece due to accidents. Authorities also arrested 76 human smugglers between January 2019 and November.
The Turkish Coast Guard, accompanied by aircraft and helicopters, comb the sea and shores for illegal migration attempts that have multiplied in the past years.
Turkey has been a key transit point for illegal migrants aiming to cross to Europe to start new lives, especially those fleeing war and persecution. Every year, hundreds of thousands of migrants flee civil conflict or economic hardship in their home countries with the hope of reaching Europe. Some migrants are able to make the dangerous journey over land or sea with the assistance of smugglers, who often abandon them, especially during sea journeys, after receiving thousands of dollars from each migrant. Others are stopped by Turkish security forces before crossing the border into Europe, at sea or along the land borders. More than 90,000 illegal migrants were intercepted near Turkey’s land border with Greece in northwestern Edirne province so far this year.
Last week alone, more than 3,700 illegal migrants were intercepted across the country, 1,475 of them in Edirne. More than 1,500 others were stopped in Muğla, Çanakkale, Izmir, Balıkesir, Mersin and Aydın, provinces littoral to the Aegean and Mediterranean Seas. Last year, some 268,000 illegal migrants were held in Turkey, according to the Interior Ministry. Nearly 337,000 irregular migrants have been held in 2019 so far all across the country.
Turkey and the European Union signed an agreement in 2016 to find a solution to the influx of refugees heading to the union. According to the deal, Turkey was promised 6 billion euros ($6.63 billion) in financial aid, which was initially designed to be given to the country in two stages and be used by the Turkish government to finance projects for Syrian refugees. Visa-free travel for Turkish citizens was also to be provided under the agreement. Finally, the customs union was to be updated in accordance with the deal. For its part, Turkey took the responsibility of discouraging irregular migration through the Aegean Sea by taking stricter measures against human traffickers and improving the conditions of the more than 3.5 million Syrians living in Turkey.
Despite significant developments in the control of migration traffic, the EU has not delivered on its commitments. European countries often bicker over how many migrants each should take in while the popularity of far-right movements grows in parallel with increasing xenophobia. Greece is the closest gateway for migrants traveling from Turkey but failure to accommodate migrants in better conditions and a controversial "pushback" practice where migrants were allegedly beaten and forced to walk back to the Turkish side of the border remain serious concerns.
Last Update: Dec 20, 2019 1:58 am
RELATED TOPICS