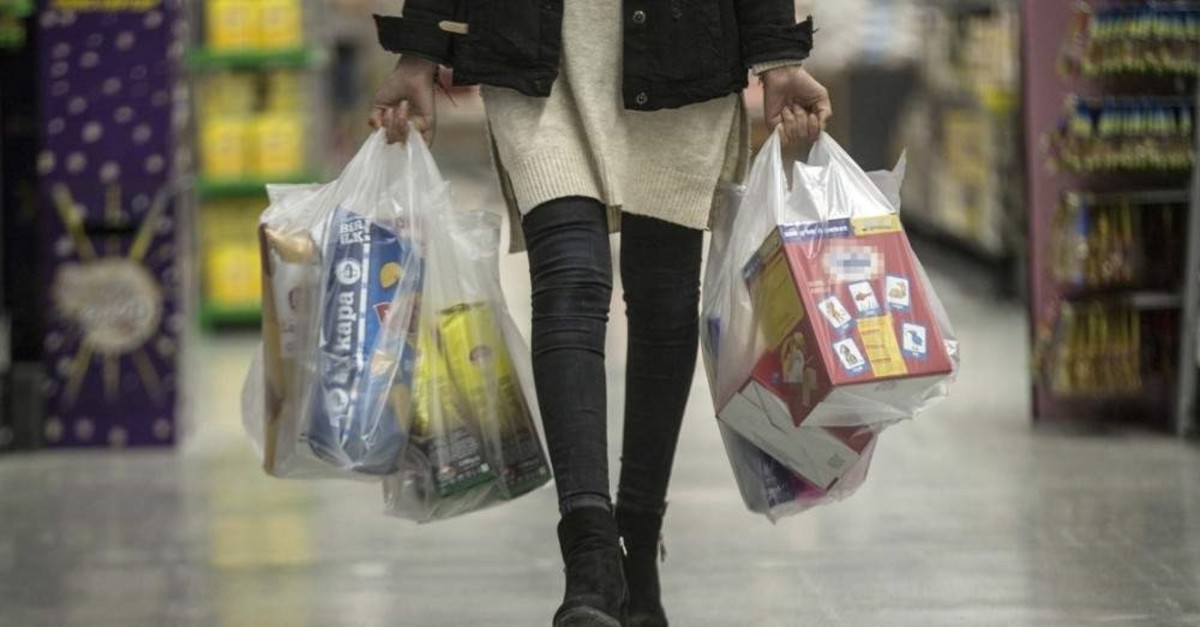 According to authorities, some 150,000 tons of plastic were saved in the 11-month period after the government initiated a new regulation to halt plastic use. (AA Photo)
by Daily Sabah with AA Dec 15, 2019 6:59 pm

Plastic bag use significantly dropped in Turkey as some 150,000 tons of plastic waste was prevented in 11 months with the government's new regulation

The use of plastic bags has significantly dropped in Turkey since a new regulation was introduced in January. According to authorities, some 150,000 tons of plastic were saved in the 11-month period.

As part of the country's fight against plastic pollution, the government enacted a regulation that ordered customers to pay at least TL 0.25 for a plastic bag in hopes to curb excessive use.

The prevention of 150,000 tons of plastic use has contributed to a cut of approximately 6,000 tons of greenhouse gas emissions.

Plastic bag use per person was 440 annually in Turkey and about 30-35 billion plastic bags were used in the country yearly. An estimated 5 trillion plastic bags are used worldwide every year, and they mainly contribute to maritime pollution as some 8 million tons of plastic including bags are dumped into the ocean every year, killing marine life and entering the human food chain, according to a United Nations report on the issue.

With the new regulation, the use of plastic bags fell by 77.27% and the number of bags per person, which was about 35 per month before, decreased to 10.

The Minister of Environment and Urbanization officials had carried out audits throughout the country, while markets and plastic bag manufacturers that do not follow the rules were fined a total of TL 121,411.

Plastic bags take up to 800 years to completely dissolve to a point where they do not pose a threat to the environment.

Meanwhile, the ministry has decided not to raise the sales prices of plastic bags for 2020, taking into account the opinion of the relevant sector representatives. Though low, the price of plastic bags has led consumers to seek other means to carry the goods they purchase, with some municipalities distributing free canvas bags for shoppers.

According to the new regulation, the bags in duty-free shops are free along with the bags used in wholesale or retail sales of products such as textiles, toys, electronics, bakery products, clothing, food in markets, groceries, canteens, cafes, restaurants, and similar stores.

Furthermore, as a next step to halt plastic bag use, effectively collect plastic, glass and metal beverage packaging wastes as well as to provide quality raw material to the industry, the ministry will implement a “deposit application” initiative, which will be mandatory as of January 2020.

The application is expected to create additional employment opportunities along with economic and environmental benefits.

A protocol was also signed between the government and Istanbul Technical University to clarify the details of the deposit application for beverage packages and to make it a Public-Private Partnership model.

Nearly 50 billion packages for the beverages are launched annually in Turkey. Efforts to collect beverage packages from consumers and store, transport and recycle them are also continuing.

Plastic bag restrictions were part of the larger "zero waste" project initiated two years ago by first lady Emine Erdoğan. Some 14,000 public institutions, from the presidential complex to ministries and their branches are integrated into the project which covers recycling of waste, sorting the waste at its source and recycling food waste to compost. The campaign helped Turkey to rediscover its potential to be a more eco-friendly country, despite heavy industrialization in recent years. The ensuing recycling drive saw zero waste collection areas set up in more places, from shopping malls to businesses, schools, hotels, airports and et cetera.

The drive saved more than 30 million trees between 2017 and 2018, with the recycling of more than 1.7 million tons of paper waste and cartons. Meanwhile, more cities are upgrading their waste management systems. Under a new draft bill, every business or public institution will be required to receive a zero-waste certificate that will evaluate how it complies with the new policies. The bill also makes it mandatory for municipalities to set up facilities for the collection of waste separated at its source.