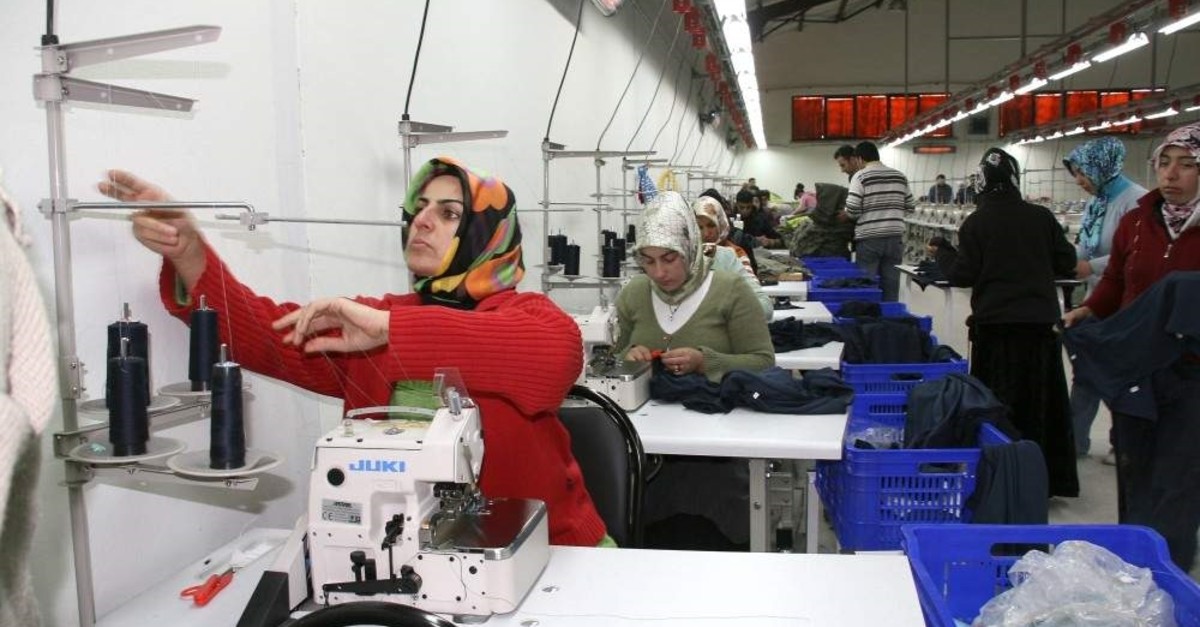 Women work at a textile factory in Batman in this undated photo. (AA Photo)
by Daily Sabah with Agencies Dec 24, 2019 3:36 pm

Women in Turkey continue earning less than men, a new survey shows. The Turkish Statistical Institute (TurkStat) revealed the findings of the 2018 Structure of Earnings survey on Tuesday and said the estimated annual average gross earnings for men was TL 50,297 while it was TL 46,208 for women. The average earning for employee of any gender was TL 49,001.

The most recent findings of the survey carried out every four years was TL 55,633 for men and TL 45,483 for women who had high education levels, such as university graduates and those who pursued postgraduate studies.

Turkey, like the rest of the world, strives to close the pay gap between men and women, as well as including more women into the workforce. The Gender Parity report by the World Economic Forum (WEF) for 2019 said women need to wait 257 years to accomplish full equality in economic participation. According to the WEF report, only 55% of adult women are in the labor market, versus 78% of men, while over 40% of the wage gap – the ratio of the wage of a woman to that of a man in a similar position – and over 50% of the income gap – the ratio of the total wage and non-wage income of women to that of men – are still to be bridged.

The TurkStat survey said the earnings of employees demonstrated an increase as the level of educational attainment advanced. The highest earnings were obtained in the group of employees with higher education, specified as university degrees and higher. It was TL 78,041 for men and TL 62,051 for women in that group.

The highest-paid sectors were the information and communications sector according to TurkStat, with annual average gross earnings of TL 100,467. It was followed by the finance and insurance sectors. The lowest-earning jobs were in the accommodation and food services sector, at TL 35,172, followed with support services.

The survey was carried out in 16,674 workplaces. TurkStat said women made up 31.7% of employees in economic activities.

Gender equality and affirmative action for women are high on the government's agenda. In his party's manifesto ahead of the June 24 elections, President Recep Tayyip Erdoğan pledged to end "every tradition of the age of ignorance targeting women."

The Ministry of Family and Social Justice already works to empower women with projects to improve gender equality for women, which have lagged behind men in every field, courtesy of a patriarchal mindset.

In recent years, the government rolled out a series of incentives for working women, from longer maternity leaves to financial support for daycare needs, as well as payments to grandparents caring for their grandchildren who have working parents.

The government set the bar higher to increase the employment rate to at least 41% in the near future and decrease illegal labor by women to at most 30%. As for female entrepreneurs, the government plans to extend loans to more women willing to set up their own business. Women are already provided up to TL 50,000 in loans.