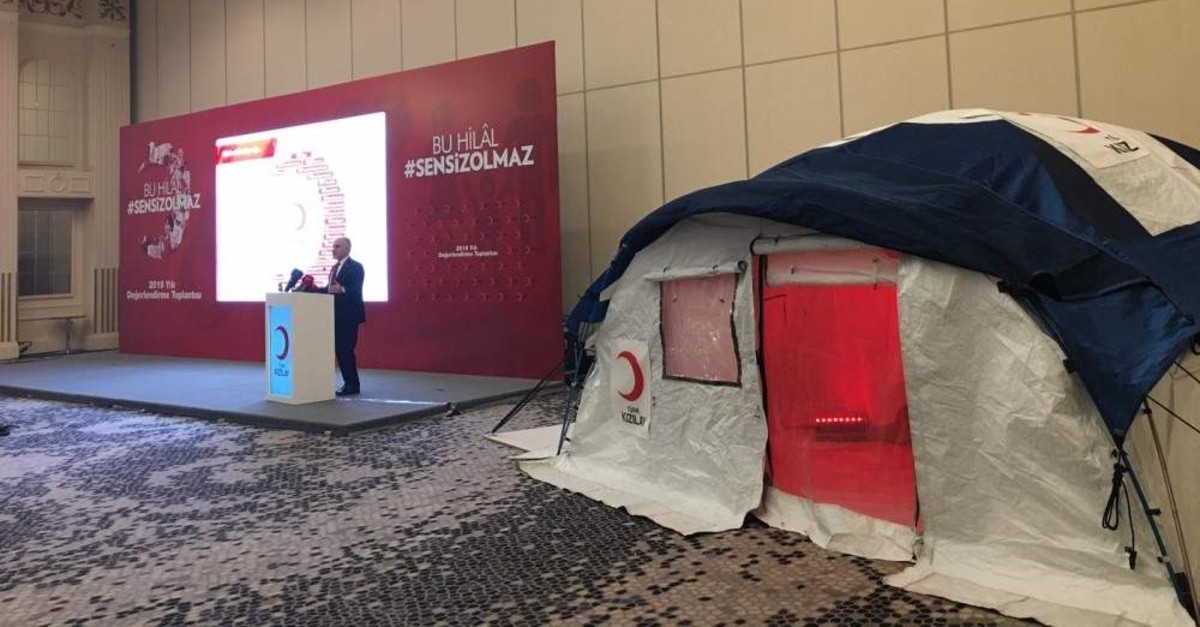 The country's flagship humanitarian organization, the Turkish Red Crescent, rolled out new plans to reach out to more people, along with a new tent that is durable in varied climate conditions

Turkey's leading charity, the Turkish Red Crescent stepped up to the plate for humanitarian assistance across the world. Red Crescent President Kerem Kınık gave a summary of their 2019 activities and explained their plans for 2020 at a press conference in Istanbul on Wednesday. Kınık also unveiled a new "geodesic" tent they produced, a lighter but more durable version of the standard tent the charity manufactures.

The charity, founded 150 years ago, has been at the forefront of humanitarian aid in Turkey and the world since then and delivered aid to 22.3 million people in 2019. In 2020, it aims to reach 25 million people. It will also launch a campaign titled, "Society-Based Disaster Management and Training Mobilization." The Red Crescent is looking to collect at least TL 1.2 billion from its donors in 2020.

Kınık, who was appointed as Red Crescent president in 2016, said they empowered their "army of humanitarian aid." "We have 158 branches, nine regional disaster operations centers, 174 office of representations, 20 local disaster operation centers, tens of thousands of members, 18 regional centers for blood donations, 120,000 volunteers, 68 blood donation centers, 152 university communities, 16 social centers and a staff of 10,257 people. We have soup kitchens, nursing homes, dormitories, hospitals and shops to give away clothes for free for the needy and countless other services. In 2018, we reached out to 21.2 million people thanks to donations and this rose to 22.3 million this year. We target to increase it to 25 million in 2020," he said.

The charity will also restructure its scholarship scheme for students under the name of Red Crescent Scholarships. Last year, it distributed TL 19.6 million to more than 22,000 students and next year, it will deliver TL 40 million for 10,000 students. Kerem Kınık said the scholarships cover universities but they will reach out to high school students in the coming years. The charity will also assist 100,000 families with school-age children to cover education costs.

"We plan to deliver education aid worth TL 7 million next year," Kınık said.

It will invest about TL 130 million in education aid, including setting up classrooms for special education students.

Although its humanitarian outreach expanded in recent years, the Red Crescent's main activities have been responding to natural disasters. Kınık said next year will see them concentrating on society-based disaster management and training people for disaster response.

"We will also boost our logistics capacity for disaster response. Along with aid depots here, we will have two storage facilities for aid in the Turkish Republic of Northern Cyprus and Georgia," Kınık said.

The Red Crescent currently runs two such facilities in Sofia, Bulgaria and Irbil, Iraq. The charity, with tents and housing units, has a capacity to accommodate about 200,000 people in case of disasters and displacement. An additional 75,000 units will be added to this capacity soon.

As for its international activities, the Red Crescent maintains 15 permanent delegations abroad and aims to increase it to 19 countries in 2020.

"We will set up permanent delegations in Ethiopia, Libya, West Africa and Central Asia. We were active in 71 countries this year and reached out to 7.9 million people. Next year, we want to give what our nation donated us to 8.5 million people in 81 countries," he said.

Kınık noted that since 2011, the Red Crescent has been active in helping displaced Syrians who sought shelter in Turkey after fleeing the civil war in their country.

"We distributed aid worth TL 296 million, from tents to blankets, from hygiene kits to clothes to our guests in Turkey and those internally displaced in Syria since 2011. We delivered about 50,000 truckloads of aid to Syria and the cost of aid we delivered exceeded TL 5.7 billion," he pointed out.

A LIGHTER, BETTER TENT FOR THOSE IN NEED

The Red Crescent unveiled its 22-square-meter new tent at the press conference. The "geodesic" tent which can accommodate five people is an upgraded version of classic tents the Red Crescent has been producing and distributing for victims of natural disasters and conflicts.

"It is made of recyclable textiles and it is lighter compared to other tents.

Our other tents weight about 85 kilos but this one weighs only 48 kilos. It is resistant to severe winter conditions as well as tropical rains," Kınık said, adding that it also costs less to produce.

Kınık said they will be primarily delivered to tropical regions. He added that they also participated in a tender for tent production for the International Organization for Migration. The charity so far delivered 104,000 tents capable of accommodating 700,000 people to war-torn Syria.