From zero to the future: National recycling movement gathers momentum 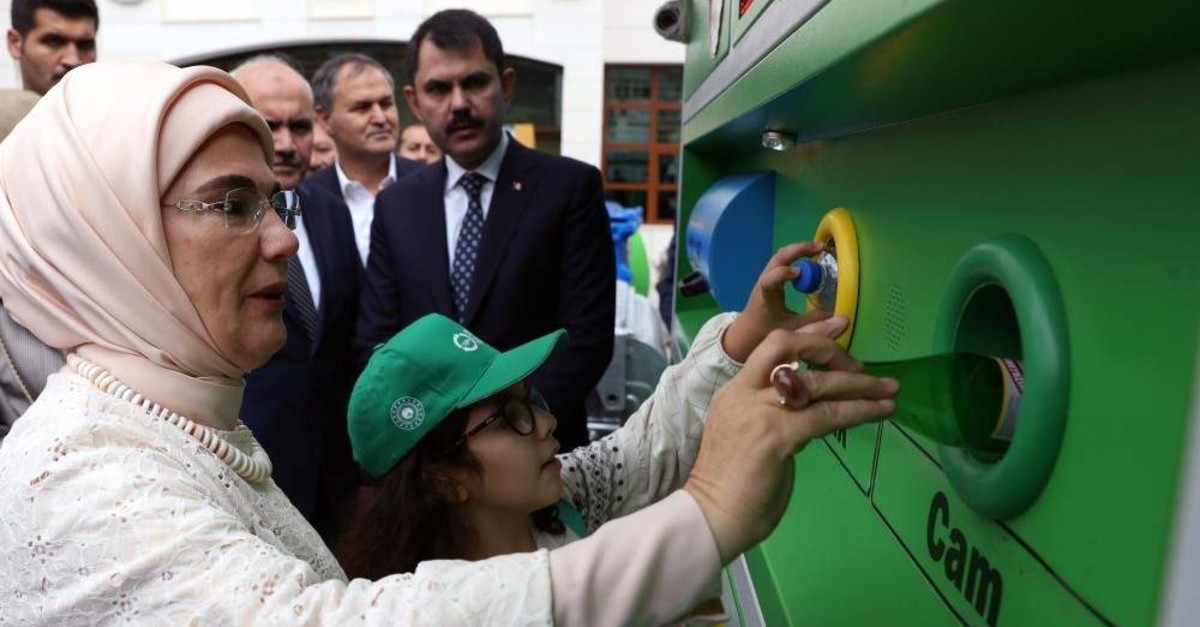 The Zero Waste project, the brainchild of First Lady Emine Erdoğan, has wrapped up its second year having gained much traction. The recycling wave it has sparked across Turkey has led to high hopes that by 2023, the whole country will have gone "Zero-Waste"

Recycling is a concept that is gradually being embraced throughout the world in the face of the threats posed by global warming and pollution; yet, recycling has only found its footing in Turkey thanks to the Zero Waste Project. First Lady Emine Erdoğan has spearheaded efforts to reduce waste to a minimum, and, two years after its inception, the project continues making waves across the country. Turkey has saved tons of plastic and made its seas cleaner, with thousands of buildings, residencies and companies having implemented recycling into their waste disposal policies.

The program aims to promote the efficient use of the planet's finite resources, aiming to curb and even eliminate waste by separating it at the source for recycling. The Zero Waste policy was first launched at the Beştepe Presidential Complex and went into effect at various government ministries over the course of 2017, later spreading to the municipalities and a number of private companies and specific public institutions, including schools to hospitals.

By the end of 2019, 25,000 public buildings had switched to the zero-waste system, with its first proponent, First Lady Erdoğan, having drawn attention to the concept everywhere she has visited, from international events to the United Nations, using these platforms to announce her aim for a comprehensive, nationwide implementation of the project across the whole of Turkey by 2023, a year which marks the centenary of foundation of the country.

Aside from the environmental benefits, the project looks to save the country around TL 20 billion annually and create jobs for 100,000 people by 2023, according to projections. The country seeks to increase its recycling rate from 13% to 35%. Education is certainly a key element to achieving this aim, and so, since its inception, the Zero Waste program has boosted media recognition of the issue and promoted awareness at schools in order to combat the culture of haphazard use of disposable materials and food waste. Today, containers separating paper, metal and glass waste are a common sight in Turkey, which, like many countries, is threatened by the rising amount of plastic pollution.

Professor Mehmet Emin Birpınar, Deputy Minister of Environment and Urbanization, says Turkey has undertaken immense reforms in terms of waste management. Speaking to Daily Sabah, Birpınar said the country had managed to prevent, "to a large extent," the haphazard disposal of the solid waste in natural environments with new storage spaces to both prevent waste that would avert damage to the environment while contributing to the economy by turning waste into energy.

A ban on plastic bags distributed freely everywhere, from supermarkets to department stores, was implemented in January 2019. Businesses now charge TL 0.25 for each bag. The ban has helped reduce the use of plastic bags by at least 77% as many have since turned to taking canvas bags with them to stores.

Zero Waste Blue, the project's maritime wing, also proved effective in mobilizing the public to keep the country's four seas and other bodies of water clean. More than 163,000 cubic meters of waste have been removed from the seas since the Zero Waste Blue was launched early in 2019. More than 30,000 people have been educated and trained on how to prevent and handle maritime pollution, while 760 companies have declared their commitment not to dispose of waste in the seas. Associations of divers are also contributing to the Zero Waste Blue program, holding public events to collect waste from the seas.

The project will continue throughout next year with the opening of various other associated groups. As part of an action plan, warnings will be placed everywhere near the sea, from piers to passenger ferries, beaches, hotels, schools and more, to highlight the issue. Students will be educated on preventing pollution and clean-up campaigns will be organized across the country. Organizers of the project also plan a set of designated "Zero Waste Blue Coastlines" to set examples for what a truly clean coastal area should look like.

Some beaches will also be designated plastic-free, while hotels and ports successful in switching to zero-waste practices will be certified. The project also seeks help from fishermen in keeping the seas clean.

Since 2002, Turkey managed to designate more beaches with "blue flags" to indicate its clean status. While there were only 151 blue-flagged beaches in 2002, the number now stands at 463.

As of January 2020, the government will start to charge manufacturers a Recycling Contribution Fee (GEKAP) in a move to further reduce waste. With the GEKAP, companies will be made to pay a certain fee per kilo, ton or cubic meter of packaging they use for their products. The regulation seeks to reduce the increasing costs of recycling packaging and packaging weights. Fees will cover packaging material which is harmful to the environment if not recycled. Existing regulations impose several obligations on manufacturers in certain sectors, such as the collection and disposal of their products sold on the market; however, the new regulation is expected to be more comprehensive.

In 2021, Turkey will also introduce a bottle deposit scheme that will help increase recycling rates of bottles to at least 35%, up from the current rate of 13%.

Another future step for the Zero Waste project is certifying buildings with a "Zero Waste Certificate," which will allow authorities to monitor all processes in a given building upon the implementation of zero waste practices.

In accordance with the "Zero Waste Regulation" policies put in place by the Ministry of Environment and Urbanization, all public agencies and institutions will be mandated to adopt zero waste practices by June 1, 2020. Municipalities, industrial zones, airports, business centers, ports, shopping malls, schools, hospitals, gas stations and large housing complexes will be mandated to switch to Zero Waste applications by Dec. 31, 2020. In total, some 37 million people will benefit from zero-waste practices by that date.

Along with raising awareness, incentives for encouraging people to recycle has increased. Several companies and local administrations have adopted their own strategies for this. In 2018, for instance, the Istanbul Municipality launched a program that gives bus discounts in exchange for the depositing of bottles, with electronic devices automatically loading travel cards with credits. Since its launch, these "smart" recycling containers have amassed at least 4.1 million bottles, equal to 75,000 kilos. The reverse vending machines feature an electronic interface that is able to recognize and sort waste to be crushed, shredded and stored. By depositing an eligible container, plastic bottles or aluminum waste etc., commuters receive refund credits.

Istanbul produces some of the highest amounts of waste in the country, as Turkey's most populated city with a population of over 15 million people tucked into two small stretches of land divided by a single waterway. The city produces an average of 17,000 tons of domestic waste every day, out of which 6,000 tons are processed in the municipality's garbage collection and recycling centers. One recycled plastic bottle produces enough energy to power a 60-watt light bulb for a few hours.

And it is not just the cities adapting to the Zero-Waste project. The governorate of Kırklareli in northwestern Turkey is set to launch a scheme to encourage recycling in villages. Rural residents of the province will be given "recycling cards," a type of debit card that works with smart garbage containers set up in 39 villages. For each unit of garbage thrown into the containers, villagers will be able to earn points on their cards. The cards will be used for shopping in village grocery stores in exchange for goods. For instance, every five kilos of packaging waste will allow cardholders to buy one free pack of pasta.

In the northern city of Samsun, the municipality runs a first-of-a-kind project for animals. Every day, food waste from public agencies is brought to a facility in the local animal shelter where it is processed for consumption by cats and dogs. The animal feed produced is enough to serve around 1,000 animals. The conversion facility has a capacity to produce 30 kilograms of cat food daily and 150 kilograms of dog food. Excess food is stored in cold depots in the facility for future use for the animal shelter which, some years, accommodates up to around 10,000 animals.

In another example of proactive municipal recycling efforts, the southern city of Mersin's City Hospital, the biggest health facility in the Mediterranean city, has managed to recycle 655 tons of paper waste since it opened in 2017, saving 11,135 trees. The hospital wards are fitted with zero-waste bins, where waste is dumped separately, while hospital staff have all undergone zero waste awareness training.

Along with paper waste, the hospital has managed to save 13 tons of vegetable oil used in meals served to staff and patients, equal to having saved 14.5 million liters of water from oil contamination. The hospital has also saved 2,500 batteries from going to waste. With compost derived from food waste, the hospital also grows flowers in a "zero-waste garden."

Meanwhile, back in Istanbul, Yıldız Technical University has developed its own unique approach to the project. After collecting unused equipment in the university's different departments, the university set up a new laboratory. The equipment, previously inoperable due to high costs, is provided for use by both academics and industrial corporations. The new laboratory now provides 33,000 analyses for various purposes yearly now, up from 1,880. The glass workshop also serves as a place to convert discarded glass bottles into pieces of art.

In Istanbul's Başakşehir district, the municipality has also begun collecting food waste to convert into compost. The compost is then used in parks across the district on the city's European side.