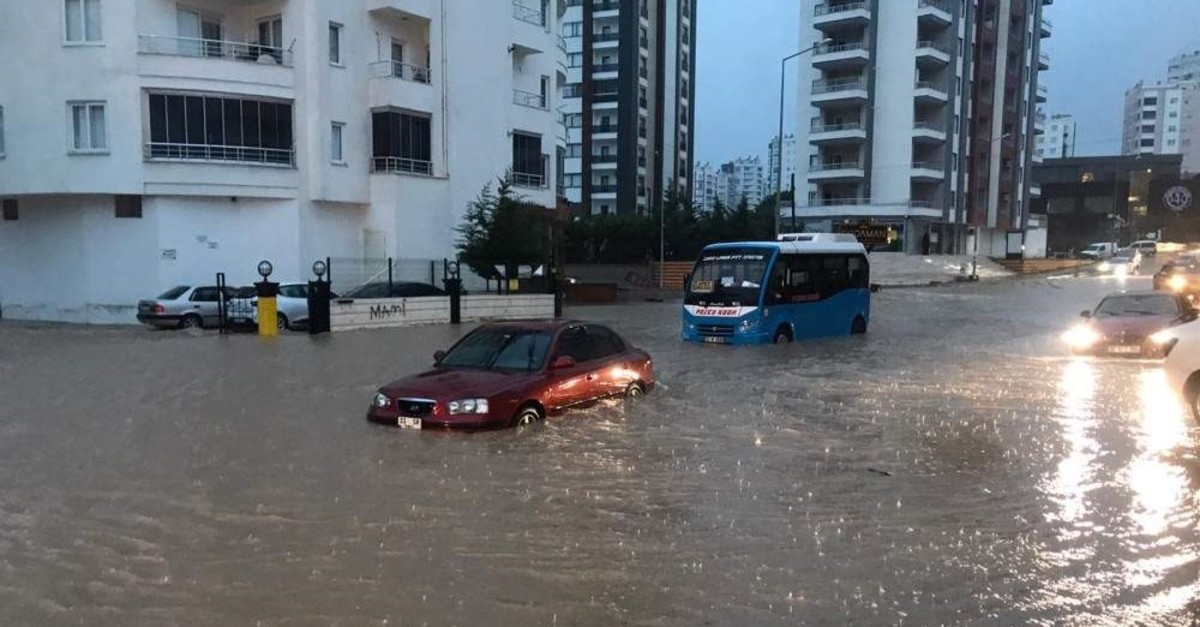 Storms, strong winds and heavy rain have battered Turkey for the past two days, disrupting daily life everywhere from Istanbul to Mersin, where two people were killed in floods

A harsh winter has arrived in full force across Turkey this week with no improvements to the bad weather expected until at least Friday in most regions.

A mix of storms, strong winds, rain and snow took its toll on daily life from the western to the southern regions. In the Mediterranean province of Mersin, two people were killed in floods and landslides.

Turkey's most populated city, Istanbul, had its share of bad weather starting Monday and throughout Tuesday. The city's already congested traffic came to a halt particularly during rush hours as storms and severe rainfall battered the city. Some underpasses were flooded and authorities reported that winds ripped apart the roofs of 108 buildings in the city and led to the collapse of three retaining walls.

Authorities said the city received 100 kilograms per square meter of rainfall on Monday and Tuesday. The districts of Eyüpsultan and Şişli had the most rainfall. Winds of speeds reached 104 kilometers per hour battered the city, leading to daylong cancellations of ferry services between the city's Asian and European sides as well as on routes between Istanbul and other cities. Power cuts briefly disrupted metro services in the city while strong winds slowed down maritime traffic in the Bosporus.

The southern province of Mersin situated on the shores of the Mediterranean Sea was among the places hit by deadly floods. In the Mut district, a 34-year-old man was killed when the car in which he was traveling was caught in floodwaters. His body was found in a river bed Tuesday. He was the second casualty of the disaster. Monday, a 62-year-old man was buried alive when a landslide hit a makeshift house in Mersin's Erdemli district.

Mersin Mayor Vahap Seçer said rainfall and floods disrupted traffic in the province and noted that the city saw rainfall of 140 kilograms per square meter in only 12 hours. Crews worked across the province to drain floodwaters amid dry intervals as the rainfall continued throughout Tuesday. Meteorology authorities had earlier issued a "red warning" for Mersin allocated for only the most severe weather conditions. Floodwaters inundated the province's central districts of Mezitli, Yenişehir, Toroslar and Akdeniz. Eight cargo vessels had to anchor at the province's Taşucu port due to the storms.

Mersin's western neighbor Antalya, a popular resort city for holidaymakers, was also hit by two days of rainfall. In the city's Serik and Gazipaşa districts, floods inundated neighborhoods. Greenhouses, which are plentiful in the city, were also damaged by the floods. Roads in four neighborhoods of Serik were closed down briefly due to floodwaters while locals tried to evacuate their flooded houses. Meanwhile, the main road connecting Antalya to Konya was closed to traffic for 12 hours due to heavy snowfall, before being reopened Tuesday.

The western province of Çanakkale, situated on the northern region of Turkey's Aegean shores, was also affected by rainfall, snowfall and storms. Schools were shut down in the province's six districts Tuesday while the Dardanelles strait was closed for hours to maritime traffic. Strong winds, with speeds reaching 110 kilometers per hour, whipped across the province. Access to Bozcaada and Gökçeada, two islands off of Çanakkale's shores, was cut off for two days due to the storms.

The country's meteorology authority warned that temperatures will remain low Wednesday and Thursday though the weather is expected to improve Friday, at least in the country's western regions.