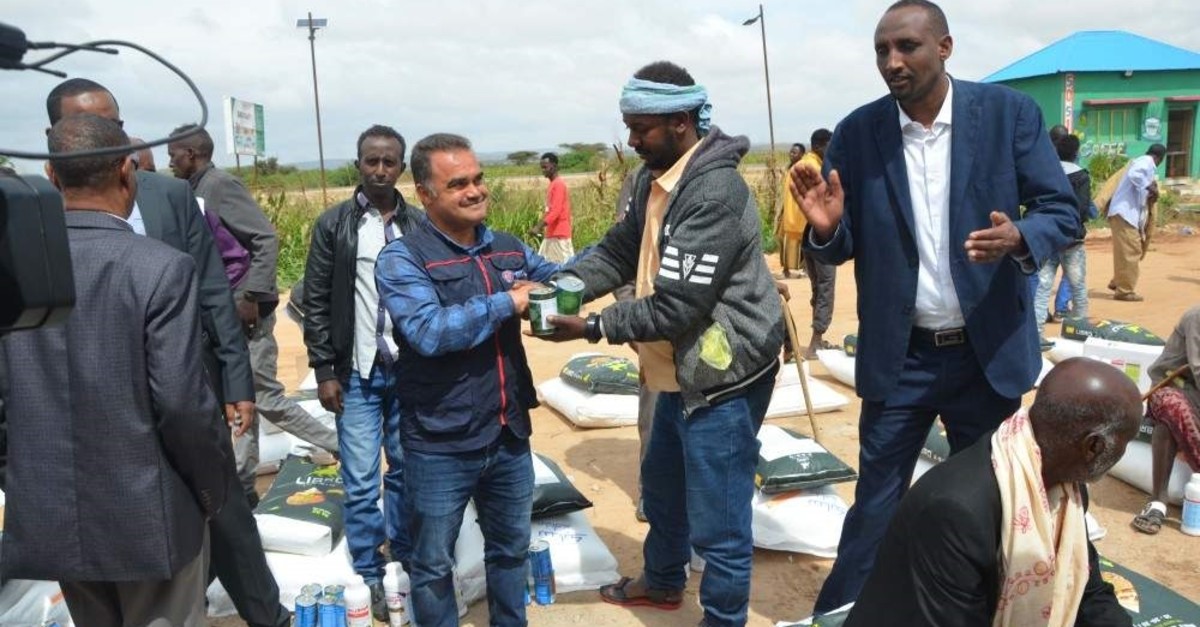 Turkey's development aid agency TIKA launched a project to boost agriculture in Somaliland, covering the training of farmers, delivery of seeds and the modernization of agricultural equipment

Turkish Cooperation and Coordination Agency (TIKA) has reached out to farmers in Somaliland with an agricultural development project.

The recently-launched project aims to boost the quality and amount of crops and livestock in Somaliland, including measures against any threat of future drought.

On Tuesday, TIKA officials delivered 40 kilos of tomatoes, peppers, cabbage and lettuce seeds, along with pesticide and fertilizers, to 100 farmers in Somaliland's vegetable and fruit hub Gabiley. Turkey's Hargeisa Consul-General Ali Noyan Coşkun, TİKA's Somalia Coordinator Galip Yılmaz and Somaliland officials attended the ceremony for the launch of agricultural support. Yılmaz said at the ceremony that he believes farmers will have more profitable production with the support of Turkey and vowed that Turkey would continue supporting the people of Somaliland. Mohamed Mohamud, Gabiley's director of the Ministry of Agricultural Development, thanked TIKA for its support.

In the next stage of the project, TIKA will train farmers on new agricultural methods and provide modern agricultural equipment.

Somaliland's economy largely depends on agriculture and livestock exports. Crop farming is the second major contributor to the state's economy after livestock breeding. The main crops cultivated in Somaliland are sorghum, maize, tomatoes, lettuce, onions, peppers, cabbage, oranges, lemons and papaya. The country's crops suffer from a lack of irrigation and are mostly dependent on rainfall. Limited cultivation and yield force the country to depend on imports from neighboring countries.

Somalia and Somaliland have been kept afloat by aid from Turkey, mostly through development and social projects by TIKA.

Speaking to Anadolu Agency (AA) in a recent interview, Yılmaz noted that Turkish projects in Somalia have changed the country, providing jobs to thousands of Somali citizens and creating a booming economy with many business opportunities. "We have established an agriculture school in (the capital) Mogadishu, and over 400 students across the country are engaged in advanced agricultural studies there," Yılmaz said.

"We also built the most advanced and modern hospital in East Africa in the capital," he said, referring to Recep Tayyip Erdoğan Hospital. He said TIKA has also rehabilitated mosques, schools and roads throughout the country.

The Turkish envoy noted that TIKA recently renovated Somalia's Parliament building in the capital, which was attacked and bombed by al-Shabaab militants in 2014, killing 10 people, including lawmakers. He noted that TİKA reconstructed and furnished the Parliament building. "Our projects include education, health, infrastructure and other development programs, and we (Turkey) will continue to support the Somali̇ people," he added.

Poor transportation systems that had hindered businesses from thriving are now a thing of the past with the new roads that TIKA has constructed.

Aside from beekeeping projects, TIKA has also established 30 orphanage centers across Somalia where orphans live and study.