Anadolu Agency reporter arrives in Turkey after being released by Egypt 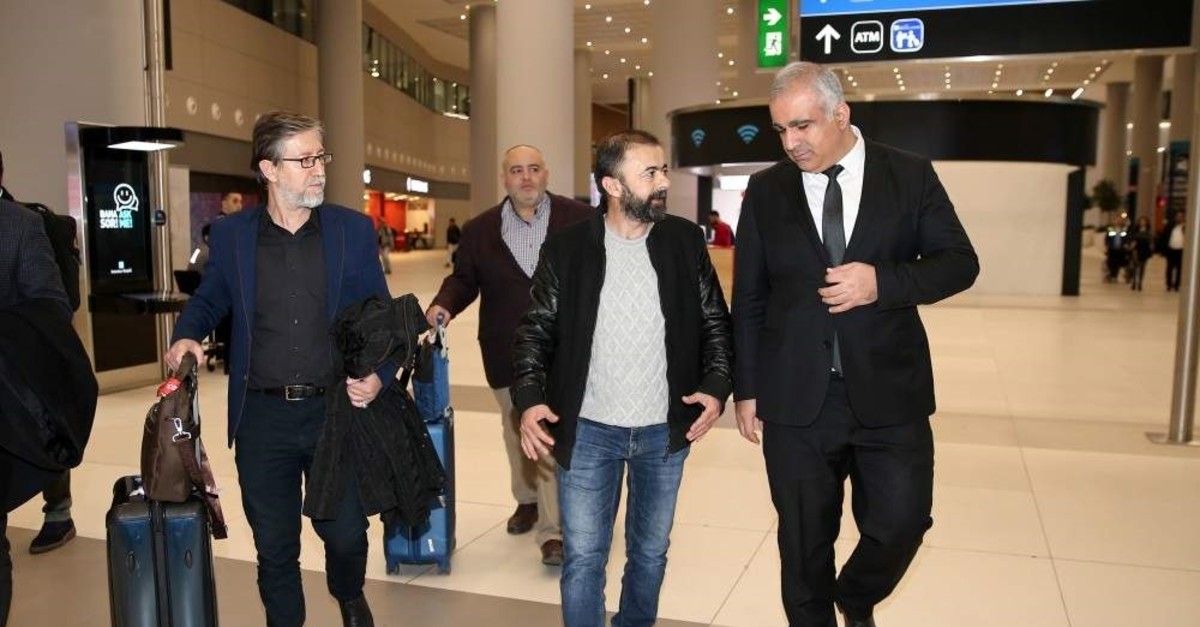 Hilmi Balcı, Anadolu Agency's (AA) freed Turkish employee who was detained along with three others by Egypt earlier this week, arrived back in Turkey on Friday.

AA General Manager Şenol Kazancı announced Hilmi's release Thursday, adding that he expected the others to be released on bail.

Speaking at the airport upon arrival, Balcı said he felt the support of his nation and government while he was held in Egypt. He expressed his gratitude to the Turkish president, foreign minister and communications director, as well as to Kazancı, for their efforts.

Later that day, Balcı recounted the events in detail. Balcı said the incident started at 5 p.m. with the arrival of a three-man squad at the AA office. "They knocked on the door and began asking questions about who we were, what we were doing. They then contacted some others and they arrived as well. Then they started looking around again and again. Later that night, we were taken to an unknown place," he said.

According to Balcı, Egyptian security forces gave no explanation as to why they were detained and just told them that they would have to leave the country after the proceedings were done.

Reminding that three AA employees are still detained, Balcı expressed his wish to see them released as well. "They decided to release them on bail but with Friday being an off day, authorities said their release got delayed to Saturday morning. I hope they will have their freedom as soon as possible," he said.

Egyptian forces Tuesday stormed AA's Cairo office and detained the journalists in a move that drew widespread condemnation from around the world. The detained staff members include Balcı, who is in charge of the office's finance and administrative affairs department, and Egyptian citizens Hussein al-Qabbani and Hussein al-Abbas, and Abdelselam Muhammad.

The country's Interior Ministry said they confiscated cameras and microphones seized in the raid on the agency's Cairo office, claiming the office was spreading the propaganda of the Muslim Brotherhood, which is viewed as a terrorist group by Abdel-Fattah el-Sissi's regime.

Kazancı said a story published in the Egyptian media described the AA office as a "terror cell house" in its headline. Similarly, the Egyptian Interior Ministry shared photos of seized cameras and other materials used for journalism on its Facebook page and claimed that they were "items seized in the cell house," ignoring the fact that the agency was operating legally in the country.

Turkish authorities unequivocally condemned the detentions, calling it a violation of freedom of the press.

Foreign Minister Çavuşoğlu said Wednesday that the raid was "unacceptable," adding that President Recep Tayyip Erdoğan suspected Egypt was "resentful" of ُTurkey for seeking to open an international investigation into the death of former Egyptian President Mohamed Morsi and because of its efforts with Russia for a cease-fire in Libya.

"Western countries, who try to teach everyone about human rights and freedom of the press, lose their voice when such things happen in countries they can manipulate. The whole world would rise up if a similar case occurred in Turkey," Çavuşoğlu said.

Earlier, the Turkish Presidency's communications director, Fahrettin Altun, said: "This hostile act by Egypt's coup administration toward Anadolu Agency staff displayed how low it can stoop. We condemn this hostile practice by Egyptian authorities toward the Turkish media."

The European Union, United Nations and U.S. State Department released statements, saying that they were "following the developments" and urging Egypt to release all detained.

Egypt, under the regime of el-Sissi, who seized power by ousting President Morsi in 2014, has seen deteriorating press freedoms. In November 2019, Egyptian security forces carried out a similar raid targeting the office of independent news website Mada Masr and briefly detained three of the website's staff. Earlier, the United Nations' human rights office urged Egypt to free a blogger and a journalist who were among several thousand people detained following protests against the el-Sissi regime in September.

Daily Sabah was also targetted in the Egyptian regime's crackdown on the press when its website was blocked in 2017. The newspaper thus joined several news outlets critical of the regime that eventually faced a media blackout with a ban on access.