Disaster in Elazığ: Getting off earthquake lightly, locals look for quick recovery 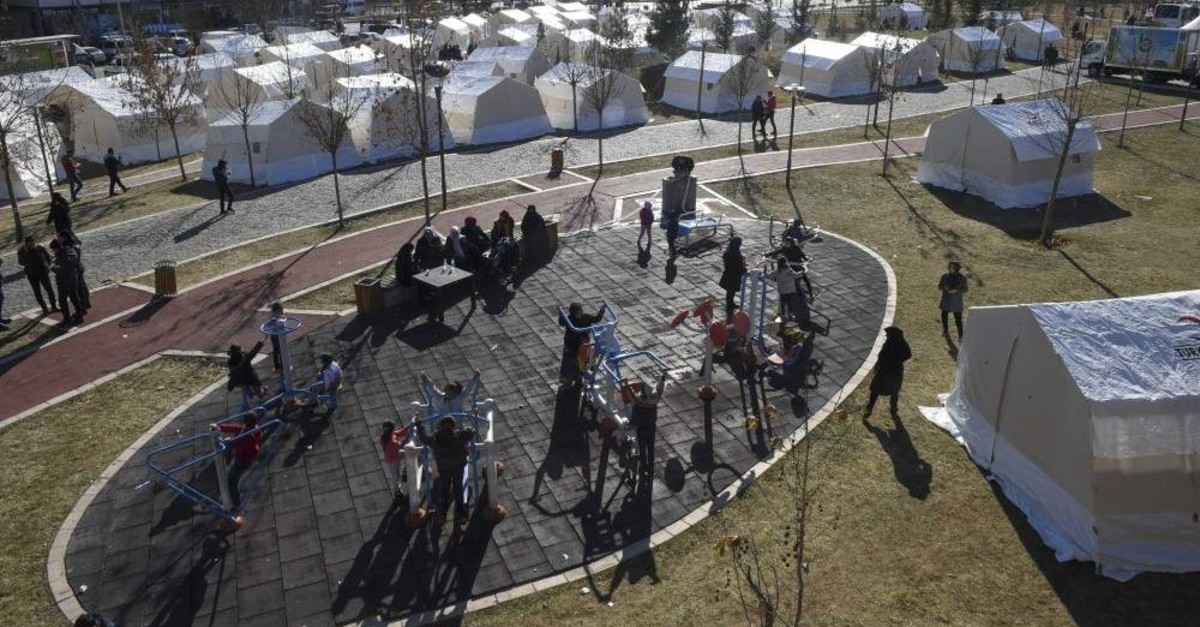 Residents are still anxious in the aftermath of a 6.8 magnitude earthquake that hit Elazığ and neighboring Malatya province, killing at least 41 people and leaving 1,607 others injured. Officials announced Monday that the last missing person was recovered from the rubble and search and rescue work had ended, although they will continue to scan collapsed buildings as an air of gloom hangs over the city. A group sitting in front of the city's historic İzzetpaşa Mosque fervently discusses Friday night's massive earthquake, "What we experienced that night, was like doomsday," says an old man to his friends.

When you listen to people walking on Elazığ's main streets, you witness the anxiety shared by the locals. The incident has become their sole agenda. Many are worried about their wounded friends or relatives. The metaphor about doomsday is being used by a lot of locals, notwithstanding that they are well aware that the city got off lightly from such a powerful tremor.

"Even though villages of remote districts were ravaged, we didn't have a very high number of casualties, thank God," says Bekir, a restaurant owner in Elazığ's central district.

In the villages of the eastern province, many houses are traditionally made of adobe bricks, which render it vulnerable to earthquakes. However, at the same time, these houses are also low-story structures, which makes it easier to escape from during long quakes such as the one on Friday that lasted about 30 seconds. Çevrimtaş, for instance, a village of Elazığ's Sivrice district, the epicenter of the disaster, has almost been wiped off the map. However, only two casualties were reported as people managed to escape from their houses safely.

Living on the fault lines

The region is very familiar with earthquakes because of the existence of the North Anatolian Fault (NAF), which stretches from the western part of the country to the eastern border provinces. The NAF line also passes through 20 kilometers south of Turkey's cultural and commercial capital, Istanbul. Numerous tremors have occurred on this fault line in recent history. One such earthquake hit Elazığ's northern neighbor Erzincan province in 1939, which was recorded as the strongest and deadliest of Turkey's Republican period. About 33,000 people died and more than 100,000 were wounded in the earthquake that completely destroyed the city and about 116,000 buildings collapsed.

Many more earthquakes occurred in the region later, including in Erzurum, Muş, Van and Diyarbakır. The 1999 earthquake in northwestern Düzce province also occurred on the same active NAF line and caused around 17,000 deaths, greatly affecting Istanbul too.

Accustomed to the situation for generations, locals not only in Elazığ but everyone living on this active seismic belt knows how to deal with the staggering effects of an earthquake. Yet, some are caught off-guard.

"I lived 30 years in Linz city of Austria, and we never encountered such disasters," says Veysel, who is originally from Bingöl province, the eastern neighbor of Elazığ. "I returned one year ago after buying a new house here. Now, we cannot enter our houses due to fear."

For thousands of people in a similar situation as Veysel's family, Turkey's Disaster and Emergency Management Authority (AFAD) has delivered 24,000 tents to the region.

Showing exemplary accomplishment in the execution of an emergency disaster plan, AFAD rescued 45 people alive from the debris in coordination with other emergency-aid teams such as the National Medical Search Team (UMKE) and Gendarmerie Search and Rescue Teams (JAK). Some emergency actions created emotional scenarios nationwide such as the rescue of a woman named Azize in Elazığ. An UMKE member managed to reach her through a cellphone and gave her instructions both in Turkish and Kurdish to provide relief to people around her, who didn't know either one of these languages. They were finally evacuated by intense efforts of UMKE teams. Also, the evacuation of 2.5-years-old Yüsra on Sunday sparked a wave of joy for the whole country.

AFAD and other organizations including the Turkish Red Crescent, municipalities and nongovernmental organizations have also been providing meals, blankets and beds for those affected by the earthquake. Their efforts have not only diminished the negative impacts of the disaster but have also instilled the hope of a quick recovery as promised by state officials.

After three days of the earthquake, the situation is getting calmer in the city. Sala, a call to prayer originally used to commemorate the death of a Muslim community member, is being recited from the mosques for the victims of the disaster. Despite some criticism, the majority of people are satisfied due to a pledge given by President Recep Tayyip Erdoğan for the quick replacement of damaged and wrecked buildings with new houses by state-run housing authority TOKİ. The interior minister has also said that a rent allowance will be provided to the victims. "At the end, it is our fault that we did not take the necessary precautions," says one man on the radio playing in a restaurant. All experts are in agreement regarding the necessity of rapid urban transformation throughout Turkey. Considering that all regions of the country except central Anatolia are under threat by at least one fault line, many citizens probably share these thoughts.