Reconstruction, recovery next for quake-hit Elazığ in eastern Turkey 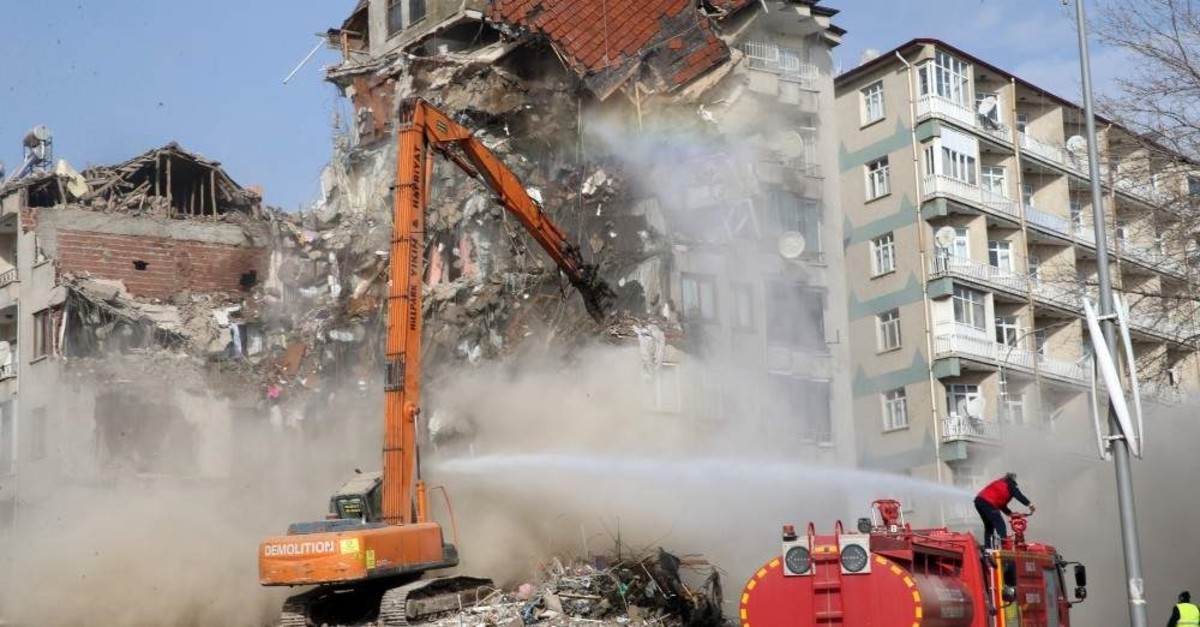 As search and rescue efforts draw to a close, Turkey is launching reconstruction plans for Elazığ and Malatya, where residents are slowly beginning to recover from a powerful earthquake that killed 41 people across the region

Life is slowly beginning to return to normal in the eastern provinces of Elazığ and Malatya, where a 6.8 magnitude earthquake hit last Friday. Search and rescue efforts came to close as crews combed the last remaining sites of rubble in neighborhoods around Elazığ on Monday, as the ultimate death toll came to 41.

The government has now turned its focus to addressing survivors' most urgent need: accommodation. Officials announced Tuesday the launch of plans to reconstruct new homes aimed to be completed by the end of 2020.

Those who managed to escape from collapsed buildings or are too scared to go back into their damaged homes are being sheltered by tents set up by various government agencies at sports halls, schools and other public spaces opened up for survivors in the aftermath of the disaster.

Murat Kurum, minister of environment and urban planning, who has been in the disaster zone since the earthquake, told reporters in Elazığ on Tuesday that they had initially launched plans for the construction of 3,850 housing units. He noted that the construction is scheduled to be concluded by the end of the year.

The demolition of heavily damaged buildings began with haste on Monday. Ministry of Environment and Urban Planning crews demolish the buildings after vacating the premises of furniture and personal possessions. Kurum said an area in two of the most affected neighborhoods in Elazığ were declared too risky to reside in. He said they would first build 200 apartments in 10 blocks over an area covering 10,242 square meters for people living in one of the neighborhoods. He said they already had 400 housing units available to provide accommodation to survivors in Elazığ.

Currently, prefabricated housing units are being set up in Elazığ's Sivrice district, where 350 housing units will also be built.

Reconstruction efforts will not only cover central Elazığ but also surrounding villages where smaller houses, mostly those made of adobe bricks, will be replaced by sturdier structures.

Minister Kurum said urban renewal projects would continue nationwide, in reference to ongoing work to replace older buildings, mostly those susceptible to damage from tremors, with new, stronger buildings across the country. The government last year launched the next stage of a plan which aims to ensure at least 300,000 units are demolished and replaced within five years, including 100,000 in Istanbul, the country's most populous city.

In light of the scarcity of land and concerns remaining over the possibility of future disasters in the country, which sits on several active fault lines, Turkey is already in efforts to accelerate urban renewal projects, with the latest stage of its attempts launched last year, the most ambitious to date.

The authorities also started paying rent allowance for tenants of 58 buildings collapsed in the earthquake. Interior Minister Süleyman Soylu said Tuesday that crews reached out to some 200 villages in Elazığ and Malatya to supply survivors with tents. He said they set up 10,000 tents in central Elazığ for survivors.

He said that the government had already delivered cash assistance of TL 24 million, with an additional TL 20 million being delivered to Elazığ and Malatya to cover the victim's needs. The government will also deliver 30,000 tons of coal to villages of two provinces.

A moderate earthquake struck western province of Manisa on Tuesday, about one week after the city was hit by a major earthquake. The earthquake, the epicenter of which was in Kırkağaç district, had a magnitude of 4.8, according to the Disaster and Emergency Management Authority (AFAD). It was felt in nearby cities, as well as Istanbul, some 360 kilometers north of Kırkağaç. Television footage showed people running into the streets for safety though there were no reports of injuries. An abandoned house collapsed in a village near Kırkağaç. Officials said that the earthquake occurred at 2:26 p.m. local time at a depth of 6.99 kilometers.