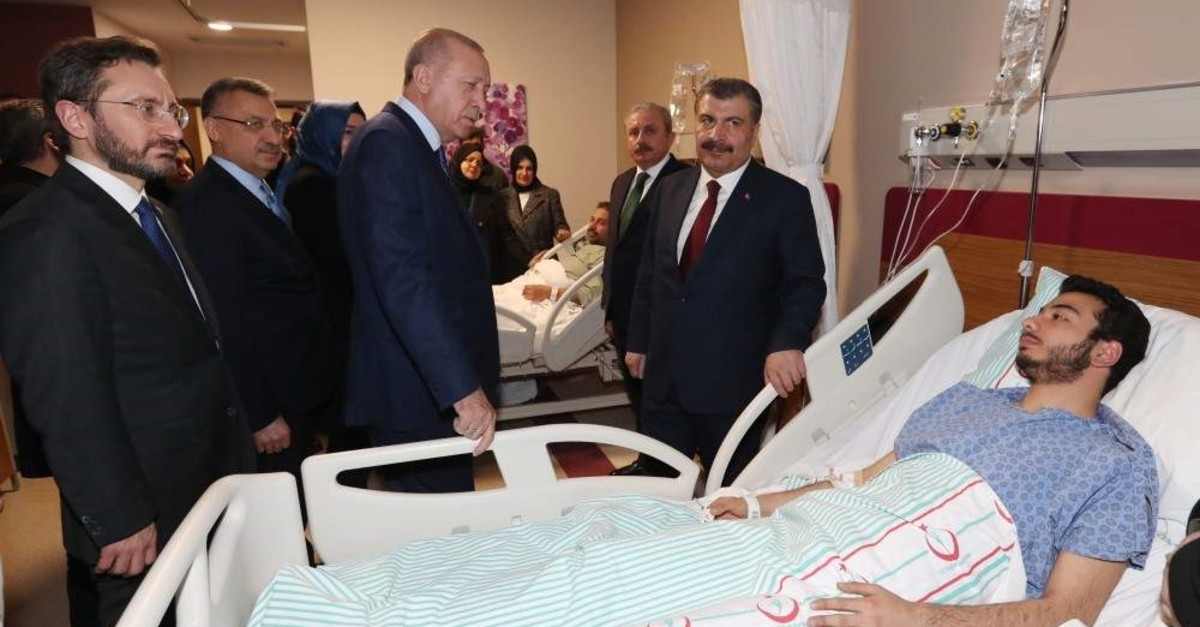 President Recep Tayyip Erdou011fan visits injured earthquake victims at a hospital in Elazu0131u011f, Jan. 25, 2020. (AA Photo)
by daily sabah Jan 29, 2020 2:46 pm
Turkish lawmakers have launched an aid campaign to support recovery efforts in earthquake-hit Elazığ. Parliamentary Speaker Mustafa Şentop announced the campaign on Wednesday. Funds donated by lawmakers will be delivered to the Disaster and Emergency Management Authority (AFAD), which is coordinating aid and reconstruction efforts in the eastern provinces of Elazığ and Malatya.

Speaking to reporters during his Africa trip yesterday, President Recep Tayyip Erdoğan said everyone should offer whatever assistance they can provide to the earthquake-hit areas. Erdoğan also lashed out at opposition parties that have accused the ruling Justice and Development Party (AK Party) of misspending past earthquake aid.

"We are doing what we are supposed to do and spending funds [on the victims]. We don't have time to give Mr. Kemal an account of what we have done," he said, referring to main opposition Republican People's Party (CHP) chairman Kemal Kılıçdaroğlu.

He also criticized Kılıçdaroğlu for not visiting the disaster zone. "During my tenure as prime minister and president, all the money allocated for a given purpose has been spent for that very purpose. We have never spent money allocated [for disaster recovery] for another purpose," Erdoğan said.

The president also pointed out that history would "be the witness" of what the government has done for the earthquake victims, noting that they would undertake construction of new houses for survivors.

He said every state official, from Vice President Fuat Oktay to cabinet ministers, have been working in the disaster area since the tremors first hit and planned to continue to allow for the smooth delivery of aid to survivors so as "not to leave anyone without food or shelter or other essentials," he said.
RELATED TOPICS