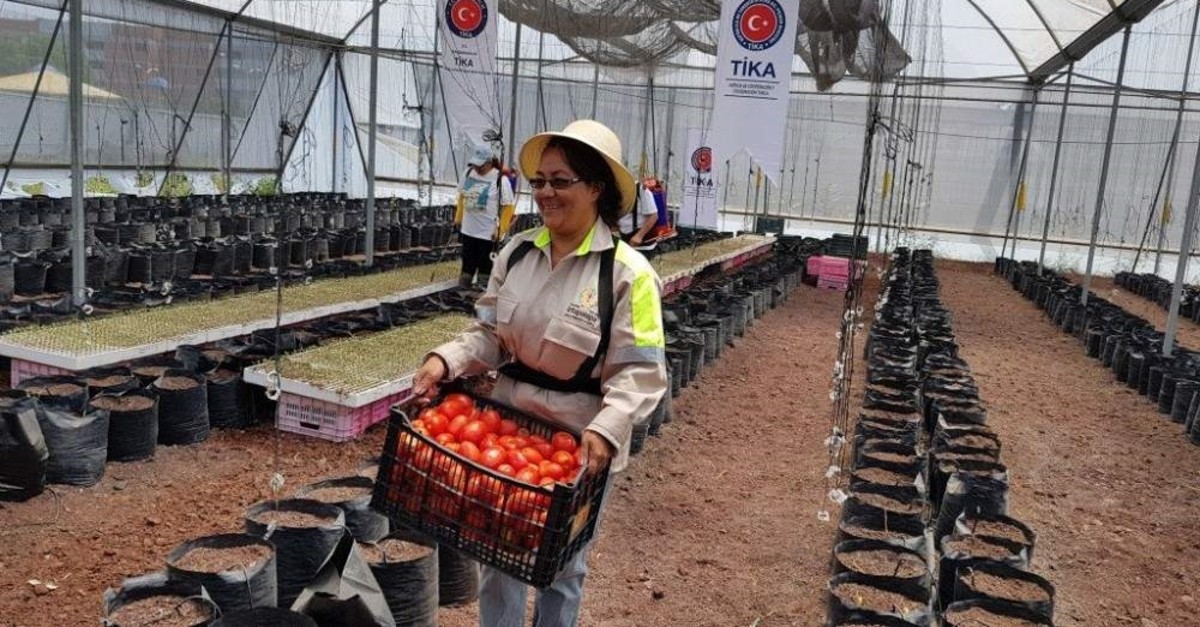 Women work in a greenhouse renovated by TIKA in Iztalapa, Mexico in this undated photo. (AA Photo)
by Daily Sabah with AA Jan 30, 2020 1:05 pm

TIKA, which evolved from a little-known state agency to a juggernaut for Turkey's international development aid, marks its 28th year by reaching out to more countries

With thousands of projects realized since its establishment, Turkey's state-run aid and development agency, the Turkish Cooperation and Coordination Agency (TIKA), is marking the 28th anniversary of its foundation this year.

TIKA was founded on Jan. 24, 1992 as a government-run agency to help countries in Central Asia and the Caucasus, which gained independence following the 1991 collapse of the Soviet Union. Operating under the auspices of the Foreign Ministry for seven years after its foundation, TIKA started in 1999 to carry out projects under the now-defunct Prime Ministry.

The aid agency, which started its operations with offices in Turkic nations in Central Asia, expanded its coverage, launching news offices in various countries. Since its establishment, it has carried out approximately 30,000 projects in nearly 170 countries on five continents.

In an exclusive interview with Anadolu Agency (AA), Serkan Kayalar, TIKA's acting head, said: "The development of TIKA has parallelled the development of Turkey. It is also directly related to the foreign policy of our country." TIKA carried out almost 90% of its projects after 2002, when the ruling Justice and Development Party (AK Party) came to power, and it has implemented more than 25,000 projects and activities since 2004. The aid agency had 12 offices abroad in 2002, and the number rose to 33 in 2012, according to Kayalar. It is currently active in five continents with 62 offices in 60 countries. In 2005, TIKA opened its first office in Africa, and it currently has 22 offices on the continent, he added.

The agency has produced tangible, modern and highly sustainable projects in a wide area from South and Central Asia to the Balkans and from Africa to Latin America, Kayalar said. Its work area covers education, health, infrastructure, restoration, culture and humanitarian aid. Last year, TIKA implemented approximately 2,000 projects in more than 100 countries. It helped nearly 100,000 students benefit from educational services with 346 projects.

In health care, it carried more than 140 projects to reach some 900,000 people, while providing vocational training for nearly 5,000 doctors, civil servants and experts. During the Islamic holy month of Ramadan, TIKA organized dinners to break daily fasts (iftar) in 150 cities in more than 50 countries. The agency restored 21 buildings in about a dozen countries and supported some 120 events, including symposiums, panels, scientific gatherings and conferences. In addition, the restoration of 11 buildings by TIKA in six countries is ongoing.

Since 2011, the agency carried out restoration and renovation work on 90 historic structures, including mosques, tombs, madrasahs, clock towers, castles, Turkish baths, complexes and fountains. The aid agency launched its 62nd office in Nicosia in the Turkish Republic of Northern Cyprus (TRNC) last December. It plans to open its next office in Nigeria this year. For the next three years, TIKA aims to realize 190 projects for the construction, equipping and renovation of cultural facilities. It also plans to carry out 51 restoration projects, including 20 in the Balkans and Eastern Europe, 17 in Central Asia and the Caucasus, 10 in the Middle East and Africa, four in East and South Asia Pacific, and others in Latin America.

Turkey's approach in development cooperation is renowned internationally with its human-oriented, nondiscriminatory, sincere, transparent, equal relationship and partnership. Kayalar said it takes into account the priorities and needs of countries, respecting the environment, local culture and national values. "The world is a place where inequality increases. There are serious difficulties in global development and especially in the field of aid abroad regarding access to the field," he said. What distinguishes TIKA from other similar organizations across the world is that the Turkish agency responds directly to the demands of people and countries, Kayalar said. TIKA uses almost all of the budget allocated for a project in the field, he added.

Also in Iraq, the agency completed the restoration of the Sheikh Abdulkadir Geylani Complex in the capital Baghdad, the historical Kayseri Bazaar – devastated in a fire in the city of Kirkuk – and the tombs of Abyssinian King Najashi, who accepted the first Muslims fleeing Arabia, and his companions in Ethiopia, and these sites are ready to open.

TIKA will start the restoration of the İmami Azam Complex in Baghdad, the construction of Tunyuquq the Wise Museum in Mongolia and the Center of Excellence in Pakistan's capital Islamabad as part of these efforts as well.
RELATED TOPICS